The opening moments of Jallikattu are some of the purest cinema you’re apt to see at this year’s fest. Told through an extended series of quick cuts set to the percussive chants of a tribal chorus, we see a thorough breakdown of commerce in the village at the story’s center. But this economy is not one based in legal tender, but rather in access to pieces of a recently slaughtered buffalo. We watch as it is corralled, slaughtered, broken down, and distributed for a variety of consumptive purposes. The buffalo becomes food, grease, lamp oil, clothing, etc. It’s a bit gruesome, but right off the bat two things are clear: no amount of the animal will go to waste, and to lose a buffalo for any reason would be a punch in the guts of the local economy. This is precisely why it’s such an earth-shaking concern when a second buffalo escapes capture just before being slaughtered for the next, uh, fiscal rotation.

A loose buffalo is not just a potential economic loss, but also a physical danger to anyone unfortunate enough to be found in the distraught animal’s path. This notion puts multiple villages on lockdown, while also inspiring the men of each village to begin individual ego-based campaigns to not just take possession of the animal and its eventual spoils, but to earn the reputation of being the one guy tough enough and smart enough to have done so. With this much testosterone flowing, the capture effort gets an bit muddled and more than a bit dangerous. 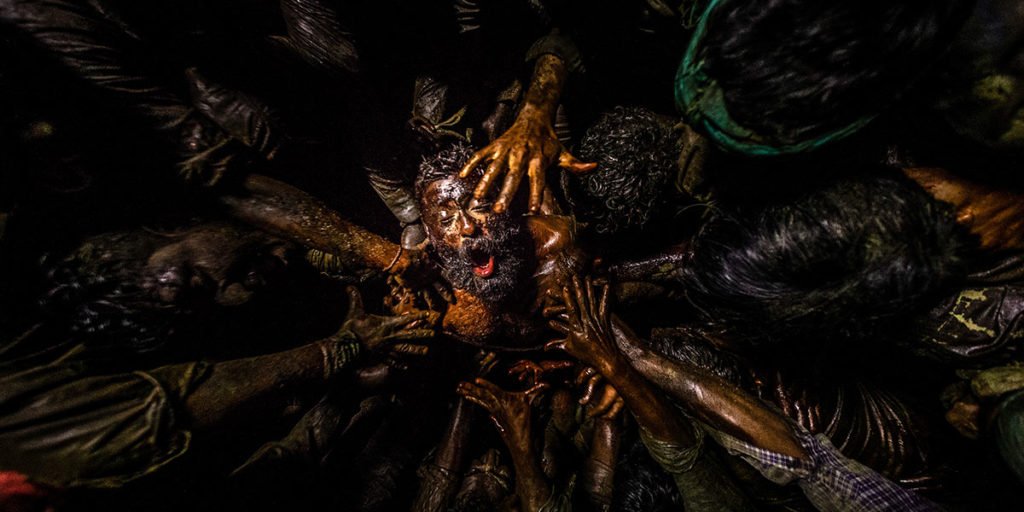 A combination of handheld camerawork, animal-mounted GoPros, and some seriously resourceful blocking, filmmaker Lijo Jose Pellissery creates a lot out of a little. There’s just no way a film with such a sparse budget could afford to have people running afoul of a real live buffalo bull, yet the clever way Jallikattu is shot creates that illusion with few seams. The danger and excitement are felt. Unfortunately, the character material leaves some room for improvement.

With a cast this large, and with most of the dialogue being delivered in a sustained group scream, it’s often easy to lose track of the smaller plot threads. Of the hundreds of men chasing the buffalo, a few are elevated to higher plot consideration, each of which are at odds with one another for reasons beyond just the escaped beast. While Jallikattu takes pains to make sure we know the degree of anger within these clashes, the specifics are often lost. At one point, two lead characters throw down in a brutal fistfight, but I found myself wondering why they hated each other so much. The specifics were lost in the calamity, and I am unable to tell if that was my fault as a viewer or if the movie left some of the material incomplete.

No matter, by the time Jallikattu rides an intense crescendo of violence into its third act, the film reaches a state of high art, where craft and theme meet in bloody reference to the Tower of Babel, a monument to male ego that is destined to crumble under the weight of so much greed. While not a perfect film, you’d be hard pressed to find something so unique as Jallikattu at the multiplex. As a window into a culture not often seen in our media, it’s not to be missed. And that’s no bull.