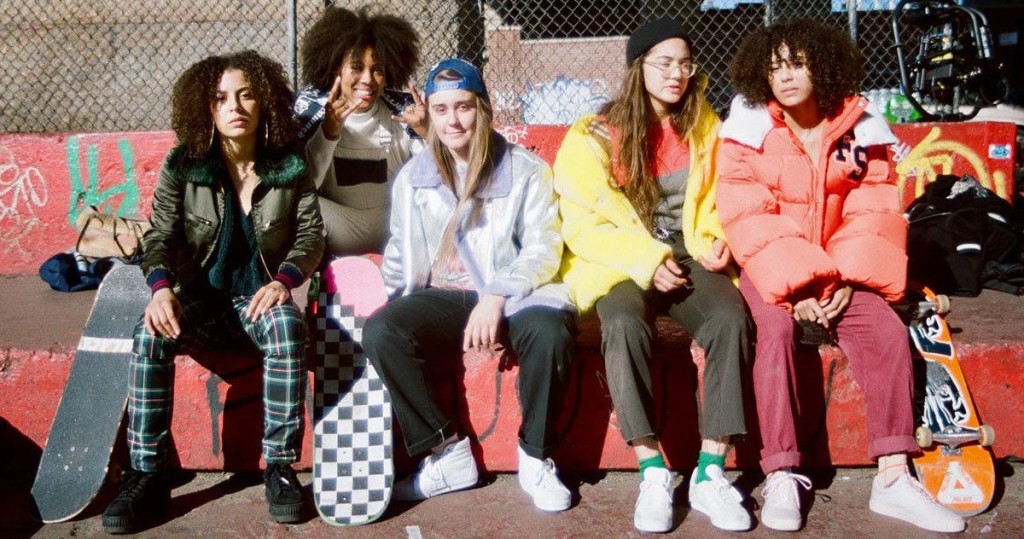 While watching Skate Kitchen, I found myself entertained, engaged, and delighted, but it wasn’t until it ended – until I realized that rolling credits meant the end of my time spent in its delightful, energetic depiction of New York skate culture – that I noticed I had just witnessed something special. In keeping with tradition of the greatest “slice of life” movies, Crystal Moselle’s coming of age drama opens a window to a world which many, myself included, will find unfamiliar. This is all by design, of course, because plot-wise, this is a rather uneventful film. The story at the center of Skate Kitchen is all about character, which when combined with an honest look at New York youth culture, results in a supremely enjoyable, relevant hangout film.

Also, it really made me want to play Tony Hawk’s Pro Skater again, which remains the closest I’ve ever come to any sort of skill with a wheelie-board. That, and the two times I went to Warped Tour.

Camille (Rachelle Vinberg, in one of the best performances of the year) is a talented young skateboarder who lives with her mother on Long Island. One day, after a mild but bloody injury (being “credit carded” is what this specific injury is called – I’ll spare you the details), Mom forbids her from skating, but as these things go, she just can’t resist. Via a social media presence between skaters who post videos to Instagram, Camille finds herself hopping the train into the city in order to sneakily skate behind her mother’s back. Thing are a bit different in the city. People are a bit more prickly, the skatepark isn’t quite so welcoming, especially to females and newcomers, but Camille soon finds fast friends amongst an all- girl group of skaters. They take her under their collective wing, and soon enough she’s no longer an outsider – just part of the crew. With this new set of friendships comes a new set of social obligations, and as Camille navigates this unfamiliar world, dealing with the backlash of disobeying her mother, she is forced to grow up in ways she’d never have imagined.

Shot and edited with all the excitement of a skate video (with many portions that pretty much ARE a skate video), Moselle’s camera captures the energy of a not-so-underground fringe of NYC youth, for better or for worse. But any judgment toward the characters is our own, as Moselle, working from a script by Jen Silverman, Aslihan Unaldi, and Moselle herself avoids criticisms of any one character. Everyone is acting from believable, real-life motivations, which gives the lightly plotted film a natural, engaging flow. Oftentimes, characters will converse through voiceover while the images on screen depict the conversation in a sort of montage set to the ambient sounds of the city streets. This captures the feeling that many adolescents have where it seems as if one’s actions are of no consequence to unforgiving, ever-changing surroundings, while also highlighting the freewheeling spirit of youth. The frustration of assumed unimportance coupled with the belief that anything is possible have made many a teen feel both powerful and lost, and Skate Kitchen took me back to those times effortlessly. It snuck up on me, really.

And that’s the magic of the film. As these cocky, confused, posturing teens hammer their way into some semblance of identity while looking down at the streets of New York from windy rooftops, it became clear how much I don’t really envy their place in life, but also how much I didn’t want to leave their world. I am reminded of those formative years where every little thing feels monumental, and none of the big stuff seems to matter so long as you keep gunning forward as hard as you can. As I get older, it’s fun to be brought back to those times in my life. As it dawns on me that I am more than officially a “grown-up,” it’s increasingly valuable to remember how the world looks to a teenager, and how easy it is to become jaded in adulthood.

Also, Jaden Smith is in it. You can feel about that however you wish (he’s good).