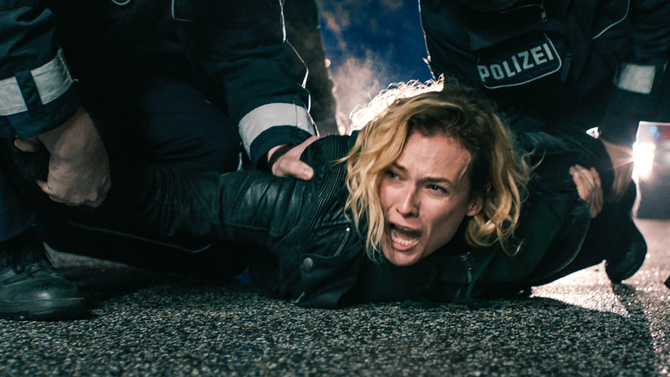 Diane Kruger (Inglourious Basterds) was honored with the Best Actress award at Cannes for her portrayal of Katja, a woman seeking justice after her husband and son are killed in a bombing attack. The honor is deserved. Kruger’s grief, frustration, and drive are all true-to-life, which is what fuels this exciting, atypical revenge thriller.

The film is broken into three parts. The first establishes Katja’s relationship with her family and takes us through the bombing. The second brings us into the courtroom where the perpetrators of the bombing stand trial for their crimes. The third follows Katja as she decides what to do in the wake of the trial.

The courtroom scenes are some of the best in recent memory. Denis Moschitto puts in a rock solid turn as Katja’s lawyer. The scenes in which he is debating the defense are exciting, and it’s just as interesting to watch him work the system on both strategic and methodical levels as it is to study the differences between a German trial and an American one. The slight alterations of format allow room for all the high energy courtroom bickering that procedural fans know and love, but with a decidedly unique flavor afforded to it by its foreignness. For example, the way that the lawyers punctuate their ranting knowledge-drops with a loaded ‘thank you’ evokes things like Philadelphia and A Time to Kill, but in a way never before seen (I get the sense that the phrase is a formality, much like ‘your honor’ which is dramatized by litigants to great effect).

The third act brings us into what should be a typical revenge tale, and in a lot of ways it is, but In the Fade is less concerned with the catharsis of vengeance than it is the ethical questions that revenge naturally raises.

Here’s hoping this gem gets a wide release.