The setting of this complex performance is based on Vietnam. We are waking up in Saigon to the voice of Martin Sheen. The voiceover is convincing, and this man is coming to consciousness on a flower motif mattress. This mattress seems to represent the shitty hotel.  An army lead by Colonel Kurtz, played by Marlon Brando, is the end result. This is Chris Davis’s re-staging of his 2016 Fringe hit ONE-MAN APOCALYPSE NOW (read a Phindie review here). 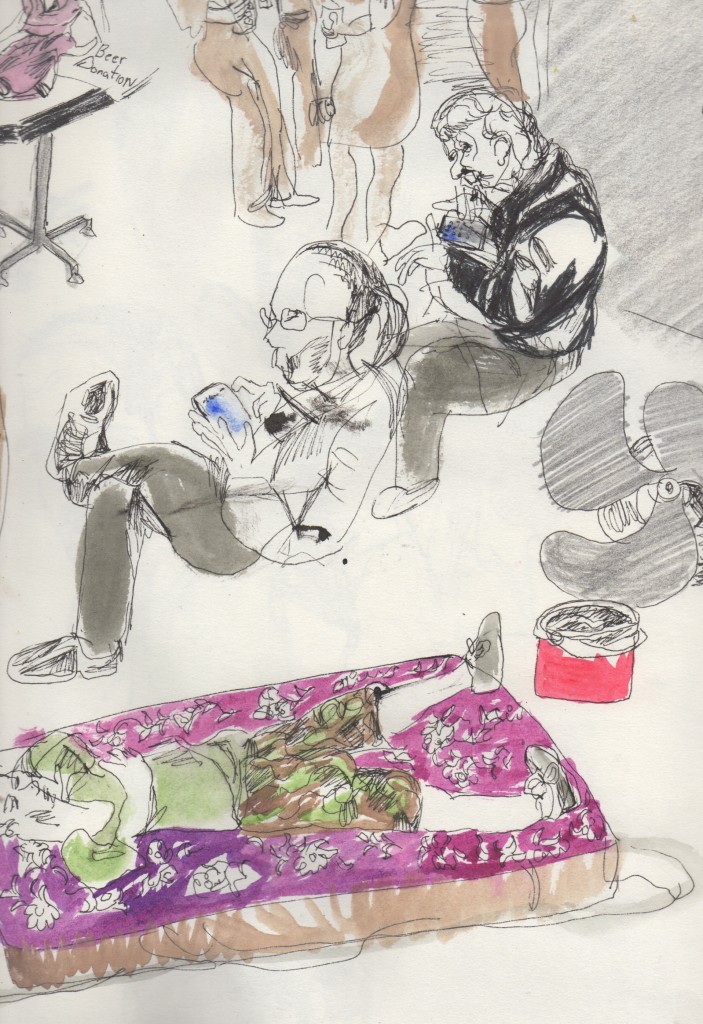 Chris Davis gets up to take on many roles: entering a war he goes insane, and he makes different points about being a soldier, an entertainer, a commander, or a hero. The omniscient perspective is allowing us to transcend his irrational state of mind. I get the feeling that it revolves around this insomniac and relates back to the mattress in the shitty hotel. 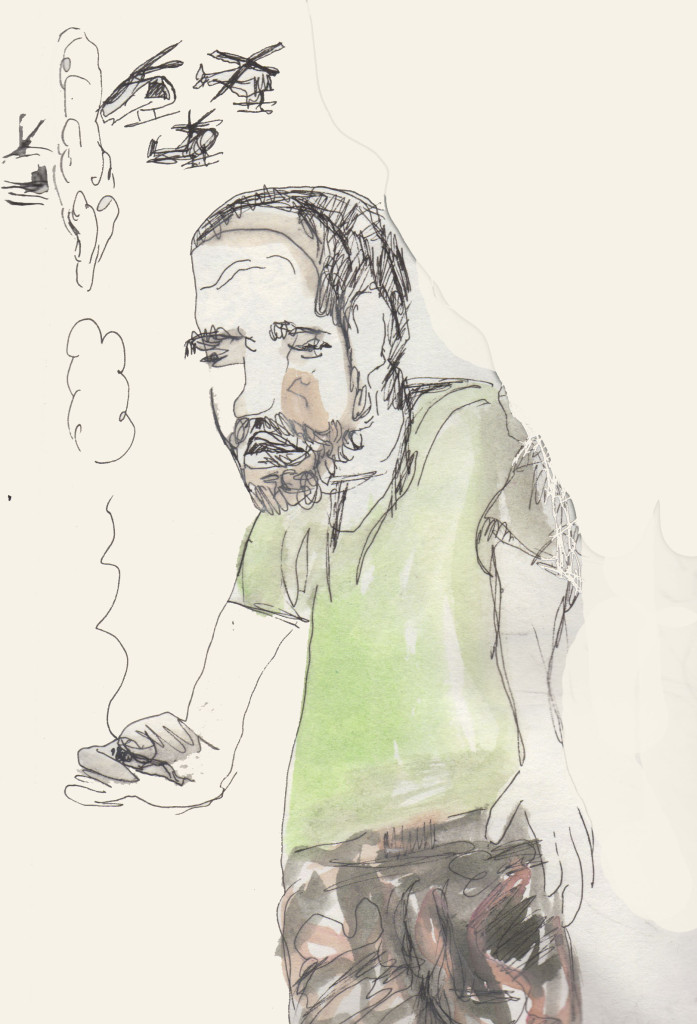 With very little costume and first off we are in a cement basement. I am with half a dozen others waiting to go into the theater. There are beverages handy, and the hall way is like a body of a Vietnam War Aircraft. Making us part of the story of going to war sets the stage for military transport. 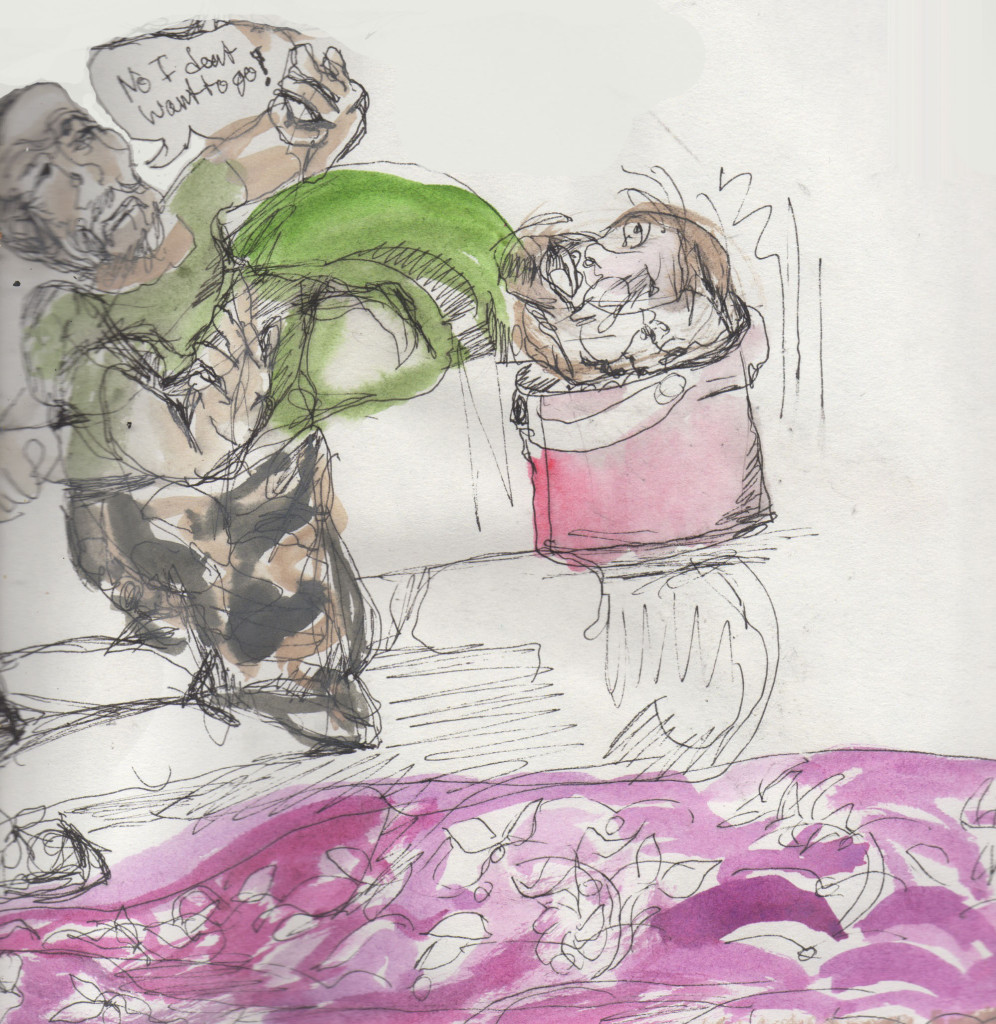 We are in a cement basement and it adds to the black box effect. I am with half a dozen others waiting to go into the theater. We are told to take a seat in the hallway. It is like a body of a Vietnam War Aircraft. There is a staircase down to the basement like a bunker. The transfigured civilian into military camouflage attire comes to mind. 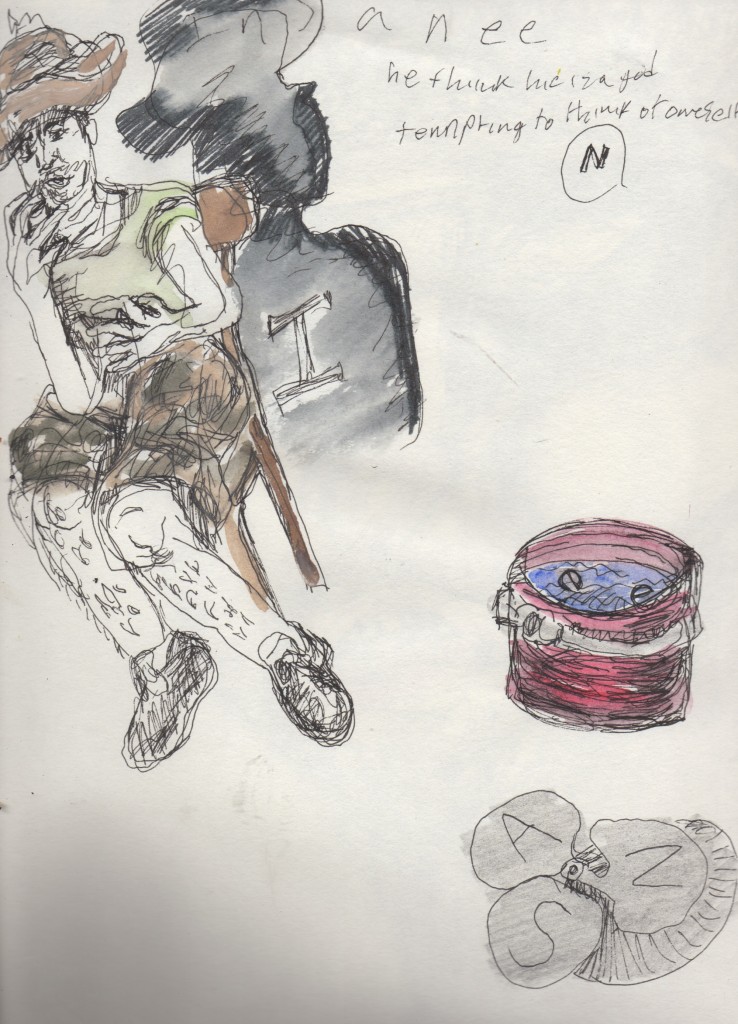 As an art performance Chris Davis shows various stages of Apocalypse Now (1979) and he takes the viewpoint of a journal reading. Chris Davis washes himself from a bucket, brushes his teeth, and with a sick sense of humor there is tension between us in the audience, the vigilant and the story of a madman. 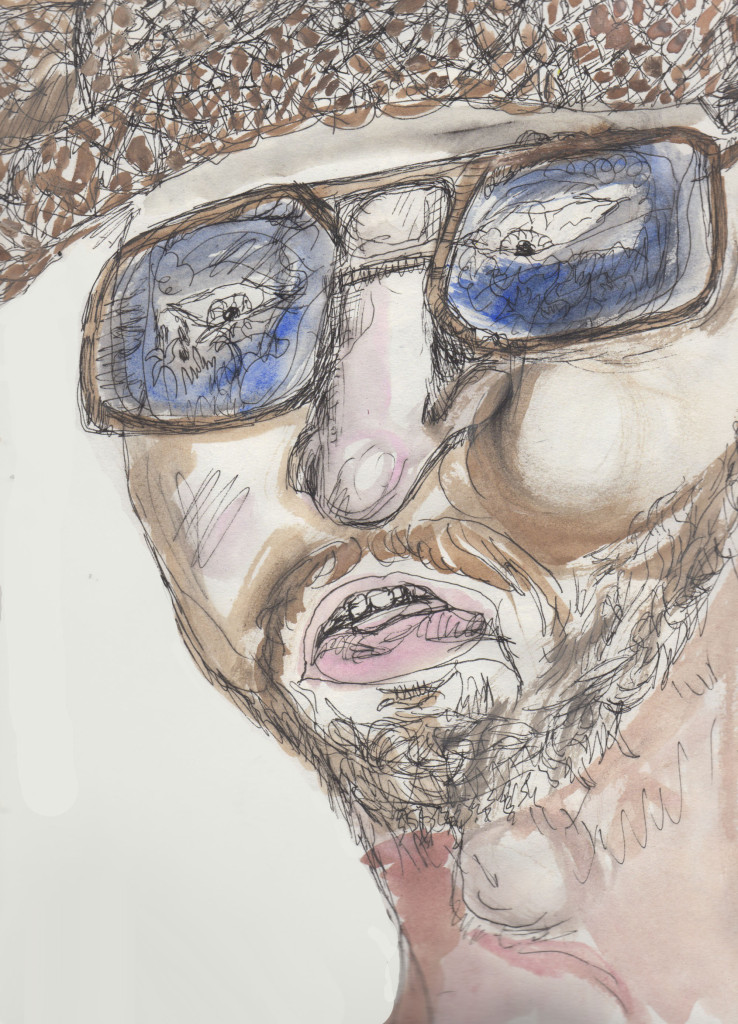 For one minute he is Colonel Bill Kilgore taken directly from dialogue in the movie, and then he gives a bottle of Southern Comfort whiskey to someone in the audience. We thought it was about to get real,”is he really going to drink it?” This turn of events imitates the attitude of American patriotism, “did they really believe in this war?” Short stunts like this one are throughout the performance to hint at the context of Vietnam War movies. They flew over seas, leaving behind a home or a family, and arriving in an unknown world not knowing what/who to believe. 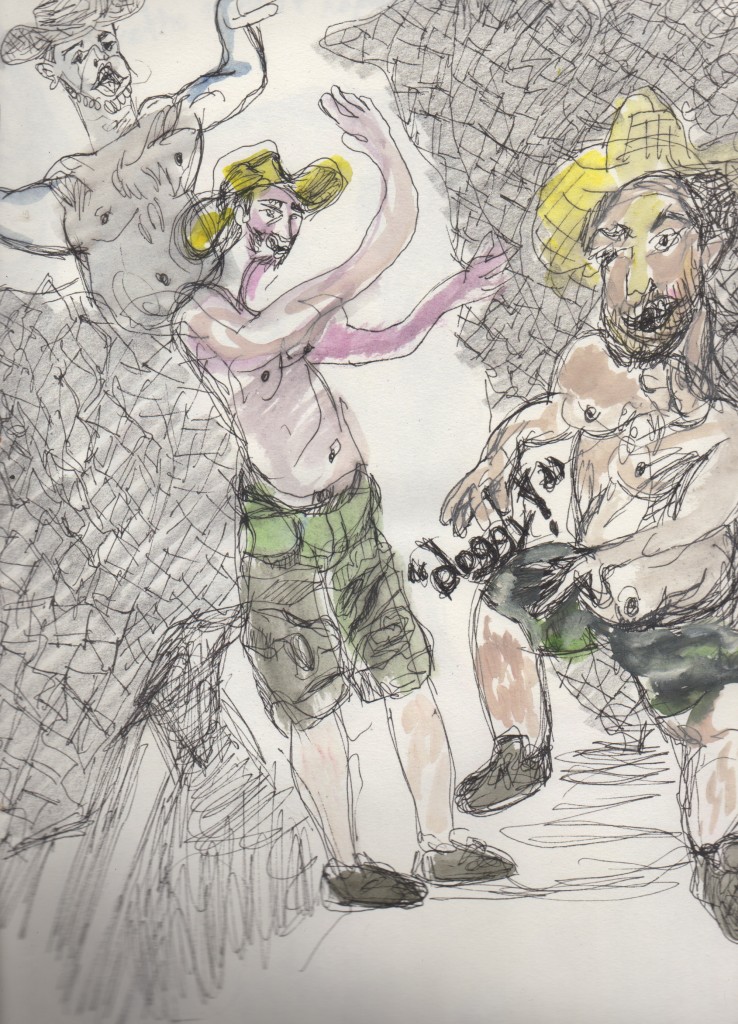 The politics of the Vietnam War in history created a fictitious character, and I think Colonel Kurtz was a product of malicious military activity. Chris Davis is Marlon Brando, the stage is completely dark and all we can see is his bare back. 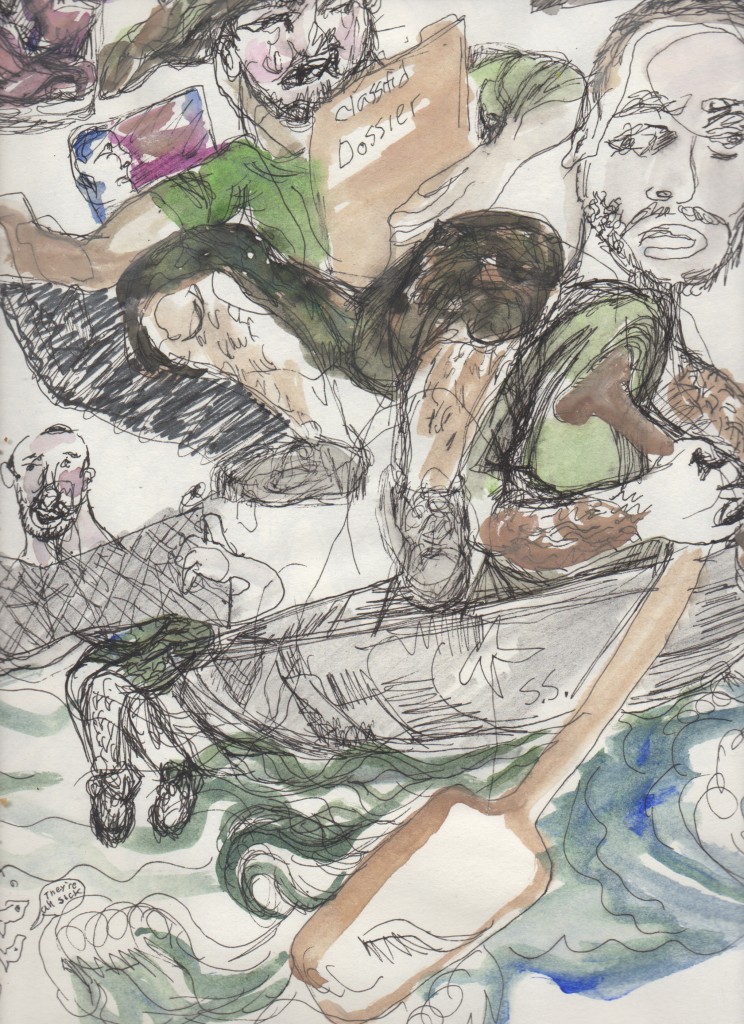 A Chris Davis performance is like a form of puppetry for myself and he is using his own body to stand in for a dummy. He throws himself into the story, and funny enough is this play to me is about a Philadelphia actor going to Scotland. I find this kind of performance internalized and with Willard’s own words, “Close enough to blow their last breath in my face.”