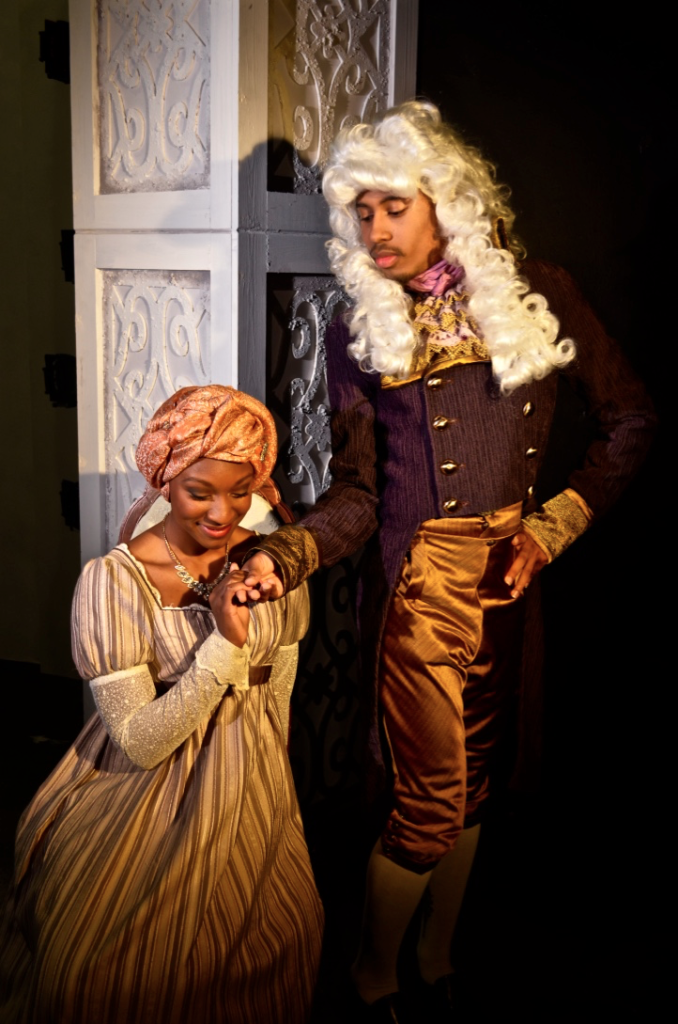 John Guare’s play about race relations in an early 19th century New Orleans that went quickly from Spanish to French to America jurisdiction, is sprawling and convoluted under the best of circumstances. Though Guare remains fairly astute and accurate about history, he tries to cram too much into this play, and in addition to going on and on beyond anyone’s patience to absorb all he’s revealing, he jumps from style to style and plot and plot, at one point appropriating Ben Jonson’s Volpone and William Wycherley’s The Country Wife simultaneously to serve his needs. Guare’s work is messy, but Douglas C. Wager’s production of A FREE MAN OF COLOR for Temple Theaters is messier.

Wager calls it a phantasmagoria and seems to think that gives him carte blanche to do an outrageous vaudeville that never takes the time to establish mood, attitude, or personality. Wager’s production is more haphazard than Guare’s script and not nearly as interesting.

Guare’s lead characters, Jacques Cornet (Juspin Jones), is one of the richest men in New Orleans based on his own swindling abilities, his tight-fistedness, and a legacy left by his stepfather, a legacy his stepbrother resents him having and schemes to get back or at least share. Cornet is a mulatto, but that doesn’t mean too much in New Orleans, which in 1801 is governed by Spain and not subject to the newly formed America’s laxity about curbing slavery. Slaves exist in New Orleans. Cornet owns some. But slavery is not the automatic lot of people of color in the Gulfcoast city’s free-wheeling environment. Cornet being a mulatto is not as important as his being despised by others of varying mixed race because of his wealth, arrogance, and womanizing, including with married woman. Octoroons and others are happy to brand Cornet a candidate for slavery because of his jealousy and disdain for his studiedly independent lifestyle.

As mentioned, Guare adds historical context in scenes featuring a beset Napoleon and a wishy-washy Thomas Jefferson, who never comes to any useful decision about slavery and who makes matters worse from some people of color following America’s acquisition of New Orleans via the Louisiana Purchase of 1803. These historical scenes, if done well (which they’re not) should provide insight into the origin of racial tension throughout American history.A FREE MAN OF COLOR should be thought-provoking, but Guare is too smugly self-conscious, and Wager gives the Temple production no form.

Nothing in it takes hold. You can’t savor what Guare does well or the potential quality of Kalen Allen’s lead performance. It’s a three-hour bore from beginning to end, any interest coming from pondering subjects and issues Guare brings up rather than from how the playwright handles them dramatically or the director attempts to put them on stage. Wager’s production accomplishes nothing. It is disjointed and without a consistent pace or central focus.

Juspin Jones gives impressive performances as both Cornet’s slave, Murmur, and Haitian hero and would-be liberator Toussaint Louverture. Good work is also turned in by Savannah Jackson as the wife of Cornet’s stepbrother, K.O. DelMarcelle as a French woman with an intellectual bent her husband disdains, and James A. Reilly as the resentful, plotting stepbrother. David Lawrence Glover gives as much depth as Wager will let him to Cornet’s doctor and friend, Dr. Toubib. Guillermo Alonso has some witty moments as Napoleon. A more thoughtful, more careful production may not be able to rescue Guare’s play from its own sheer mass, but one could make it more enlightening and instructive. As it stands, Wager’s FREE MAN was an exercise in theatrical futility (as opposed to a trenchant look at human futility).