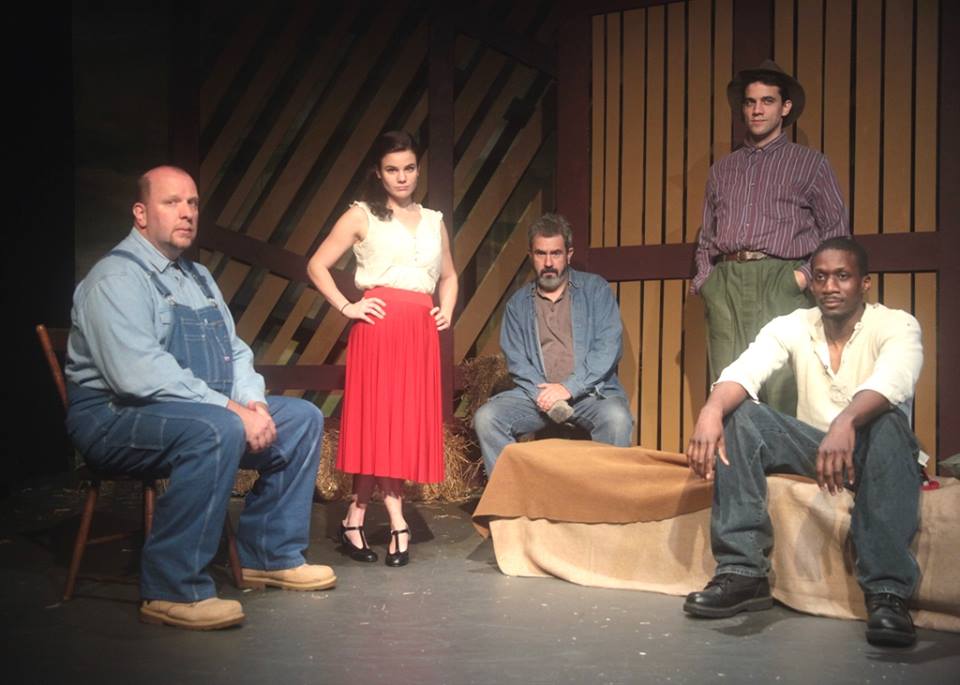 How’s this for enduring: the charming Stagecrafters Theater in Chestnut Hill is in its impressive 87th season, presenting the 532nd production OF MICE AND MEN. Based on the classic, insightful novel by John Steinbeck, the play delves into the hardship of two migrant workers during the Great Depression and a time when each man was for himself and there was little forgiveness.

George (Brian Weiser) is a determined, industrious man who—despite the troubles it brings him—keeps a promise to look out for Lennie (Joe Forsstrom), a man with the mind of a child but tremendous physical strength that surprises even him. They make their way to a ranch in rural northern California for work where they meet their new Boss (Michael Tamin Yurcaba), his easily despised son Curley (Patrick Cathcart), and Curley’s gorgeous, lonely wife Mae (Jilly Schwab). They meet new friends and fellow ranch workers Candy (Robert Toczek), Slim (Jim Broyles), Carlson (Patrick Martin), Whit (Bill Amos), and Crooks (Tim Richardson).

Stagecrafters delivered OF MICE AND MEN in the way it was intended—evoking emotion and showing us the sad era in our history when most men were doomed to lonely existence, street justice was the rule of the day, and life was simply hopeless. The set was beautiful; there was such genius in its simplicity just like the novel. On opening night, the actors were honing their script delivery and the flow of the performance but managed to portray the book for what it is—a story of an unforgiving world.  Director Christine Pappas helped convey this message by guiding the actors to indulge in the guts of the story. Particularly Forsstrom met the expectations of his character Lennie, a consistent style of speech, unique mannerisms, and demeanor that portrayed a man with an intellectual disability with an understanding of how he differs in that society. The actors showed us the thankless world with the rare glimpses of camaraderie that were heartwarming but especially painful in light of unavoidable tragedies.