The annual Barrymore Awards celebrate and reward the best in Philadelphia theater. In advance of the award announcements this Monday, November 2, 2015, at the Merriam Theater, Phindie spoke to Steve Pacek, director of this year’s ceremony. The associate artistic director of 11th Hour Theatre Company (which has itself received a share of nominations and awards), Steve has sat on the board of award organizer Theatre Philadelphia since it formed several years ago. He shares some memories and thoughts on Philadelphia’s premiere performing arts awards. 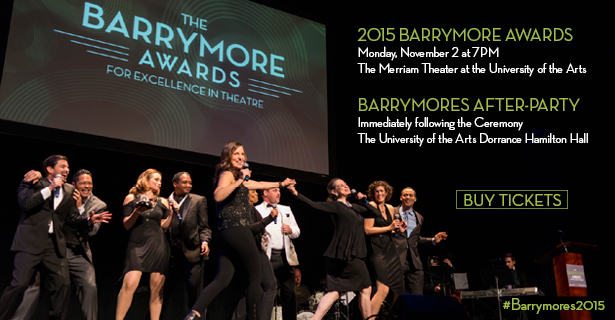 Phindie: Can you share a favorite memory from an award ceremony past?

Steve Pacek: A few stick out in my mind: Carla Belver’s acceptance speech for the Lifetime Achievement Award last year; when I won the Haas Award in 2012 and didn’t havie a speech prepared; 11th Hour winning the first June & Steve Wolfson Award; and hearing Christine Andreas sing Bewitched, Bothered and Bewildered from Pal Joey in 2003. Breath-taking!

Phindie: What excites you about this year’s ceremony?

Steve Pacek: This year’s ceremony is a celebration of the Philadelphia theater community as a whole: So many different companies and artists are represented among the nominations. The work of over twenty different companies will be celebrated and numerous individual artists. Johnnie Hobbs, Jr. is receiving the Lifetime Achievement Award. Five outstanding emerging artists will be honored. Six evolving theatre companies will be spotlighted. And five shows will be recognized for daring to share the stories of the unheard or under-heard. Plus, this year we will be announcing a brand new Barrymore Award that will debut in 2016 that the community doesn’t even know about yet! Plus we have a wonderful group of presenters for the ceremony, which will feature some live performances never before seen and some from nominated outstanding overall productions!

Phindie: What roles do you think the Barrymores and the ceremony play in the Philadelphia theater community?

Steve Pacek: I think the Barrymores serve the purpose of inspiring artists within the community to strive for greatness and excellence in their work. And the wonderful thing that I believe is that people in the Philadelphia theater community are especially good at is supporting each other. It is the thing that artists who come here from other places note. We don’t strive to cut each other down. Instead, it seems we instinctively choose to help lift each other up. A high tide lifts all boats. The Barrymores strive to lift the art up…and, as a result, the whole community elevates. There is also no other regional theater community in the nation that has the type of special awards we do. Tens of thousands of dollars in cash awards go to artists in the community each year from dedicated and loyal supporters of the arts in the form of the F. Otto Haas Award for an Emerging Philadelphia Theatre Artist, the Virginia Brown Martin Philadelphia Award and the June & Steve Wolfson Award for an Evolving Theatre Company. These awards make a difference and change the lives of artists and arts organizations.

Phindie: Do you see signs that the awards have prestige and traction with the theatergoing public?

Steve Pacek: We live in a society that seems (at times) obsessed with other people’s opinions. How many stars is that restaurant? What is that Uber driver’s rating? What did the critics say about that movie/show/concert? People want to know what other people think. Doubtlessly, if something is “Barrymore Recommended,” it peeks interest…and if it wins an award, all the more! I can’t speak for everyone, but as a co-founder of a theater company, I can tell you that after we were nominated (and won) our first Barrymore Award for Outstanding Ensemble in a Musical, our visibility certainly changed and it felt like we were finally put on the map! So yes, I saw the sign and it opened up my eyes…

Phindie: The nominating process was revamped when the awards returned after a one-year hiatus. How has this improved the process?

Steve Pacek: When Theatre Philadelphia formed to save the Barrymore Awards from dissolving with the Theatre Alliance, we wanted to salvage the parts of the system that worked and look for a way forward for those things that could use improvement. Town hall meetings were held, other adjudication systems were researched and feedback was sought from the community. The system that is now in place is the culmination of all these efforts. It involves nominators whose majority decision determines if a show becomes Barrymore Recommended. If it does, it then moves on to adjudication by a panel of judges who see all Barrymore Recommended shows and then meet quarterly to discuss anything up for nomination. There is also a Barrymore oversight committee composed of a cross-section of the community in place to rule on special considerations and to reevaluate the system for improvements. Feedback is always welcome, as are members of the community to serve as nominators, judges, and committee members.

Phindie: What can we look forward to in the future from Theatre Philadelphia?

Steve Pacek: Theater Philadelphia is already looking forward to the 2016 Barrymore Awards…there have already been 15 Barrymore Recommended productions so far this season! We are expanding the ways we help the Philadelphia metropolitan area discover what is happening on area stages. We are redesigning our website (theatrephiladelphia.org) to be even more informative and interactive. We are looking for new ways to share knowledge and resources within the community. And we are continually striving to promote excellence in theatre. And don’t forget about the new award that will be announced at this year’s ceremony on Monday, November  at the Merriam Theater!!!
Phindie: Thanks Steve!