Ken Ludwig cannot keep away from tenors. While his new farce, A COMEDY OF TENORS, does not refer to his lasting favorite, “Lend Me a Tenor,” Ludwig brings four of the outstanding characters from that show — Tito Merelli, Maria Merelli, Max, and Saunders — from Cleveland to Paris for more rollicking escapades that chronicle the mayhem that occurs in the last hours before Saunders is about to produce an opera spectacular the entire world is anticipating.

Two tenors is not enough for A COMEDY OF TENORS: Ludwig gives us five, one a Swede we never see, another a bellhop named Beppo who bears a striking resemblance to Merelli and may have to pass for him during the grand concert, and the last the young American with the Italian parents and Italian name, Carlo Nucci, who is challenging Merelli’s place as the prime tenor in the operatic world and, coincidentally, is having a torrid affair with his daughter.

Besides doors to slam, there are balconies in the French hotel where TENORS is set. Gymnastic Rob McClure, playing Max, and Kristin Martin, as Merelli’s daughter, Mimi, do some entertainer gainers in attempts to escape being seen, stabbed, choked, you name it. Bradley Dean, in addition to having the credible voice necessary to play Merelli, doubles superbly as Beppo, as free-spirited and lighthearted as Tito is temperamental and jealous. Dean has a genuine field day going from the poised, polished, phlegmatic Tito to the anything-goes Beppo, who is particularly delighted when mistaken identity gives him the chance to have sex with two willing woman in two separate hotel rooms at the same time. This being a farce, he mates with the one that won’t raise a fuss when she learns the truth, but the scene and the set-up is hilarious. 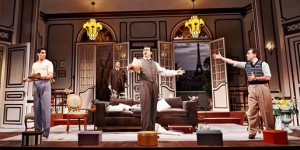 Everything is Ludwig’s play is hilarious. The playwright is a master of linking plots, having one character finish another character’s sentence in a way that is a hoot, creating false impressions that confuse characters and create suspense, giving the temperamental a chance to slap their frustrations away, using language barrier and hesitation as someone summons the words different from the smutty one we anticipated, and providing a musical good time, as happens when Dean, McClure, and Bobby Conte Thornton — talk about adorable — launch into a three-part version of Alberto’s (and Violetta’s) “Libiamo ne’lieti calici” with enough brio and excitement to elicits bravis from a packed opera house.

Ludwig is top form. The cast, including a soprano, Lisa Brescia as the fiery Tatiana Rancón, is on fire on spit-spot timing, funny pratfalls, fabulous double takes, and superb singing. All is kept is order by one of my candidates for the world’s best director, Stephen Wadsworth, who stages this farce with the same care and creativity you see in his classical pieces and operas. Wadsworth knows when to quiet the riotous for a bit of pathos and when to go full tilt on the riot. Never does a door open without some delight occurring because of it. Mayhem, as it ensues, stays clear and enjoyable because Wadsworth and his cast don’t allow to miss any joke, verbal, physical, or facial.

Ludwig knows his tried-and-true and isn’t afraid to draw on the structure of “Lend Me a Tenor” for his new opus. Once again Saunders, now a former mayor of Cleveland in addition to being an opera impresario, has to produce a major concert featuring the greatest name in opera, Tito Merelli. Once again, Merelli is late. He still likes to eat and drink too much and eats, as Maria says, like-a a pig.” Building on the way Merelli will predictably react, he arrives in Paris not knowing he’s going to appear with the man destined to take his place as the opera fan’s favorite, Carlo Nucci. Even Saunders doesn’t know that when the play begins. Merelli is also unaware his daughter, Mimi is having an affair with Carlo. Marital squabbles, misunderstandings, and rapprochements abound. Max, who begins “Lend Me a Tenor” a put-upon factotum and ends up an opera star, holds both roles in  A COMEDY OF TENORS. He is still Saunders’s go-to person while holding a career as a tenor. You don’t have to be at all familiar with “Lend Me a Tenor” to appreciate Ludwig’s new play, but having seen it gives A COMEDY OF TENORS extra texture and more jokes for you to savor.

New characters in COMEDY OF TENORS are inspired. Beppo arrives in time to give novelty to Ludwig’s second act, as well as to give Dean a great role and the audience a characters they can’t wait to see often. You hear about Carlo Nucci before you see him, but once you see him, Thornton in tighty whities making love to Mimi on a suddenly unveiled sofa, you hope he, too, will make frequent visits to the stage. Even dressed. Brescia’s entrance as Tatiana is another breath of fresh air, not only because it means more plot complications, but because Brescia adds a Russian accent to the collection of Sid Caesar-esque dialects heard the McCarter stage. Her pronunciation of some words is a belly laugh on its own.

Antoinette LaVecchia’s Maria is an absolute gem. LaVecchia not only mines comic gold with her on-the-mark delivery of Maria’s punch lines but, temperamental though she is, she serves as the reasonable link between plots involving Tito and Carlo. In some ways, she is the theatrical key to the first act, and LaVecchia fulfills that responsibility with aplomb.

Rob McClure showed Philadelphians his mettle early on in “The Bom-bitty of Errors,” and “Austentatious” for 11th Hour. He must like appearing in shows that parody Shakespeare’s title because all of talents as a singer, as a contortionist, and as a comic are used to their utmost in “Comedy of Tenors,” as they were in “Bom-bitty of Errors.”

Bobby Conte Thornton, with the lock of thick dark hair falling over his left eye, is more than just a looker. He matches McClure and Dean in comic timing and quick takes as much as complements them when they take stage as The Three Tenors. Kristen Martin is wonderful as Mimi and adds to the comedy when she arrives at the hotel in the French peasant dress she will wear as a costume while appearing opposite Norma Shearer in “Marie Antoinette,” a role Mimi auditions for after making playful love to Carlo. Ron Orbach doesn’t have the vocal purity of his co-stars — He sounds as if he’s in a different show. — but he is a cantankerous, pragmatic Saunders who keeps the comedy hopping.

Stephen Wadsworth always finds way to infuse the most basic comedy with heart. He plies that magic once again with “A Comedy of Tenors.” The timing that is his hallmark comes through in this production, as does his uncanny knack for foreshadowing every joke so the laugh is bigger when the punch line comes.

Ludwig gets wonderful mileage from his punch lines. I don’t think I’ll ever hear the words, “Would you like some tongue” in the same way again, just as I have made a habit of saying, “It’s not you, Max” when someone doesn’t fit in a given situation and quoting, “In my town they have a saying gas never killed anyone, and believe me, in my town, they’d know.”

Charlie Corcoran’s Paris hotel set is good enough to move into. Its stage left window includes a view of the Eiffel Tower, I’d say from the perspective of The Trocadéro. The furniture is exquisitely chosen, and you have Beppo to bring you what you need from the lobby. William Ivey Long designs as gorgeous gown for Tatiana, a wonderful tight-fitting shirt for Carlo, and formal wear that’s worth its name and looks pricey. Shad Ramsey made various fights into larks, although you wonder how Carlo can sing when Mimi gets done slapping him after she misinterprets one situation and has another she needs to reveal to him. Music is essential to Ludwig’s play and Joshua Horvath’s sound design incorporates all well.