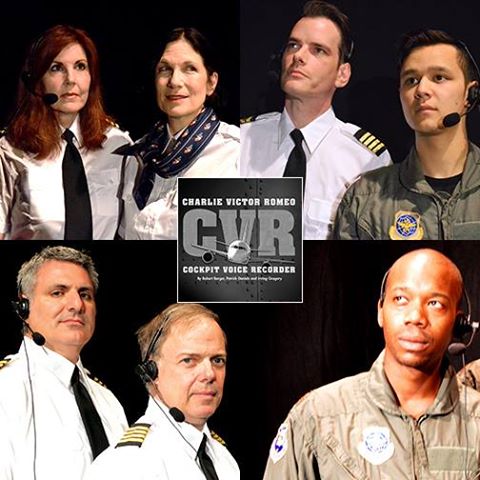 You are advised, before the show takes off, to secure your seat belt. DO it. What you will witness, for 75 minutes with no intermission, was gleaned from actual National Transportation Safety Board transcripts of black box recorders from six deadly aviation emergency situations. Written by Robert Berger, Patrick Daniels, and Irving Gregor, CHARLIE VICTOR ROMEO, which is phonetic alphabet for “cockpit voice recorder”, transports the audience into the chilling zone occupied by pilots and co-pilots during imminent flight disaster, where they are responsible for the safety of “all the souls aboard”.  Staged in a cockpit setting, seven adept actors, (Eric Carter, Kevin Doyle, Jason Cutts, Stacy Skinner, Tyler S. Elliott, Cindy Starcher, and Paul Sollimo) directed by Joseph M. Paprzycki, play various roles as they reenact the critical, emotionally charged moments of each flight’s zero hour with stark realism.

Before each of the six vignettes, basic information such as airline, flight number, number of passengers, destination, is revealed in black and white on a screen situated above the stage, and shown afterwards are any aftermath statistics. Flight personnel are nearly nameless, identified by the flight they are crewing, but in each instance, every one of them utilized all of their expertise against grim odds, to land the plane, never abandoning the pursuit of survival. This same sense of professionalism is instilled in the South Camden Theatre’s production. Paprzycki’s direction shines throughout, and each performer becomes that highly trained person behind the wheel of the plane.  The actors need to articulate in complex, codified airline lingo while lunging at controls, steering the plane, talking on the “squawker” and furiously trying to communicate and coordinate withal during extreme crisis; and they succeed.  The sound (James Guckin), lighting (Andrew Cowles) and uniforms contribute to bringing the atmosphere of the cockpit into the audience, augmenting the overall verisimilitude of the scenes.

This is unusual theater; it is reality infused drama taken from life and death events.  Though the content may cause discomfiture, it is extremely well presented, very informative and may even bring about increased regard for those who navigate the sometimes unfriendly skies.