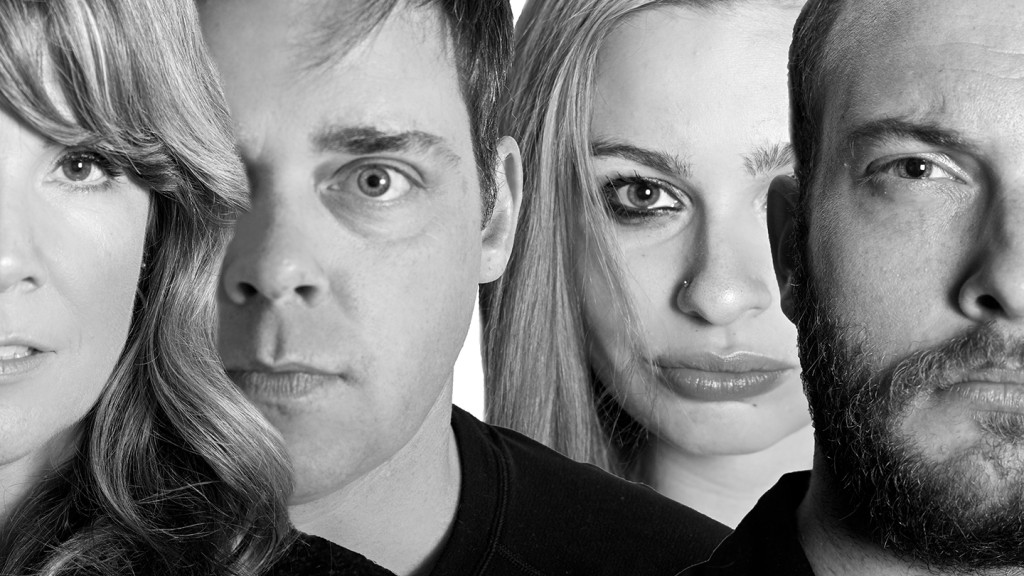 Patrick Marber is a master of words. His smart, witty, and adult CLOSER tells a tough and romantic story about four people whose lives and affections intersect in intimate and alienating ways. It includes torrid encounters, coolly deft flirtations, thoughtful conversations, candid confessions, and almost pathological deception. Characters are forced to be honest even though they live by a code that includes infidelity, betrayal, rationalization, and spite. One character, a writer, begins a scene by saying, “This will hurt,” a telling opening that denotes a lot of what happens in Marber’s thorny, yet romantic, roundelay in which two men serially change places in the lives of two women, and it’s difficult to tell true love from the fancy of a moment.

Steam and moral confusion drive the better productions of CLOSER: the more a staging can depict adults in actual romantic turmoil, the deeper and more impressively the writing will play. Words, well composed as they are, are not enough. Yet, words become the crux of Ed Corsi’s production for Hammonton’s Eagle Theatre. By emphasizing the dialogue, Corsi provides a chance for his audience to parse Marber’s play and hear the verbal brilliance and emotional possibilities in the text. But his CLOSER is less enacted than recited while the characters move about in costume and hint at the layers simmering beneath Marber’s provocative language.

At some point, each man in CLOSER is genuinely in love with one of the women. This love comes in turns. Alice (Samantha Morrone), the waif who makes her living stripping in a swanker London gentleman’s bar, has actual affection for Dan (Jeffrey Coon), the obit writer who would love to be a novelist. She also has true feelings for Larry (Tim Rinehart), a dermatologist. Dan and Larry return her ardor. Anna (Lauren Kerstetter), the most maturely aloof and most complex of Marber’s characters, relishes her affair with Dan, initiated by him as he continued to live with Alice, but finds as much, if not more satisfaction, with Larry, whom she marries, leaves, and lives with again. But Marber isn’t writing about sexual freedom or musical beds as much as he’s examining the changeable nature of love and relationships and how we become fools, villains, dishcloths, and cavaliers as we negotiate liaisons, linkages, and, yes, love.

Given all the possible permutations, you’d think one pair of performers would convey some form of chemistry or some expression to show his or her passion, hurt, disgust, or ardor. Anger comes stage center at times, but even that is muted. Morrone has promising moments in which she lets you see the unreconstituted rebel in Alice, and Rinehart physicalizes Larry in way that allows you to believe his character actually walks the Earth and is showing you a slice of his life, but Corsi has allowed, or instructed, his cast to remain inert and go about business as if their emotions and romantic machinations were just a humdrum part of a humdrum existence. The CLOSER cast behaves towards each other as if they are actors at their first rehearsal off-book. Everything is dialogue, with no bonding or emotion. There’s no fire, and the play is all about fire.

Productions that emphasize language let you see a play more clearly that more theatrically dramatized stagings. It was a pleasure of sorts to hear Marber’s words so clearly; I stayed with Corsi’s CLOSER throughout, but the experience was totally intellectual. The fearlessness, openness, and expressiveness I hoped for never emerged.