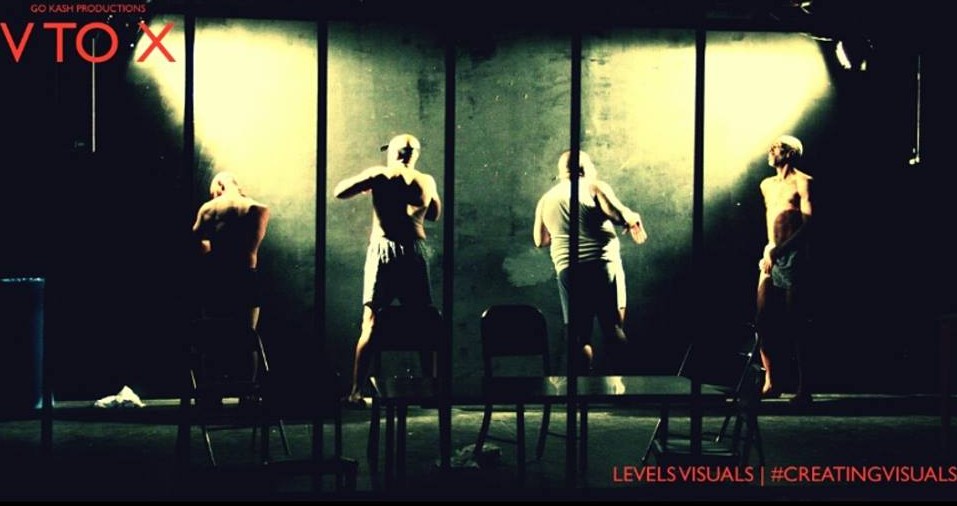 The figures are astounding: Prisons and jails in the United States now hold over 2 million people, quadruple the number in 1980. The United States incarcerates a greater proportion (0.93%) of its population than Stalin’s Soviet Union at the height of the Gulag Archipelago. Some 40% of those imprisoned are African American, who make up just 13.6% of the population. For every 100 black women age 25-54 in America, there are just 83 black men: a missing population of 1.5 million. With this terrifying backdrop, GoKash Productions’ world premiere play V TO X  (read “five to ten”) takes a deeply affecting look at the social carnage caused by mass imprisonment.

It’s easy to imagine a politically minded play on this topic being “Important” and “Meaningful”, and not actually any good. But writer/director Kash Goins realizes the reason we care about a political topic is because of the way it touches real people. His characters are fully formed, not ciphers for a didactic plot.

V TO X opens with a group of inmates at a private correctional facility (“profits up 500%!”) celebrating New Year 2013 (“the year that black lives in America started to matter,” someone jokes). Some of them claim they are innocent, but most of them are morally complicated—guilty of terrible crimes, but previously victims of terrible crimes. Among the group are M.P. (Omar Long), a reformed rapist who’s coming up for parole; newbie “Young Fish” (Jason Stewart) who struggles to come to terms with his lot (“this is jail, there’s no orientation”); and “Strawberry” (Tiffany Barrett), a pre-op transgendered male. She’s in a relationship (“this isn’t a love thing”) with “Wolf” (Damien Wallace), the elder leader of the group.

Wolf is facing “all day and a night”—a life sentence—away from his wife Denida (Nancy Marie) and the son he’s never met, Marcus  (Marc Jean). How can Wolf stop his son following in his footsteps when Denida has told Marcus that his father is dead? Wolf’s incarceration is destroying new generations.

In set designer Britt Plunkett’s layout, the action of V TO X happens all around us: prison beds join the audience on the risers. Prison guards hang along the edges, watching every move, doling out the occasional capricious punishment or corrupt aid.

One edge of the stage becomes solitary confinement, where “Bitch Baby” (Jaron C. Battle) wails in seclusion, stuck there with only regular beatings as company. Although he is not yet charged with any crime, he is losing his life and his sanity because he has no one to pay his meager bail and he refused to plead guilty to a crime he did not commit.

Goins does not have to add commentary to his portrayal of prison life and those it affects. He trusts his impressive actors (most of whom are unfamiliar to this regular local theatergoer—but should not be) to build their characters slowly, in expression and through natural dialog. They are given backstories and motivations, but the characters are not reduced to their backstories. They feel real, and we care about them. So their fates—which statistics tell us stand for the fates of hundreds of thousands—powerfully affect us.

Bars separate the audience from the central stage: the common room, the visiting room, the outside world. “The world outside these walls don’t know I’m here,” Wolf says to us through the bars. “Or, they know, they just don’t give a shit.” Watching V TO X, we do.
[Skybox at the Adrienne, 2030 Sansom Street]  October 2-25, 2015; gokashproductions.com.