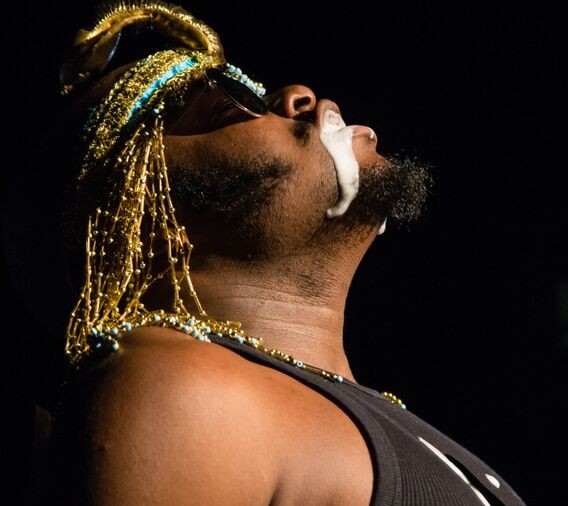 Created and performed by Jaamil Olawale Kosoko, BLACK MALE REVISITED: SONGS FOR THE DARK DIVINE delved deep into the many facets of the black man’s psyche while examining the intersectionality of race, gender, and sexuality. The dark space at the headquarters of Fringe Arts hosted a kaleidoscope of blackness. Sad blackness. Angry blackness. Rescued blackness. Incarcerated blackness. Lost blackness. Dead blackness.

Books by James Baldwin, Brenda Dixon Gottschild, Toni Morrison, among others, strewn through the space offering some semblance of intellectual endorsement and validation. Photographs of black men lay in disarray on the floor while the gloomy visual of an obituary—Abdul Jaamal Muhammad’s—sliced through me. The sadness I felt was followed by hopelessness, anger, and disappointment. Radically unpredictable and critically significant, BLACK MALE REVISITED swept away pretenses and political correctness to reveal the complexities of identity and the emotional chaos that present itself when telling these hidden stories of the self. Even with a surplus of references, props, tangential interruptions, multi-media inclusions, and chaotic outbursts, BLACK MALE REVISITED was salient, poignant and authentic. Read the full review >>> [FringeArts, 140 N. Columbus Boulevard] September 14, 2015; fringearts.com/jaamil-kosoko-presents-black-male-revisited-songs-for-the-dark-divine.