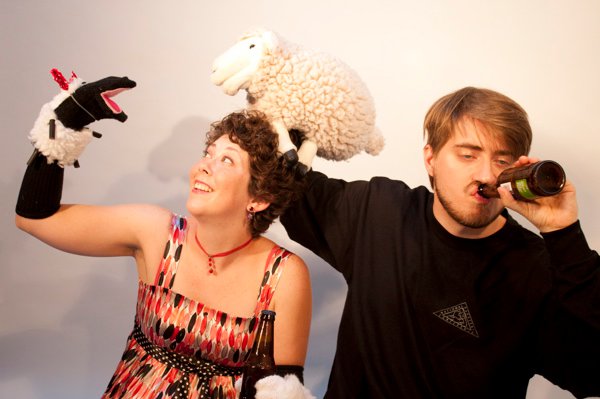 PUPPETDELPHIA FRINGE SLAM presented a handful of short puppetry works, but that description fails to capture the joyous mayhem of the event. Introduced by a washed-up, drunken Pinnochio, the acts included “Secret Life of Worms” (“why don’t we wiggle out of here”), “Miss No No” (“America’s favorite sex ed teacher”), and a performance of singing sheep. In a highlight, Katie Corell gave a foot-centric interpretation of sexual fan fiction written about her when she was a contestant on the TBS reality show King of the Nerds.

Philadelphia puppetmaster Aaron Cromie was a featured performer, but the only strings he manipulated were those on his acoustic instruments; his folk duo, Chickabiddy, provided musical interludes. A few acts proved decidedly difficult to follow, most especially Gwendolyn Rooker’s outrageous “Jolly the Sperm Eating Horse”, complete with sing-alongs and the exchange of body fluids. Yep. [Plays & Players, 1714 Delancey Place] September 11, 2015; fringearts.com/puppetdelphia-fringe-slam.