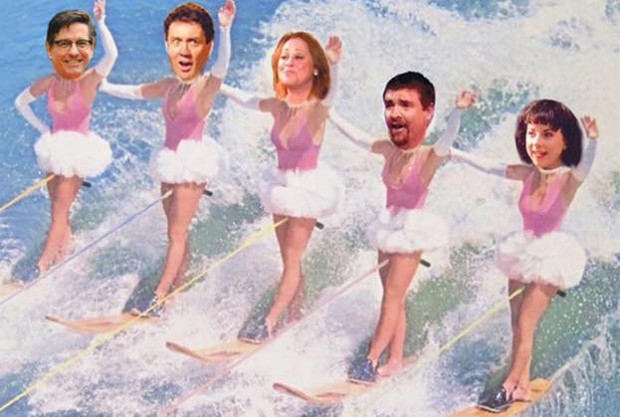 Popular comedy troupe The Waitstaff returns to the Fringe with a new series of short skits on everything from the current political candidates to feminism and gay marriage, including send-ups of such ubiquitous people in the news as Donald Trump, Hillary Clinton, Caitlin Jenner, and the Pope. Though the one-hour cabaret show is called THE WAITSTAFF’S VACATION, only a few of the sketches actually relate to the title. But as the audience is told from the outset: “It doesn’t have to make sense, it’s a Fringe show!”

Among the funniest routines are the ones that do adhere to the titular theme, with three of the comics crammed into a car for their interminable weekend trek to the beach (that is, “downna shore”), and Gerre Garrett and Sara Carano as two friends enjoying a chat in Wildwood, with spot-on South Philly costumes, accents, and attitude. There’s scatalogical humor, socio-political incorrectness, and Fringe interviews and updates by a pretentious and clueless reporter (Carano)—something to amuse, and to offend, everyone! [L’Etage Cabaret, 624 S. 6th St.] September 4-19, 2015; fringearts.com/the-waitstaffs-vacation.