A few years ago I was at that good used bookstore on 20th Street by the Free Library and saw a crowd gathering on the Parkway: Bruce Springsteen was about to play a short concert to promote Obama’s first run for president. His seven-song acoustic set was excellent, just him and an acoustic guitar and songs of struggle and hope, but what sticks with me is his mid-set speech, which began with a cogent artistic statement: “I’ve spent most of my creative life measuring the distance between [the] American promise and American reality.” (read the speech in full) 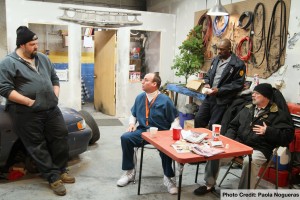 Bruce Graham’s NORTH OF THE BOULEVARD, now getting its world premiere at Theatre Exile’s intimate South Philadelphia space, measures that same distance. Graham has created a funny, touching work: a working class drama as eloquently observed as a Springsteen lyric.

Trip (Scott Greer) is struggling to make ends meet with his auto shop in a deteriorating neighborhood of Northeast Philadelphia. The garage is the hangout for buddies from Trip’s high school days: Bear (Lindsay Smiling), a security guard; and Larry (Brian McCann), an aid for dying elderly at a run-down nursing home. Their lives are straight out of a song on Darkness on the Edge of Town: they work hard in dead-end jobs just to fall further behind.

The well-meaning trio are joined by Zee (Bill Rahill), Larry’s foul-mouthed, ill-tempered father, who has been banned from every other place in the area. All lament the decline of the neighborhood and the corruption in borough government. Larry thinks he could change things with an ill-advised run for borough mayor. His friends try to tell him he’s not cut out for it. “Mostly it’s just common sense,” he responds, “and don’t steal.”

Bear hopes to hit the jackpot with the box of McDonald’s monopoly cups he bought from a local bum. They all long to leave this “Baltic Avenue” world for somewhere better. Not “Park Place”—just someplace north of the boulevard, where the houses are small but nice and the schools are good. But it seems “nobody ever leaves here, they just die and foreigners move in.”

Director Matt Pfeiffer has brought out four commanding performances from his cast: Greer communicates Trip’s nobility as he tries to do his best in a world that has “a million ways to fuck you”; McCann captures Larry’s pitiful inadequacy as a down-trodden father longing for respect. And the mechanics shop was so excellently evoked by Matt Saunders set design that it took me a second to realize it was a set.

After painting a brilliant and richly humorous portrait of the characters’ predicament in the first act, Graham gives them a crazy, illegal option to escape in the second. By then, the characters and their dynamics are so well-formed that we are easily carried along with their debates on whether or not to seize this chance.

“I don’t want this to come back and haunt you,” says Trip.

“It will haunt me if I don’t do it,” replies Larry.

Extras
Listen to an interview with NORTH OF THE BOULEVARD’s Brian McCann.

Deb Miller gives her thoughts on the play on Facebook.

Bruce Walsh gives some background on the play for the Metro.

Listen to the playlist of the songs Springsteen played on the Parkway.

2 Replies to “NORTH OF THE BOULEVARD (Theatre Exile): If the Boss wrote plays he’d write this one”