Michael Brown. Freddie Gray. Sandra Bland. Black Lives Matter: In the last year or so, America has embarked on a complicated discussion on race and policing. How can art contribute to this conversation? In her Fringe show UNARMED—based on a photo installation she created at Headlong Performance Institute—Arielle Pina responds through dance. She presents her body as an American, woman, patriotic, black body, and uses it to explore stereotypes and power relations. Arielle talks to Phindie about UNARMED and the issues it explores. [Shiloh Baptist Church, 2031 Montrose Street] September 11-13, 2015; fringearts.com/unarmed. 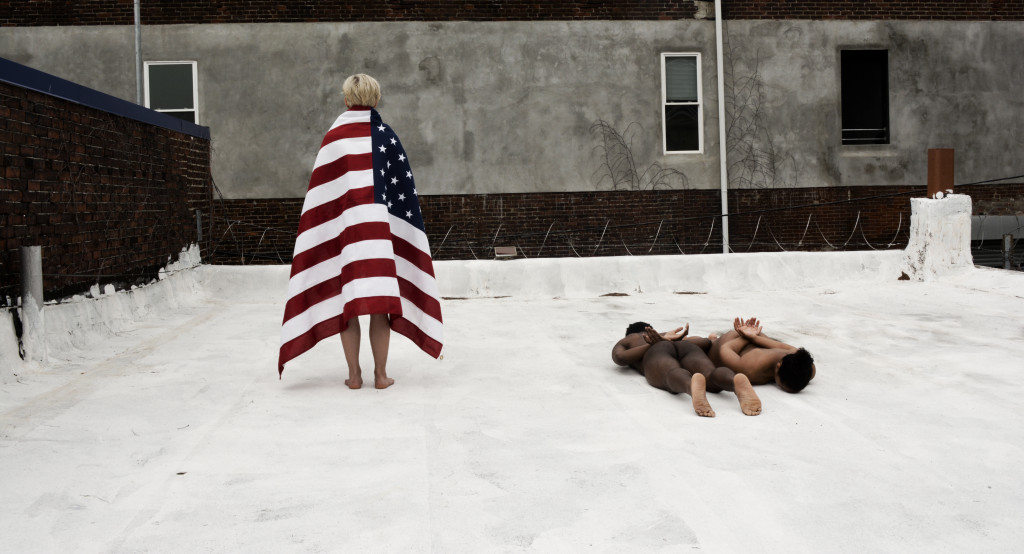 Phindie: So UNARMED started as a photograph series?

Arielle Pina: Yes, initially I wanted to create some solidarity around the incident in Ferguson, Missouri. I had a camera and an idea and this is was the result. I presented the series at the Headlong Performance Institute final show as a live installation in which the audience responded to the work in darkness.

Phindie: What was the process like adapting it into a dance piece?

AP: It was definitely a split decision process. After the Freddie Gray incident, it felt essential to revitalize UNARMED in some way. I was so over hearing about more of my people getting killed, that I wanted to respond in a way that I know how. The Fringe deadline was around the corner and I decided to label the new work as a dance piece. I didn’t quite know what would come next but I asked people to work with me, and we got in the studio to figure it out.

Phindie: What remains from the original installation?

AP: Some of the performers that are in this show were photographed in the series. Also, the purpose of the work is to keep the community engaged in productive conversation. I think both versions of UNARMED accomplish this feat.

Phindie: Why do the themes in UNARMED resonate with you?

AP: Themes of race, difference, and identity have always been a part of my work because these are things that I deal with daily as an American Black Woman. More than ever, my life depends on making work with these themes in mind, and it’s necessary for me to get more people involved in this dialogue. This conversation will be uncomfortable and difficult, but I’d say to the audience: please have it anyway.

Phindie: Would you rather lose both your arms or have to kill Darren Wilson [the police officer who shot unarmed civilian Michael Brown] yourself?

AP: I would rather talk about the fear I have answering this question. If I pick option one I sacrifice my quality of life for a person who is a prime example of how to trivialize black life—I would be disgracing the Black community by not pursuing vengeance. If I pick option two I would be considered militant, angry, and reckless. White America expects me to be destructive. At the same time this is unacceptable to Black America because I would be affirming a stereotype of black violence. It’s not that I don’t know which I would rather do, but there is no way to answer this question correctly.

Phindie: Do you think America will ever be a “post-racial” society?

AP: I’m not sure. When I think of the America that my grandmother lived through and the America that my parents grew up in, I can see that nation has progressed. But then I think about how the country’s economy was fueled by slavery, segregation, and inequality, and it is the American way to have a winner. I don’t know that all racial communities will celebrated simultaneously one day, because it goes against the historical make up of this nation. “Post-racial” reminds me of the concept of utopia; it sounds good but is not realistic to our actual circumstance.

Phindie: How did your time at attended Headlong Performance Institute affect your art-making and life as an artist?

AP: HPI was life changing. It was the first time I got to be all parts of myself at the same time. I got to dance, act, make music, and take photos all in the same day if I felt like it. After attending I realized that the things I want artistically are within my reach if I go for it. I also realized that I have a community behind me through my artistic journey.

Phindie: Tell me a little about your collaborators, how did they come to the project?

AP: My collaborators are my friends. I basically asked them if they would be a part of a piece, and I told them that I didn’t know exactly what it was going to be. Will [Colella] and Alexa [Byrd] are both musicians whom I met at University of the Arts. Max [VanHook] is a designer and he’s also a friend I met at UArts. I met Rebecca [Fedele] and Evelyn [Langley] at HPI. Michael [Pusey] and I were both in the School of Dance at UArts. They were all my first and only choice for this project and I am so grateful that they all said yes!

Phindie: What has surprised you about working with them on the piece?

AP: Their willingness to try whatever I ask even when I have bad ideas. My collaborators let me get those out so we can get to the better ones. They are patient with me and trust my vision, which feels empowering.

Phindie: Do you have any other recommendations for this year’s Fringe?