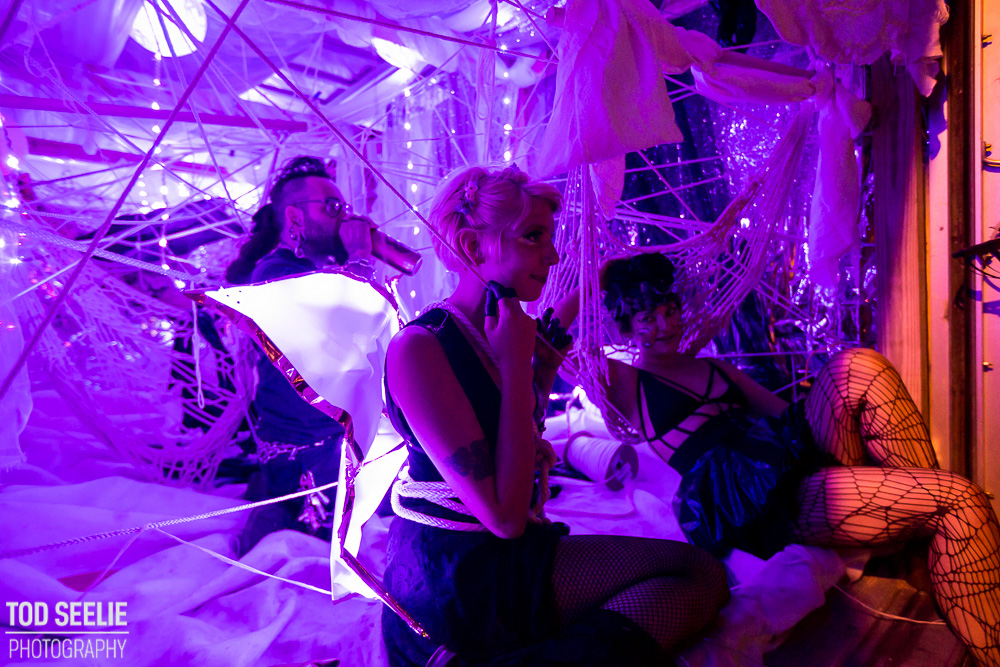 On Tuesday I got an email from a certain Kensington art collective. “Well, aren’t you lucky!” the email shouted at me.

It was an invitation to the EverNever Night Market, a sort of interactive pop-up art carnival happening August 1st. The secret location of the night market was yet undisclosed, but I was given a lead on how to sign up for an announcement the night before.

The Night Market market plays coy. It’s one of the few events that wants you to find it but doesn’t want to tell you where it is. Secrecy is huge with these people, and yes, it has something to do with exclusivity, but it’s more about the magic.

In an extremely unlikely public location, with all the urgency of a desert rose, the EverNever Night Market will bloom this Saturday night at 8:30 pm when fifteen unprepossessing moving trucks open their doors to reveal unique interactive, performative art exhibitions.

EverNever has happened twice before in Philly, both times at Little Berlin. Among the fifteenish shows on the docket, there’s a smash truck, where you wrap yourself in protective gear, grab a massive hammer or baseball bat, and take out all of that office rage on some vases and computer equipment. There’s also “Arachnia Patisserie,” a “sticky tangle of webs, hammocks and ropes” where you get trapped and fed by sexy spider ladies, and a “racy puppet show.”

So why the hell won’t they just tell us where it is?

“There are so few secrets left in life,” declares Mark Krawczuk, founder of Lost Horizons Night Market, the model being followed by EverNever. Eight years ago Krawczuk launched his first Night Market, then made the model open source so anyone could replicate it—and they have, all over the country. “If you want to know the phone number of anybody in the world you could go onto Google and probably find it. I wanted to make something where you can’t put it into a search bar and get it.”

Kathryn Sclavi is running the Philadelphia EverNever Market, based on Krawczuk’s Lost Horizon model. “One of Mark’s guidelines,” she points out, “was, don’t let anyone know the address until right before.

This Fight Clubbish secrecy, she points out, “keeps this element of mystery and surprise. And you have this feeling of anticipation because you don’t know where it’s going to be, and it’s like a secret, it’s special. You have to work to get to the party.”

There is a reaction in art against the increasingly passive nature of consumers’ (our) relationship to the world around us. Television and the internet, which now seem more solid columns of our civilization than democracy and sliced bread, have us “watching” so much of the time that it’s no longer special. We want to interact, to step into another dimension of participation.

Part of that is a call to older models. No joke, everyone I’ve talked to who’s involved in the Night Market—Krawczuk, Sclavi, and Jonah Levy—brings up the word “carnivále.”

Jonah Levy is co-directing EveryHere Logistics. EHL recently ran a successful Kickstarter campaign to tour ten art trucks cross country, six starting in Philly and ending in LA and four going in the other direction. The network they depend on, of course, is a series of carefully scheduled Night Markets, where they’ll perform alongside local acts.

This is all part of Krawczuk’s vision to connect artists, cities, and resources through performance.

Levy is also running EveryHere Logistics Travel Agency, one of the six trucks in his fleet. It’s a performative travel agency, or as I like to describe it, a fleshified Google search. Audience members trade hot travel tips for a chance to win an all-expense-paid trip to a nearby city. The trick is offering up the hottest tip, which usually includes, as Jonah puts it, contact information for an actual human being, who can enhance the trip through actual human interaction. At June’s New York night market, he gave away a trip to Philly with goodies like free memberships to the Barnes, meals and lodging. At Philly’s Night Market he’s giving away a trip to New York.

The idea for his travel agency developed out of an idea to do a simple, site-specific performance of David Mamet’s Glengarry Glen Ross in a moving truck, an idea which was shot down by Krawczuk as neither interactive nor particularly “fun.” “I like Glengarry Glen Ross,” says Jonah, “because it’s about the con, about the sale, about the true American force of making a good sell and feeling good about it. It’s something that I’ve done as a tour guide for ten years, and it’s something I want to do with people across the country.”

Jonah’s dream is coming true. While his fleet of six trucks travels across the country, he’ll be playing the very American role of the overworked but unstoppable traveling salesman, wheeling against deadlines to hook up deals as he goes, talking up business owners in Chicago so that he can auction off their goods in St. Louis.

His fleet starts its journey on Saturday right here in Philly, but will soon be barreling across the country like wacky racers, always heading for the next night market in the next city. By threading together these markets, Krawczuk points out, “we are hoping to create a connection for people across the country with other creative communities. This way, we can start a cultural pump that sends creative folks across the country.”

When you show up on Saturday night to the secret location, and you climb into a spider’s sticky web or get your fortune told by a vagina-shaped puppet, you’re actually engaging in a web stretching across the country, linking up hundreds of artists all trying something risky and new, and all interested in learning from one-another’s innovation.

Oh, right. You want to know how to get there. One option is to ask around with your most in-the-know friends. But you could also take a tip from an old pro and email evernever.nightmarket@gmail.com for an invitation. [Unannounced location.] Saturday, August 1, 2015, 8 pm – midnight.