“It’s almost like this isn’t really a ‘show,’ more some kind of process. I was thinking of the experiences I’ve had coming into theater during rehearsals, sitting there watching people talking to each other and moving around both stage and auditorium, and fantasizing all that randomness and loose reality could in fact be ‘the show’ being rehearsed.” 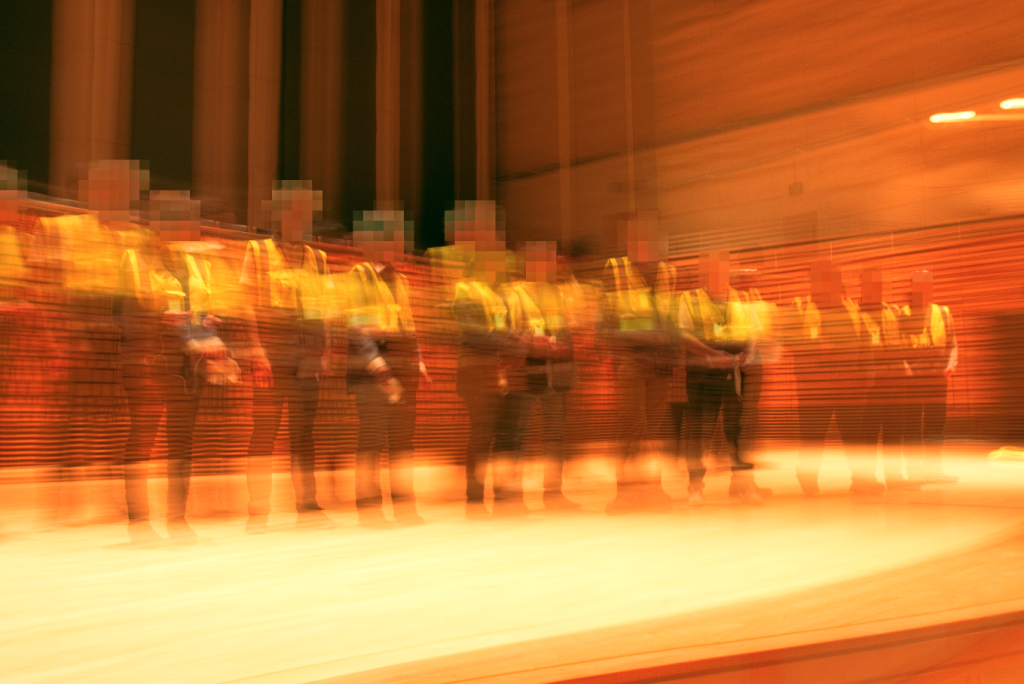 For two nights this September, Swiss-born and UK-based creator and director Ant Hampton will plant audiences into a nearly empty, and barely lighted, Merriam Theater. Returning to the Fringe Festival (previous shows: The Quiet Volume and Etiquette), Hampton polishes off old tools—headphones, audience involvement, and surrealism—with some technologically complicated recordings and computerized systems for The Extra People, his latest “Auteatro” creation, a type of performance in which the audience member is both the observer and the performer, experiencing the work from the inside. These shows, a term which Hampton himself puts under dubious glare, blend and elide performance, experience, creator, and observer.

FringeArts: How did you come up with the title The Extra People?

Ant Hampton: It comes via Wings of Desire—Peter Falk looking at extras on a film set and thinking to himself. He thinks of ‘extra humans’. It’s a moment which manages to be both tender and disturbing. The Extra People is also inspired by the work of Aernout Mik, who often uses large amounts of ‘extras’ in his video installations:

I am intrigued by the figure of the extra because the extra has a certain dignity. That suits me because they are happy to be on screen and that’s enough for them. They have a certain modesty about them that they don’t want to put themselves so much in the foreground. They don’t disturb the group too much by having too much presence, and yet they still relate to objects in space. They have presence but not too much. (Aernout Mik, The Museum of Modern Art, New York City, NY, 2009.)

I was really interested to relate all this stuff about “extras” to two things: firstly, contemporary / globalized labor conditions and secondly, the experience of dementia. Both of these involve a kind of crushing disorientation where you feel the larger context is too complicated or big to understand, or that it’s simply “not your job to know.”

FringeArts: When you are in an empty theater, what do you think of?

Hampton: I think of theaters as very transparently pscyhological spaces—buildings which spring into existence as a direct result of how our minds work. When a theater is full, its audience and function take over and we may not think so much about what a strange invention it is. But when I walk into an empty theater it’s like I can really feel the collective drive of so many humans over so much time, all that desire to watch and be watched, and how it has somehow consolidated itself into so many seats and so much stage space.

FringeArts: How did you make the connection between “The Extra People” and the empty theater?

Ant Hampton: I’ve been researching warehouse management systems: in the last four to five years things have changed a lot, and now instead of using paper and barcode scans, workers are mostly directed by a computer which speaks to them in tetchy, terse code. Following on from the above, and as theaters are so linked up with dreams, I thought of situating this kind of temporary, high-viz workforce of “Extra People” within a theater, to create a kind of cracked-dream version of what is already a pretty weird and at times worrying reality. The piece, and your role within it, oscillates between this kind of fast and bright warehouse world, and something much slower, more akin to the world of waiting and patience we think of as being an extra for a film.

As with so much of my work, the instructions you get are via headphones, and need a voice. So I’ve started to play with computer voices, which are fast developing and are sometimes uncannily realistic. Also, we’ve recorded everything binaurally, so the “child” computer voice telling you what to do (everyone receives different, synced audio) appears to be coming out of the house sound system, confusing public-private boundaries.

FringeArts: Can you talk about the unknown quality, from the creator’s perspective, of The Extra People?

Ant Hampton: The possibility of chaos and disorder is always there of course—the risk that you won’t get the action right, that you’ll miss something, or someone else will, etc. I’ve always been very much in love with the quality that comes from an unrehearsed, non-professional performer agreeing to put themselves at risk like that: it’s at the heart of most everything I’ve made, and I think is linked in this instance very strongly to the picture of dementia I have, based on experience dealing with family members with Alzheimer’s. That kind of wide-eyed, yet eager-to-please mode is heart-breaking to me. The look around the room that says, “Is this right? Is this what I think it is? What do I think this is? Am I lost?”

FringeArts: Why did you want to work with 30 participants/audience members?

Ant Hampton: It’s funny how 30 is both a large number, for an Autoteatro piece, and yet a very small number for the kind of theatres it will be shown in. And I guess really I started with the idea of 15 in the seats, and 15 on stage, and a theatre big enough to mean those 15 in the seats barely constitute an audience. I was interested to work against the notion, so easily taken for granted in an affirmative way, that the theatre is a place for collectivity. By pulling away from theatrical gesture, the psychology of the space I mentioned earlier can be felt as the main driving factor. And of course, for the participants, being on stage is always going to be ‘theatrical’ anyway. Fifteen people together on stage, unlike in the vast auditorium, does become a group and it takes very little for a collective gesture, even if banal or functional, to become a dramatic one.

Thanks Ant, looking forward to becoming an extra person myself!

15 slots are available every 30 minutes. All tickets must be purchased in advance. In order to be admitted into the show please arrive 20 minutes before your showtime to check in and prepare for your experience. Please plan your travel to the venue accordingly. Thank you!