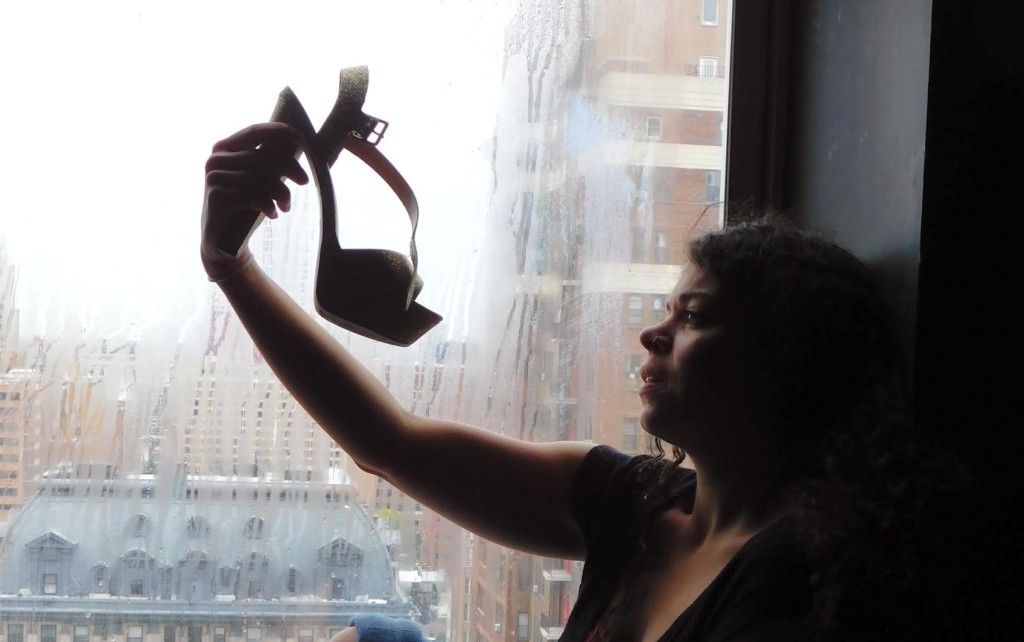 The boredom of the barrio is quickly relieved. Young, round, Puerto Rican-American Ana’s eyes light up. She leaps out of her seat as in strides a her superhero in a purple leotard with gold trimming and a red and gold diadem: the Amazing Voice. “Welcome back,” she cries, “to the long-awaited next chapter of THE ADVENTURES OF BARRIO GRRRL!”

Ana and the Amazing Voice speak in syrupy tones. Excited and exciting, they drag us behind them into a fantasy world. Ana receives mail: she’s gotten into Yale! She calls her grandmother, with whom she argues over the phone: not jail, Yale! No, I haven’t gotten into trouble. Another piece of mail: Ana has been named Miss Boricua USA!

Then in walks Lulu, tall, bodacious, pissed off, and accompanied by two policemen. She pulls off her sparkling gold heels to massage her feet: “On top of everything, huge fucking blisters.”

In Lulu’s Golden Shoes, written by Philadelphia playwright (and Tony winner) Quiara Alegría Hudes, every character embodies a contraction, a collision between fantasy and reality. The prostitute Lulu is idolized: idolized by Ana, because of her kindness, strength, sexiness, and lack of temerity. A woman with no options, she fights, yells, gets drunk, reaches out, smiles, scowls, and says exactly what she thinks. She’s idolized, too, by men she hasn’t slept with yet. At the same time she is despised by Ana’s mother Mary (Anita Holland), who sees her as trouble, corrupted, a potential bad influence on her daughter, and despised much more deeply by a white male establishment embodied by the clownish Alchemists (Davey Stratten White and Chris Anthony).

Director Brenna Geffers plays up the clownishness of fantasy, in the Alchemists especially. As they explain and execute their diabolical plots, they climb monkey-like across corpses, leap onto one-another’s shoulders, hobble myopically behind magnifying glasses. Through theatricality we find distance from the danger inherent in Ana’s existence until such moments as Hudes’ writing becomes clear, real, and grim: Lulu bitching about her blisters or bragging about her sexual conquests; Ana’s mother playing the whore to her ex husband.

Other moments are so dark they’re funny: Ana eating raw onions to win an argument with her mother because she is so frustrated, and so young, she cannot put words to her pain.

Rather than playing up the comical at the expense of the tragic or the tragic and comedy’s expense, Geffers’ production hopscotches invisibly between them. Somewhere in the middle we Hudes’ rage at the contradictory attitudes towards women which cover up cruelty, commodification, and violence. The idealization of the female figure, something prevalent everywhere from the barrio to the unemployment office to comic books to halls of power in which the Alchemists relate their findings to their big boss, covers up a criminal lack of respect. 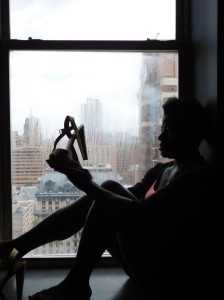 Lulu’s gold—both her imagined gold heart and the gold shoes which enhance her desirability, her perceived femininity, and her sexuality—are lusted after by the men who despise her for her “whoredom.” This is how a 17-year-old’s imagination comprehends the commodification of female life.

Hudes understands the words with which the weak are reified, and she transcribes them without caveat in the Alchemists’ coldest speeches: “In debt to the bank. / A leech on society. / She drove with an expired license. / Uninsured. / No safety net. / Spoke Ebonics on the street. / Spoke Spanglish in the home. / Seventh grade math. / Illiterate. / [. . .] Did not vote for the president! / Section 8 housing. / Welfare addict. / An unclean urine sample. / Pregnant. / Needles flopping from her veins.”

“It was almost too raw,” Hudes reflects in an interview with the Philadelphia Inquirer. “LULU’S GOLDEN SHOES was me railing, screaming to the universe about being a girl in an urban Latino landscape.” There is humor in the writing too, silliness and a joyful, playful theatricality which lean against Ana’s uncharmed existence. Geffers’ production gives full expression to both sides of this contradiction, simultaneously protecting us from tragedy and leaving us open. This is a play that is constantly surprising, entrancing, and always a step ahead of expectations. [The Caplan Studio Theatre, 211 S. Broad St., 16th Floor] July 15 – August 2, 2015. flashpointtheatre.org.