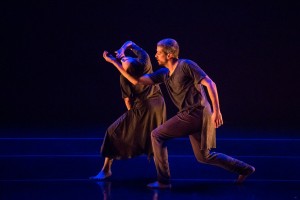 It’s Wednesday, just after noon. Roni Koresh sits on a chair in a corner of the Rittenhouse studio, which became the company’s new home last year. “Beautiful!” he calls as out as four dancers trap a fifth between them. They’re like possessed marionettes, their jutting elbows unexpected but controlled. In unison, their hands snap upwards into a clasped clap and when they fall just moments later, Koresh urges them to hit the right accent with a loud “Boom!”

The lights are low and as the piece comes to a close, the dancers perform a cappella, accompanied only the sound of their own breath.

They’re gearing up for the third annual Come Together Festival, which opens at the Suzanne Roberts on July 22nd and runs through the 26th. And even though they’re just coming back from an early summer break, the ten dancers at today’s rehearsal are ready to hit the stage with company favorites including Aftershock and Ravel’s Bolero.

Koresh explains that the festival remains to true to its namesake, bringing together “multiple dance companies that don’t overlap during the year.” Even though he’s expanded the festival to include non-Philly companies and looks forward to a time when it will hopefully garner national and even international attention, he notes that he will always seek to maintain a 75%/25% balance.

Back in the studio, both he and veteran dancer Micah Geyer count aloud as Geyer takes newcomer Vanessa Guinto through a duet section. The wiry 21-year old, a recent Point Park grad, is one of two dancers Koresh accepted in its most recent auditions, during which nearly 200 hopefuls filled the studios and the lobby.

Guinto is hurrying to learn nearly 30 minutes of repertoire in time for the festival and it’s heartening to hear the older company members cheering her on. The dance world can be very competitive, but Koresh maintains that his company is his family; his studio, their home.

This year’s festival drew approximately 90 applications from 70 different companies and independent choreographers. Koresh, Rector and Festival Director Haley Bradstreet narrowed it down to just over 30—no easy feat considering that Bradstreet was the only one not touring during the selection process.

With so many dancers to coordinate, the festival takes its toll on everyone involved and even Koresh admits that he has to pull back some nights in order to avoid “overdosing.” But he always attends tech and opening night and makes it a point to see companies he’s never seen before.

“I’m always amazed by the creativity of some choreographers,” he remarks. “How [come] I didn’t think of that?”

But it’s really the commitment of the individual dancers that continues to inspire him. “I was given the opportunity to give them an opportunity.” As such, he doesn’t give himself the luxury of getting tired.

“There a lot of separation in the dance community,” he explains: the ballet companies, the modern companies, the vernacular dance or what he calls “downtown” companies. “I didn’t even know how much talent there was in Philly!”