Excerpted by kind permission from NealsPaper.com.

The title of Jonatha Brooke’s presentation with music, MY MOTHER HAS 4 NOSES is literal. 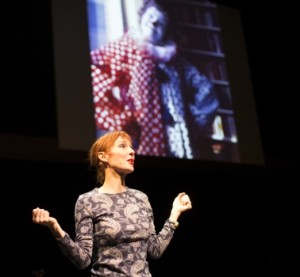 mother, Darren Stone, a published poet, was a Christian Scientist. She developed cancer in her jawbone that spread to her palate, nasal passages, sinus membranes, and other facial regions over a 18-year span. “Stoney” (as the mother was known) believed prayerful intervention would whisk away her malady and restore her to pristine health. Pain and an amazing maxillofacial cavity ended that fantasy. Her suffering was such, she agreed to see a doctor. After radiation and extensive operations, Stoney had a new visage with four interchangeable prosthetic noses.

If it sounds as if I’m being too lighthearted and glib around what had to be harrowing ordeal, I am only following the jaunty, amused, bemused tone Brooke establishes in her play. Brooke may have gone through a cavalcade of emotions while Stoney was alive, but she approaches her experience with the humor of hindsight. Brooke establishes her mother as a character who, with little provocation, put on bizarre costumes, role play, entertain as a clown, sing songs of her own invention, and fashion rimshot jokes. Stoney would utter a snappy punch line or bon mot, and Brooke would hear the leitmotif, “That’s good! Boolie, write that down!”

Slides, videos, music accompany the narrative. The songs are competent, and Brooke sings gorgeously, but the words and emotions in the script are more real and affecting. The music is as jaunty as anything else in NOSES, but it sounded like everything you might hear on WXPN and lacks to originality, sincerity, humor, and sentiment of the narrative.

Jeremy B. Cohen earns kudos for the pace of his direction and the lively tone Brooke maintains throughout. The set by Caite Hevner Kemp marries the hominess of a kitchen table with the feel of a high-tech studio is a way that blends the intimacy of Brooke’s story with the contemporary sound of her music. Kemp also did the projection design, which was evocative and excellent.

MY MOTHER HAS 4 NOSES sneaks up on you. It starts as an intimate conversation with Brooke sharing some memories, builds with what Stoney’s beliefs, habits, and impulses wrought in her life, and ends with dementia that Stoney develops and at times comprehends she has. It is told in a sprightly, carefree way that demonstrates Brooke’s wit and intelligence. But even as Brooke retains a patina of cheerfulness to the end, her story tugs your heart.

Just before Brooke picks up her guitar and winds down NOSES she reads one of Stoney’s poems from a volume of published verse. From the other compositions Brooke has read, you get the impression Stoney is at best a gifted amateur. Brooke reads a beautiful, well crafted, perceptively astute poem of her mother’s, and your assessment goes out of the window. Stoney can write. After we hear from Brooke for 75 minutes, Stoney gets her literary say. Read the full review >> [Haas Stage at People’s Light & Theatre Company, 39 Conestoga Road, Malvern, PA] June 16-28, 2015; peopleslight.org.