As Angel Corella’s first season with Pennsylvania Ballet draws to a close, it’s safe to say that his tenure as the company’s artistic director is off to a very impressive start. In Keigwin, Fonte and Forsythe, the dancers are, once again, more in sync than ever before and the eclectic program offered a meaty counterpoint to last month’s rollicking Jerome Robbins bill. 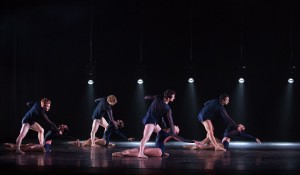 First up was William Forsythe’s stark The Second Detail. Set to music by Thom Willems, the work reminded me of a perpetual motion machine, or a kinetic sculpture, with dings and drops aplenty. Premiering in 1991, the work seems to push Balanchine’s leotard ballets passed their breaking point, and the dancers appear in light blue from head to toe. Hips jut, backs extend and toes point inward in an oddly neoclassical motif that carries the work forward, at which point the dancers port de bras begin to resemble those of marionettes being made to vogue.

It’s an athletic piece and because the wings are drawn back to reveal the backstage, dancers are essentially “on” throughout the entire work. They’re allowed to rest on a row of stools that lines the back of the stage but they remain in character, straight backed, hands on knees, distant without a hint of coquettish turnout.

Canvas by Larry Keigwin is a pretty, buoyant ballet. Skirts swirl—coral, sea foam and yellow—as the barefoot dancers pace, then run, drawing concentric circles around one another, arms held at their sides as they begin to leap through the air like Irish step dancers. A delicate flirtation builds, in Friday night’s case, between James Idhe and Brooke Moore and although the work pales in comparison to Forsythe’s, Moore was particularly on point in both pieces: aloof and confident in the first, but warm and inviting in the next.

It was Arian Molina Soca, however, who stole the show with a preview from next season’s production of Don Quixote. Molina hails from Cuba and as soon as he began to dance, it was easy to see that his performance in Fancy Free was just the tip of the iceberg. He is truly a world class dancer; he doesn’t just excel in the virtuosic leaps and turns of classical ballet but he lands them all with an easy grace, as if they’re no big deal. His partner, Oksana Maslova, also deserves mention, especially for her seemingly inhuman flexibility.

Rounding out the evening was the world premiere of Nicolo Fonte’s Grace Action. Soloist Mayara Pineiro, who defected from Cuba at the age of 17, really caught my eye: her movements were crisp and precise and even though she spends a good part of the ballet airborne, sailing from one partner to the next, she is fully in control.

Fonte’s choreography is fluid and seamless, with praying mantis-like dancers dropping to the floor before soaring into the air, feet flexed. Brad Field’s lighting design and Martha Chamberlain’s navy blue costumes give the work punch, carrying it through to its 6-couple crescendo before fading into a short solo by Ian Hussey and finally stillness. [Merriam Theater, 250 S. Broad Street] June 11-14, 2015; paballet.org.