Excerpted by kind permission from NealsPaper.com. 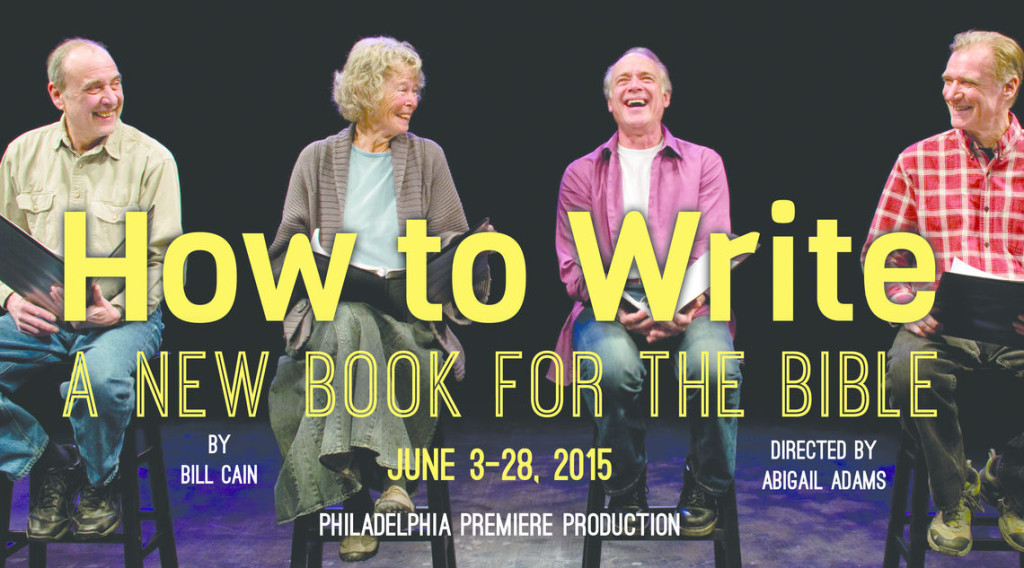 I say it often, and I mean it sincerely. There’s no pro like an old pro. This filtered through my mind as I watched Bill Cain’s HOW TO WRITE A NEW BOOK FOR THE BIBLE at People’s Light & Theatre Company. Alda Cortese, Peter DeLaurier, Stephen Novelli, and Greg Wood gave me full and thrilling opportunity to see their combined skills and well-honed talents at work.

HOW TO WRITE A NEW BOOK FOR THE BIBLE is a story about a life, a biography centered on the changing regard we have for our parents as we see them age. It focuses on the author’s mother, Mary (Cortese), a woman who ineluctably retains her character in spite late-life crises such as light dementia and cancer. Cain  borrows the structure of a biblical episode, introducing scenes with language such as, “And it came to pass Mary was a sneaky smoker. A smoker was she who would, in spite of her cancer, retreat to the bathroom with cigarettes her son, Bill, had to find and destroy.”

The conceit works. The biblical format become an excellent guide for telling a family history. Cain is witty, and the People’s Light cast maximize every line and innuendo naturally. We long to know what is going to happen next. And when we do know — progression of cancer is likely to have a predictable result. — we are eager to see Cortese and company show us the humor, warmth, affection, irony, and reality that infuses Cain’s play and Adams’s production.

Cain’s writing is intelligent and informed by everyday common sense. His observations are keen, and he makes shrewd connections between events. HOW TO WRITE A NEW BOOK FOR THE BIBLE shows Cain’s range as it comes after another of his plays, Equivocation, which received an illuminating production at ActorsNET this winter and is scheduled of the Arden Theatre Company’s roster this fall. Jessica Ford’s costumes say middle-of-the-road Americana as much as anything else in Cain’s play or Adams’s production. Roman Tatarowicz’s set is all-purpose and versatile.

The saga of the Cain family is one of Americana. It contains all of the watershed moments and is peppered with all of the eccentricity that makes sharing stories about families a perennial American pastime. Much of Cain’s story has cognates for us all. As we watch Bill (Wood) cope with Mary, Mary commune with her husband, Pete (Novelli), who we eventually learn was funny and devotedly paternal, Bill’s brother, Paul (DeLaurier), becomes distant while in touch and retaining family affection, and Mary cope with mortality, we are reminded of similar scenes among our parents and siblings.

Cain populates his play with characters in a sense that goes beyond being a part listed in a dramatis personae. Mary, Bill, Pete, and Paul are characters is the way your Uncle Rudy is a character when the suits he bought 40 years ago turn out to be in style every eight years. You know, char-ac-ters — people who have their own quirks that keep our worlds amusing. These are the hardest people to capture on stage because they don’t go to the extremes people in constant turmoil, conflict, agitation, or good moods do. Few lives are as cataclysmic as the staple stuff of drama, but Cortese, Wood, DeLaurier, and Novelli recognize the traits and small eccentricities that make each of unique while letting us remain reasonably functional. Read the full review >> [People’s Light & Theatre Company, 39 Conestoga Road, Malvern, PA] June 3-28, 2015; peopleslight.org.