When you’re stepping from one man’s shoulders to anothers or doing a backflip into a blind catch, you have to have trust in your collaborators. For LEAPS OF FAITH AND OTHER MISTAKES, Almanac Dance Circus Theater group has assembled a team of artists in whom you can have absolute trust. Cofounders Nick Gillette, Ben Grinberg, and Adam Kerbel return for another bout of absurd acrobatics. They are joined in their breathtaking explorations of the limit of trust by performer Nicole (Cole) Burgio. But the impressive team extends beyond the floor. Musician Patrick Lamborn returns with musical accompaniment; master playwright Josh McIlvain brings new dimensions to the work with original dialog; lighting designer Laura Bickford draws on years of experience working with international artists at NYC’s Bill T. Jones company and Live Arts. Almanac is in safe hands with these folks. To accompany this photo essay, the creative collaborators share their thoughts on working with the company. [Fleisher Art Memorial, 719 Catharine Street] June 24-28, 2015; thealmanac.us. 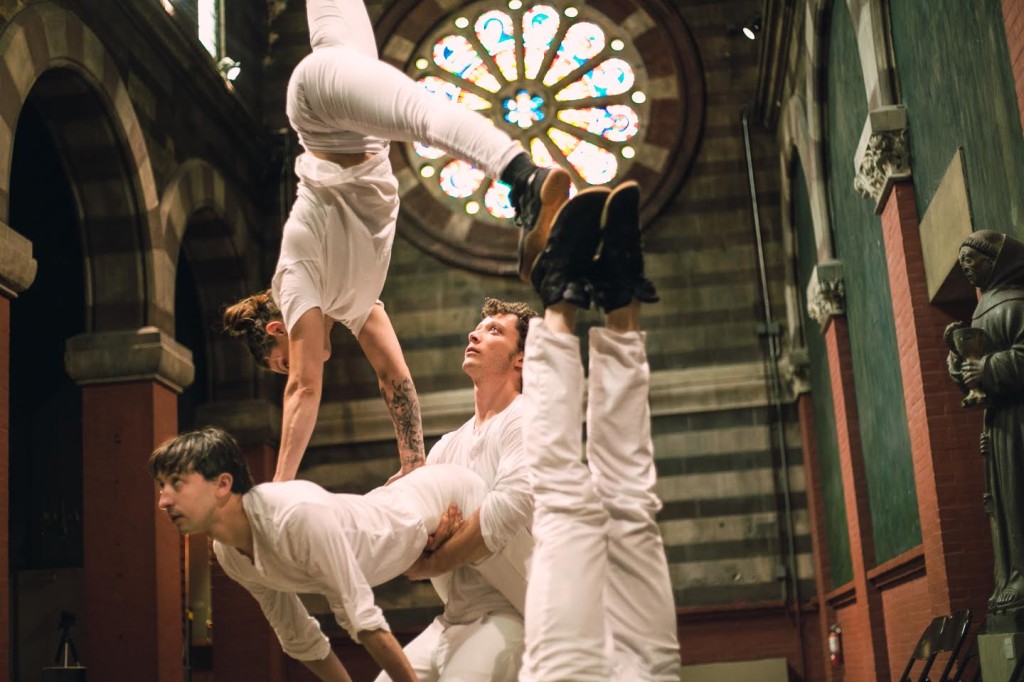 “Almanac had performed a couple times in Nice and Fresh, the performing arts series I run, and knew them from that. They were interested in adding different artistic elements into a mix that was still based in devising work, but they wanted to expand from just the physical. For me, it was nice not to be the producer/director, and to just be able to write.

I kept a very open process which was if I thought of an idea or scenario that I thought might work for the group, I would just write it down and bring it in. I would sit in rehearsals and bring material and watch mostly how the performers interacted during improvisations, or even in conversation. I wrote a lot with the performers in mind, and didn’t box myself into too much. The theme was always what happens when you place too much trust into a group, which is nice and broad, and so much of it circled around that and the individual characters of the performers, who essentially play versions of themselves. Sometimes I would pick something up from a group improvisation, and run with it, but mostly it was just from observing and then later on, out and about in the world, some idea and something would happen that would connect with the group and I’d create material around that.”
—Josh McIlvain, writer. 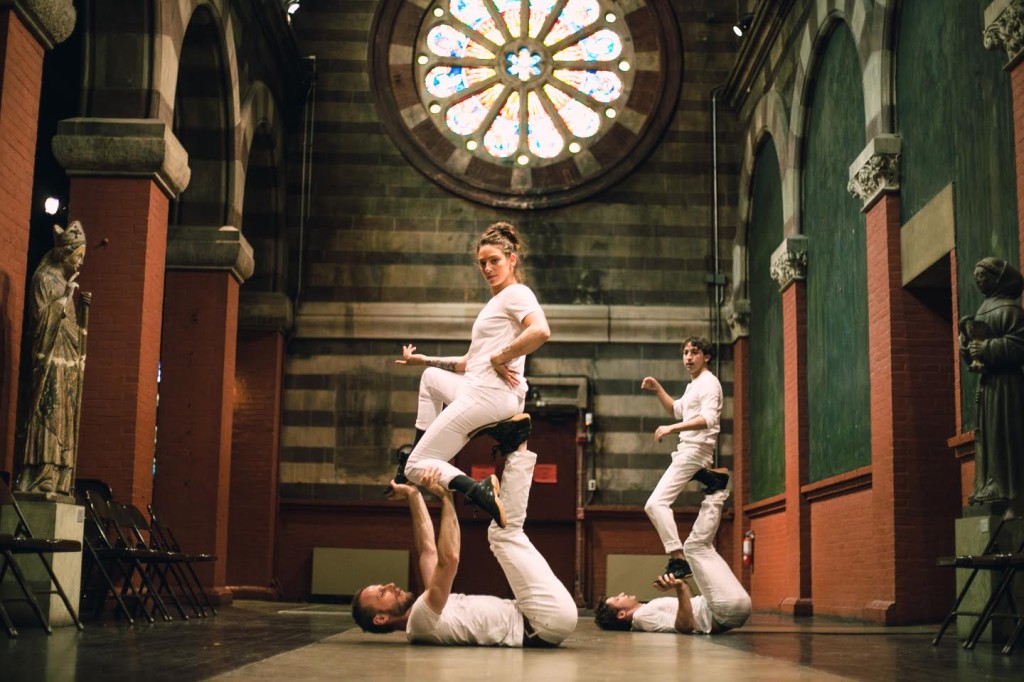 “I met them the Almanac guys through teaching acrobatics at the Pig Iron School. I’m primarily a circus artist so I have never had to memorize dialog. I’m nervous to talk in front of an audience, but I feel taken care of by the boys so I think it will be okay.”
—Nicole Burgio, performer 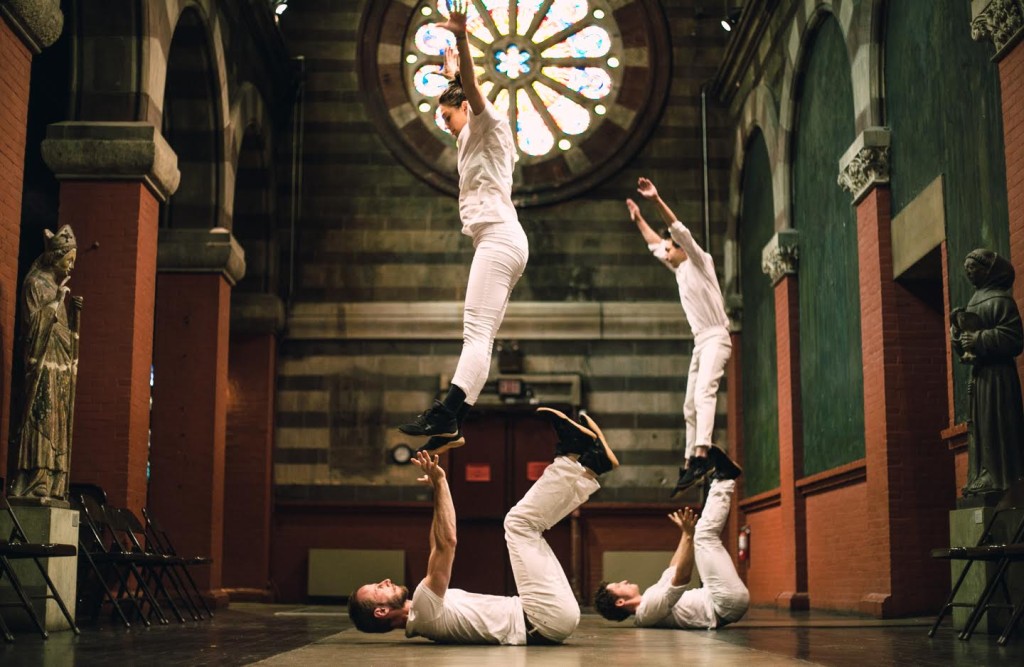 “I love to work with Almanac because they’re extremely thoughtful and meaningful collaborators. The root of their collaborative instinct comes from being great communicators. We work as a team to create something together where each person’s perspective or insight is valued equally. We can all participate in giving feedback to each other’s disciplines and discover together what the piece will become. I also work with Almanac because I love scrappy, I hope to embody scrappy. I feel most creative and useful when I can get in the dirt with a team of artists and make something together with honesty, rawness, and a few small lights. I also know going into this process that I don’t know what the end product will be. It’s not up to me to impose my aesthetic on the product, but rather to show up and listen to what the space might tell us about the piece, what the piece might tell us it needs, or what we can all discover together throughout the process. That collaboration is incredibly fruitful and rewarding. I also really enjoy working with friends and pushing the envelope with a unique and daring non-theatrical space like Fleisher Art Memorial. It should be a fun experience!”
—Laura Bickford, lighting designer 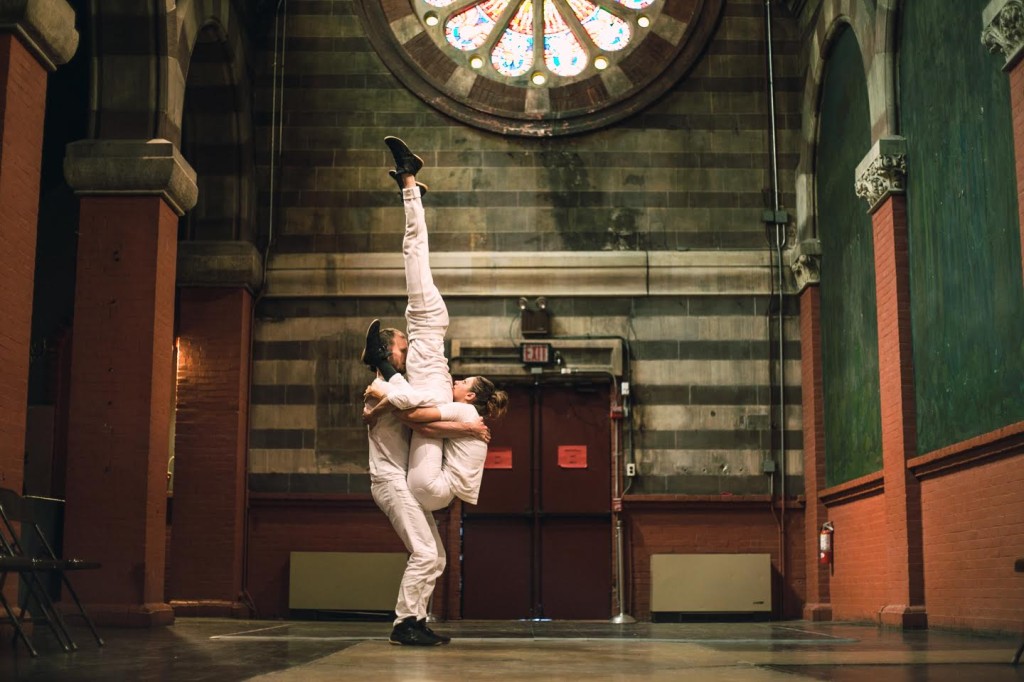 “As a designer, a lot of my work entails a certain amount of kowtowing to a foreign concept: something that requires more intellectual forethought than physical acuteness. It’s a nice change of pace for me— to have a corporeal playfulness; I get to be a musician. I’m excited to see how the thing we’ve all played with changes. Having an audience is gonna take it to a whole ‘nother level.”
—Patrick Lamborn, musician 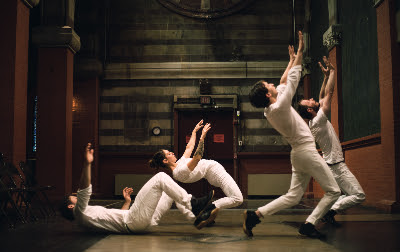 “I wrote a bunch of material inspired by Rainer Maira Rilke’s The Notebooks of Malte Laurids Brigge, a book I was supposed to have read in at least two college classes and never did. So I was reading it pretty early on when we started actually working on the thing, and used a number of passages as jumping off points. Basically there is a lot of interior obsession and dense, claustrophobic writing in that book, and it’s fun to play with.

I’m excited to see what people will think of it; I think it will either be very exciting, or it will be, what the fuck was that? But that’s a nice level of risk to have.”
—Josh McIlvain, writer

All photos by Jenna Spitz