“The best ingredients for likeableness are a happy expression of countenance, an unaffected manner, and a sympathetic attitude.” ~ Emily Post, Etiquette 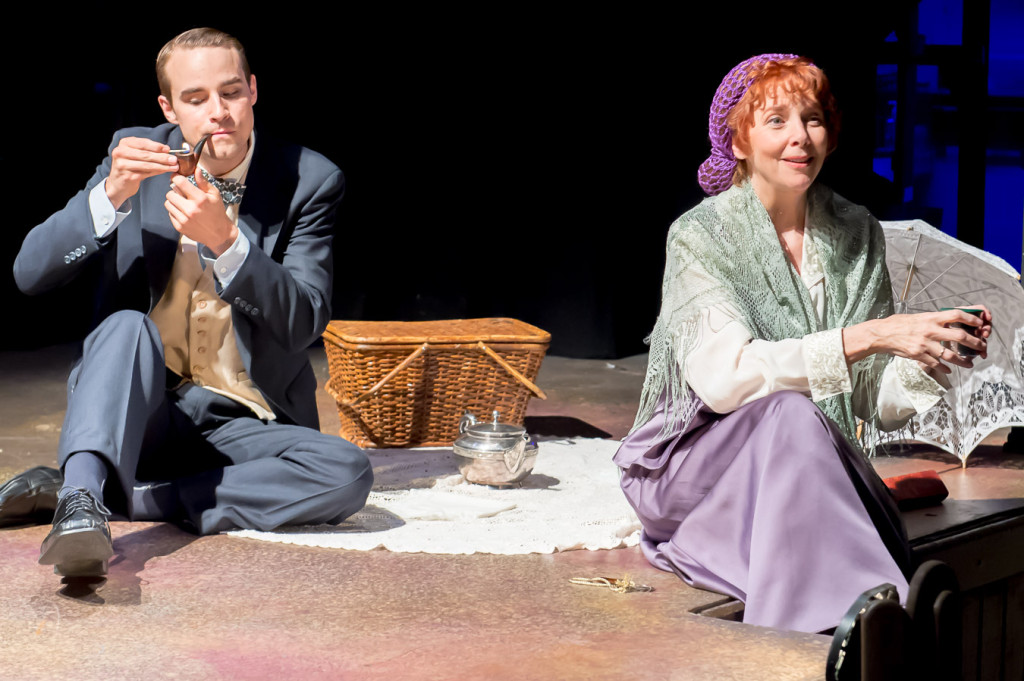 A sparkling performance, Frank E. Reilly’s captivating new play, POST HASTE, based on Emily Post (Penelope Reed), matriarch of manners, premiered this weekend at Hedgerow Theatre.  In this refreshing tale of triumph and etiquette, we catch up with Emily in April 1915, as she is about to embark on a cross-country journey with her son, Edwin M. Post, Jr. or “Ned” (Brock Vickers) in her roadster on the new Lincoln Highway. She has packed her travel trunks and is on her way from New York City, ready to traverse 3,200 miles to San Francisco to write a travelog of the experience, and the Pan-American Exposition, for Collier’s Magazine, but possibly to leave behind another type of baggage. Emily is recently divorced at this point in her life, not an ideal state for a woman in that era, and is on a bit of a rocky road in terms of her relationship with the driver, her son “Ned”. During their trip, mother and son will cross bridges, explore towns, endure endless mud, sleep under the stars and rediscover tremendous love during their tumultuous tour together.

Penelope Reed positively channels Emily Post.  A buoyant, energetic rendering of a woman who decides to repurpose herself in order to survive, and thrive, Reed’s ability to shift moods almost seamlessly, and to absorb and retain audience interest reveal themselves in a part that suits her talents well.  Brock Vickers portrays Edwin “Ned” Post brilliantly, his comedic timing in tune with the script, but he is also able, with ease, to draw aside the comic curtain to show a more serious side to his character. Much of the story has the feel of being confided to the audience, creating a bond that draws them in to listen to the life and times of these two depicted individuals.

Upon a sketch of a set (Zoran Kovcic), a cleverly designed bare bones roadster, Reed and Brock work well as mother and son. Any more on the stage with these two is unnecessary.  Lighting (Rusty Davenport), sound (Jared Reed) and staging are skillfully used, not only to delineate, but also to lend expression and depth.  During a disagreement, or the telling of two different sides of a story, the actors are on opposite sides of the stage, each separately lighted.  A sound track of gossipy chatter introduces the mood at the beginning of the play, an “arugah” may have many meanings depending on length and volume. A picnic played out upon the apron of the stage feels shared. Technical polish adds distinct shine. By rearranging layers, the attractive period costumes (Cathie Miglionico) are made highly versatile. [Hedgerow Theatre, 64 Rose Valley Road, Media, PA]; June 10 -June 28, 2015; hedgerowtheatre.org.

One Reply to “POST HASTE (Hedgerow): A play in fabulous form”