Skip to content
Nell Bang-Jensen has drive. She’s a high octane, finely tuned machine of fully loaded artistic talent. And other motoring metaphors. As an actor, she seduced audiences at this season’s Luna show Quills. She served as dramaturg for the Wilma’s acclaimed production of Rosencrantz and Guildenstern are Dead. Her theater company, Murmuration Theater launched in 2013. Now she’s going SoLow, with help from collaborator and director Maura Krause, for ROAD MAY FLOOD, a one-woman show that takes audiences for a ride, literally. Part of SoLow Fest 2015, the piece features Nell as a driver and the audience as passengers on a real car ride. Phindie talked to her ahead of its premiere. June 22-24, 2015; solowfest.com. 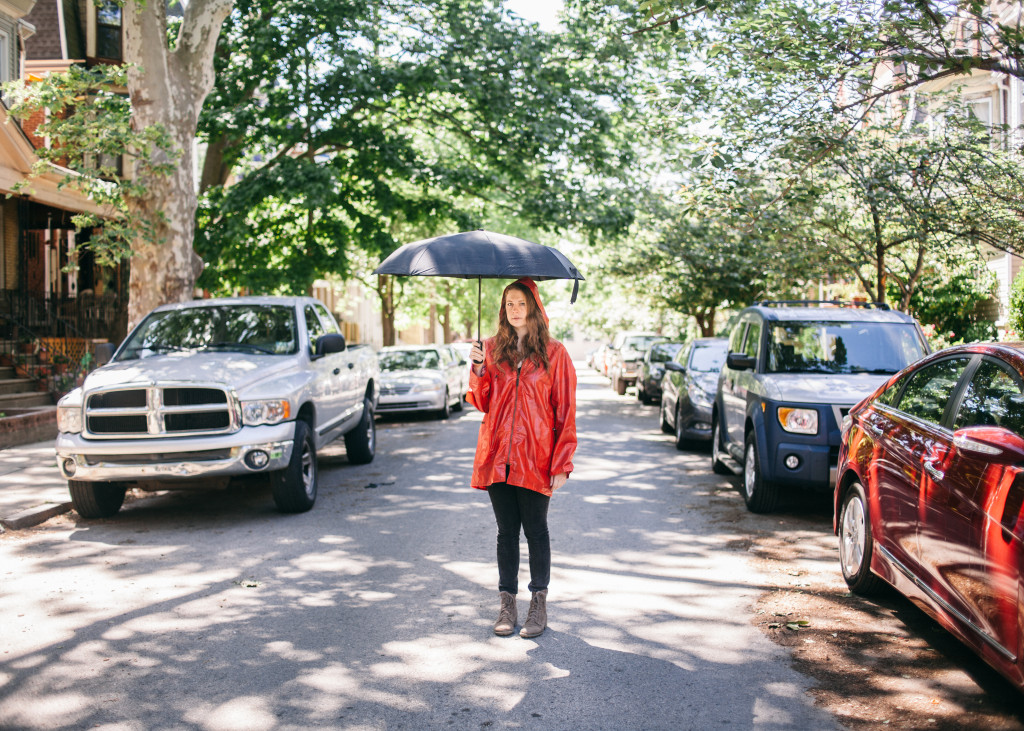 Phindie: What Inspired ROAD MAY FLOOD?

Nell Bang-Jensen: The title comes from a road sign I saw off Kelly Drive that simply said “Road May Flood.” I was immediately struck by how ludicrous this sign was: any road may flood at any time. Of course, the sign was implying that this particular road (because of its location or history or a number of other factors I don’t really care enough about to understand) was more likely to flood than others, but it made me question what this knowledge would give drivers: what is the purpose of having that sign? Would people drive differently knowing that that particular road may flood? Avoid it altogether when it’s raining? Try to do a quick risk/benefit calculation when deciding whether it’s worth it to go down that particular route? Would drivers’ reactions to a flash flood be faster if the idea had already been planted in their minds by a sign?

Maura Krause (my co-creator and director) and I discovered that we both play this game in our heads a lot. We have been good friends for a while, and this winter were having conversations (some of which took place in cars) about how we often tend to make decisions only after confronting what the worst possible outcome of something could be. I think all humans do this (though some more than others). We realized that the “worst case scenario” impulse can be what leads people to do things as subconscious as buckling seatbelts when in a car, or as deliberate as a story we heard recently about a couple who always travels on separate planes so that if one crashes, their kid will still have one living parent.< Phindie: How did the collaboration with Maura work?

Bang-Jensen: I liked the collaboration because I like Maura Krause quite a lot. Honestly, it has been one of the smoothest collaborations I  have ever had. It was clear from the beginning that I would be performing, and she would be directing, and we would  both be doing the creating and writing together. The show came directly from conversations we were having this winter, as friends and it’s exciting to now think about expanding this circle to include an audience. We usually rehearse at one of our apartments for about 3 hours at a time and talk through things and play around and experiment. We usually meet in the evenings, and, as a result, have started somewhat of an inadvertent meal-share program.  Whoever is hosting ends up feeding the other one. It’s been really nice to make art with a friend over bowls of whatever we had in our fridges that day, and I think this sort of casual, conversational attitude has carried into the show.

Phindie: Do you enjoy road trips?

Bang-Jensen: I think that cars are magical places. People who ride in cars every day may not feel this way, but I don’t happen to be one of them.  There is something about the particular spatial arrangement that seems to reshift our natural ordering. I remember my mother once said that parents who are driving carpools of high schoolers around are rendered invisible, and because of this, once a week on the way to school was the only time when she could actually get the scoop on what was going on in my teenage life. Somehow, when she was relegated to chauffeur, we had very different kinds of conversations. This might also have something to do with our aversion to eye contact as humans.

Phindie: Can you remember a favorite car journey?

Bang-Jensen: It is hard for me to name my favorite road trip. They were a little bit ingrained in me as a child because my family made a 21-hour drive to Canada every summer from where we were living in New York at the time. It became a ritual; the most eventful trip being the one where I spent hours cutting my doll’s hair in the backseat and then began weeping because I had “ruined her forever.” Another memorable road trip occurred many years later, when I was living abroad and two good friends came to visit me in Iceland. We took a trip around The Ring Road (Iceland’s only “highway” that is at times flooded by sheep) and blasted pop music while driving around volcanoes with 24-hour sunlight around us. It was pretty spectacular.

Out of all of these road trip experiences, however, I actually value the solo road trip the most. There is the simultaneous sense of control and adventure, and I do my best thinking in cars while listening to music. It is is one of the few places we have in our lives where we feel comfortable being alone, with little distraction.

Bang-Jensen: I really love the way that the SoLow Festival has taken root in Philly as a form of low-stakes experimentation and a real coming together of the theater community. It feels like an actual place for creative risk, which I think is much needed. Maura and I, who both wear a lot of different hats in this particular community, were excited by the opportunity to be creators without there being much of a producing burden.

Phindie: Why did you limit the audience to just a car full?

Bang-Jensen: The show feels very intimate to us, and full of the conversations and thinking that is done in cars, so it just felt right to limit our audience to the number of people who could fit in the backseat. Also, worst case scenario, if people think the show is stupid, only so many people will have seen it.

Phindie: Before this, what was the smallest audience you’d ever performed to?

Bang-Jensen: I feel like I might get philosophical here about how we’re actually always performing to an audience, even in our one-on-one conversations with people and sometimes (scarily!) even to ourselves. I’ve given many “performances” throughout my life that just one or two other people have witnessed. My family has definitely been victims of private performances (some musical, some theatrical, some pure tantrums) that I insisted on as a child (and more embarrassingly, as a teenager). I had a lot of feelings.My a cappella group in high school also once sung “My Girl” in a Pizzeria Uno’s in Burlington, Vermont to an audience of five who I think were all related to us.

Phindie: Are there any other SoLow shows you’re excited to see?

Bang-Jensen: SO many! Maura is actually a double agent because she’s also directing a show called The Unfound Nudibranch, which is about grief, which sounds both exciting and terrifying to me. I also have to give a shout out to Kevin Meehan, who is a true SoLow loyalist and is always full beautiful imaginings. I have no doubt Tomorrow Is A New Room will be inspiring. Also, I love how many shows this year seem to be about bicycles. And feminism! Definitely keep an eye out for the feminist bicycle shows.

Bang-Jensen: Funnily enough, I am flying out to California the day after we end the run of ROAD MAY FLOOD. Admittedly, I am taking a plane, but I have big romantic visions of getting to drive on the Pacific Coast Highway once I arrive. I am imagining the ocean and mountains and big sunglasses and feeling like I’m in an episode of Mad Men. I recognize this is spoken with the naivety of someone who has never actually been to this part of the country before, but it’s nice to dream.

Phindie: Dream on Nell, and may the road rise up to meet you. Just watch out for floods.