It’s all very well to study entertainment and arts management in a classroom, as students in Drexel’s EAM course do, but there’s no substitute for actually putting on a show. This weekend sees a FREE staged reading of new musical ANY OTHER WAY by students of Drexel professor Brannon Wiles class “Producing for Live Entertainment” 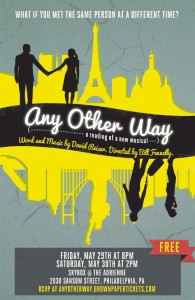 Over the course of this spring term, students have been engaged in the development of a new musical by writer David Reiser inspired by his relationship with Broadway veteran Caissie Levy (Les Mis, Ghost, Hair, Rent, Hairspray, Wicked). Through producing the work, Wiles’s class has been exposed to an early-stage project and the creative development process. They gave comments to and participated in discussions with the writer and director after seeing an earlier version of the script, and they’ve witnessed its subsequent evolution.

Reiser and Levy met outside the stage door of Philadelphia’s Merriam Theatre while Levy was on tour with Hairspray, and married in 2011. In ANY OTHER WAY characters Rob and Rebecca go through the difficulties and joys of meeting for the first time … twice … and seeing if it ever could be any other way. It explores the role fate plays in our life versus the choices we make?

The students work with professional actors over the course of the rehearsal week and see the kinds of changes which continue to happen during that period. Levy takes on the lead role, and is joined by three other New York actorsfor the staged reading. Drexel theater professor Bill Fennelly directs and EAM senior Caitlin Pinick serves as Wiles’s teaching assistant and associate producer. [SkyBox @ The Adrienne Theater, 2030 Sansom Street] May 29-30, 2015; anyotherway.brownpapertickets.com.