Sebastian (aka Sebastian Cummings aka Sean Cummings) is debuting his new show SHOWBIZ, May 21–23, 2015, at the Adobe Cafe (1919 East Passyunk Avenue). He describes SHOWBIZ as “part theater, part concert special, part social commentary extravaganza.” In response to his experiences as a performer, and to the performing arts and the entertainment and news industry in general, Sebastian takes his wicked sense of humor towards the role the media plays in how we interpret the world and “the people that roam it.” In additional to Sebastian, the cast includes actors Anna Michael, Kelly McCaughan, and Icon and dancers Lainey Johnson and Patience Owen. 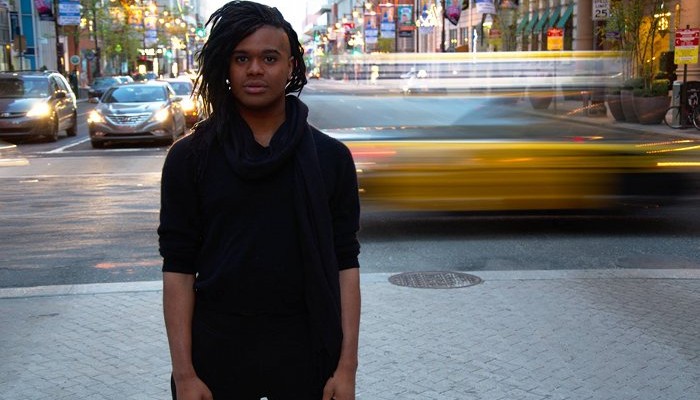 We caught up with Sebastian to ask him a few questions about the show, but to get a good flavor of what to expect, enjoy the hilarious video he made for his successful fundaraising campaign. As Sebastian points out in the interview below, he made sure that he had fun throughout the whole process of making this show.

Fringe Arts: What are the origins of Showbiz?

Sebastian: Showbiz is a “line,” as in geometry; it has infinite points, continuing forever. This “line” started with my experiences post college, navigating both the theater world and the queer world and ranging from things as obvious as the lack of roles available to anyone who has my skin color to the one dimensional nature of performance in the gay scene. All these observations gathered over the years and, for the most part, remained unchanging. Occasionally, the line that is Showbiz would intersect with another line; the media, expanding my thoughts. One needs only a day of listening in to the “media hotline” to notice patterns of how certain bodies are discussed, it’s like the media’s only purpose is to perpetuate stereotypes. Whether it’s the plethora of rappers talking about drugs and money, how a number of feminists doing all they can to alienate and reduce black women, or the “thug” campaign the media uses to describe pretty much any black man. First, I find it wildly uninspiring, second, I can’t fathom why we would even try to reduce anyone to one idea, we’re complex beings, and third, how is this dialogue shaping the way people think? So, I came up with an idea to call the system out.

Fringe Arts: How have you gone about putting the show together?

Sebastian: The text started with a parody of the news, I was writing one day to humor myself and I wrote what would eventually be my Kickstarter video. I thought it was hilarious and insightful. The rest of the script had already been written, in the sense that it happened in real life. As far as the world of the show, I watch interviews. I watch a lot of interviews. Interviews with actors, writers, anyone who has something real to say about overcoming struggles in life and in furthering their career and what happens in my mind is when I project into the future, thinking about things I want, I think of myself in the future explaining how I got there in an interview. And Showbiz is that story. When it comes to music, I just start making, I don’t have a goal to make something that sounds like “this” or what have you. I just create and when something feels right, it feels right. Over the past four years, I’ve made around 150 songs and I used my favorite ones. “Queer Night Out,” for example, was a joke. I made the music and thought how it resembled some uninspiring pop song and I turned on the mic and just started singing, being silly, trying to entertain myself and the finished product is what came of that. It’s a nice departure from a lot of the songs I had made before it, which are heavier.

Fringe Arts: You seem to be having a lot of fun with your promo materials, has this show been fun to put together over all?

Sebastian: It has been fun, because I’ve let it be fun. Usually, I stress over every detail and bring myself down, beat myself up, and this time around I aimed to work just as hard, but to entertain myself along the way. In the past I was so caught up on creating things the way they’re supposed to be created. I think that happens to a lot of us. A play looks like this, a press release looks like this, a song is structured like this and I’m done doing that, it’s boring. A professor in college once said to me, “If it doesn’t entertain you, if you don’t like it, if it doesn’t make you laugh, why do it?” I never thought it was even possible to enjoy yourself and work hard . . . but apparently it is.

Fringe Arts: Can you give us a few of the highlights?

Sebastian: The video projections are my favorite part of the show, they’re hilarious and hit the nail on the head. I also just love having that element in the show, having video, especially since videos are what we look at all day every day. The show is a comedy and comedy is probably my favorite thing to do and there is this character I like to play who is somewhat unpolished, often is nervously lower status, self deprecating in the funniest possible way, but endearing and it’s the kind of character I would never get to play out in the theater world, cause who would think to make a character like that a black male? I’m pleased that I get to do it for myself.