The  Iron Factory performance space was surely at some point an actual factory, as the crumbling concrete of the walls, unfinished wood plank ceiling, and gaping windows attest. It’s one of those apocalyptic spaces that intentionally wears its insides on its outsides. Building on its environment, the installation-set (it’s hard to say who designed it; the program lists many “collaborators” but no designers, so likely there were many hands involved) for Brat Production’s PLANT ME HERE has Technicolor-green cloth underlaying the “garden” and “burial place,” which are labeled with paper letters. Crafted tombstones decorate the latter, while the former has christmas lights and a TV wearing a party hat. Opposite them a techno-waste of clocks, computers, phones, and innumerable wires is called “The Dump.”

The installation, cleverly, never quite ends, with more green cloth and other items indicating its continuity through the entire space, accomplishing the trick of leaving the audience unaware where to sit or stand. The eventual consequence of will be that we scramble and skitter around, thus reframing again and again the definition of the “stage space”—a proscenium, a thrust, etc.

Curiously, also, the constant movement distracts our direct focus again and again, like the constant flickering of a TV set. As a result, once the performance begins people are ducking down, climbing over one another, cameras out, snapping pictures like investigative photographers.

As we enter, the performance is already going on. A pianist plays a light refrain as three young women (three of the four-part ensemble: Kahla Brown, Caitlin Dagle, Tess Kunik, Gracie Martin) in skin-toned pantyhose sort out their harvest of flowers and leafy greens in the “garden” area. They smile carelessly, casually, as they chat, and wander about the space.

An abstracted projection strikes a white sheet hanging over the garden and they scamper off—the performance has begun. The women then re-enter, now in white lacy dresses which suggest the virgin or the country maid. They enter methodically, ritualistically. Not turning to their harvest, they gather and recite the following:

So the piece begins with a wish, something that recurs, along with hopes—and elemental imagery (“I don’t want to be gold anymore / I want to be flesh / I want to be yours”)—again and again in the text.

Soon, technology invades this bucolic idyl. A young woman sits at her computer in the darkened garden, illuminated only by the faint glow of Christmas lights and the laptop screen. Grimacing, she executes a kind of spoof of typing, slamming the keys with her fingers around a glass of milk while cramming triscuit crumbs into her face. When she drinks, the dirty-looking residue around her mouth turns to mud. An audio overlay relates what she’s typing.

In her director’s note,Emma Arrick describes the piece as, “a devised piece that begins with a collection of poetry by Jason Rosenberg,” and “an experiment in the pure aesthetic interpretation of a text.”

Repeatedly, the context the performers find for Rosenberg’s words come to lovely pop ballads or folksy harmonizing, which benefits from the beauty of their voices. Rosenberg’s words translate well to this. “I was made of wood but somehow I’m still here. I lay in the mud and watched you disappear.”

In other bits, the poetry—often the same words—is chopped up into grating computer-voice, high-pitched chattering, overlapping pre-recorded statements, mutters.

“We have tried to build this work with no intrinsic meaning, we are just trying to punch you in the chest,” ends Arrick’s director’s note. 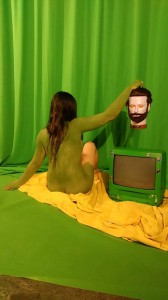 There are moments when PLANT ME HERE nearly punches. At one point, Brown, ignored by the other women, begins to sob, childish, petulant. As she continues to be ignored, she sobs as hard as she can. Eventually, Kunik presents her with a toy gravestone reading “RIP.” The sobbing becomes louder, traumatic, suddenly real. The game is over, but it doesn’t end for her tormentors, who begin to laugh. “That’s what you get,” the other girls respond to her cries of “That’s not mine! I don’t want to be here!”

A charged moment, which is then eclipsed. In fact, there are few moments in this piece which aren’t absolutely convincing, but like the pop music it so often apes, PLANT ME HERE glances over its content, never planting its feet and confronting the consequences. A major struggle is that despite its rich imagination and visual stimulation, PLANT ME HERE never digs in.

The wish for “unlimited energy” is here fully realized, in a piece that’s as charming and full of yearning as a pop ballad, as exciting and surprising as a glossy magazine, but with signs that it is reaching for something less transitory.

I would respond to Arrick that the escape from meaning, which she states as her goal, is a shallow interpretation of the power of contemporary experimental performance and its potential. To begin without intention, or meaning, is one thing; to construct complex and difficult meaning within a tangled knot is another; to consciously avoid it (to wish “to be someone else,” somewhere else) is vapidity, a characteristic of the pop culture industry.

Arrick’s “punch in the chest” is a worthwhile goal. But what PLANT ME HERE tells us is that variation, invention, and inspiration, while initially charming, are only devices, not content. You can invent a new way to punch someone in the chest, but without a fist, there is no contact. Arrick and her many collaborators have created so much that is worthwhile and engrossing; the real frustration is that they do nothing with it. [The Iron Factory, 118 Fontain Street, 3rd Floor] May 7-13, 2015; bratproductions.org.