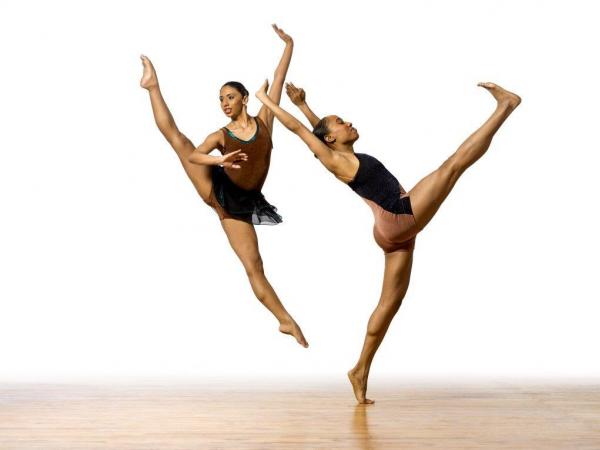 Philadanco had a roller-coaster winter when the heating system at their company studios blew out to the tune of a $20,000 repair, just as they were about to leave on what proved a very successful tour in Germany. Back in Philly this month for their spring run at the Perelman Theater, artistic director Joan Myers Brown presented Having Our Say… representing African American women choreographers with commissions for new works by Dianne McIntyre and former Danco dancer Dawn Marie Bazemore on the program with repertory ballets by Bebe Miller and Jawole Willa Jo Zollar.

McIntyre’s ‘A Forgotten Moon-Song‘ for five dancers with a hazy narrative about disconnection to one’s essence or ’inner song.’ The opening section played like a prologue to the real piece as the dancers, in flowy silks, chasse after each other, hands fluttering and repeated groupings with hands reaching to the sky. The static iconography reads as both rote and jagged at key points. The back half is more engaging as the music gets more propulsive and McIntyre gets out of her own literal way, with more lyrical muscle.

Bazemore‘s ‘A Movement for Five’ just grabbed the audience by the throat from the start in content and as danced. ‘The Breakdown’ opens with Public Enemy’s anthem “Fight the Power” blaring out depicting the social landscape of the events involving the arrest of the so-called Central Park 5, young black men accused of raping a woman in New York in 1989.

A pulsing crystal sound is heard as the music shifts to a somber soundtrack and the women exit. Bazemore’s middle section ’For Five’ has them dropped to the ground in a series of movements of being dehumanized and handcuffed. At the center is the electrifying Joe Gonzales, grotesque writhing in Bazemore’s primal scream solo articulating psychic and physical assault.. ‘Exoneration?’ is the question in the final section as the men try to move on from being falsely accused after the real perpetrator of the crime confesses. Bazemore recounts this episode and the issues roiling under it in with narrative clarity and a compelling theatrical arc. This is destined to be a signature work for Danco.

My Science by Bebe Miller has mid-eastern cultural accents propelled by the music of La Voix Bulgare music as Miller contemplates the kinetics of a famed physicist and translates into very sleek geometrics for nine dancers. The thread of Hindu mysticism continues the music switches to Led Zeppelin’s full version of Kashmir and this piece just rips open.

Kashmir is such a rock arena classic that using it in an alternate setting carries risks, but Miller choreographically taps its explosive musical drive with flash duets, ensemble aerials and tight unison work riding Jon Bonham’s annihilating percussion and volcanic guitar riffs. An unforgettable moment has Roxanne Lyst, Rosita Adamo and Janine Beckles drop down into the deepest plie, with their arms floating out in yogic hand asana, as Robert Plant’s vocal engulfs the theater.

Zollar is founder of Urban Bush Women, created ‘Hands Singing Song’ as a docu-dance of cultural African American sign language. First Zollar demonstrates the comic parlance with Danco women in dizzying hand signal gossip, snap downs and declarative commentary- to hilarious effect. Next is the Black pride movement of the 60s with everyone is suddenly in Black Panther berets in a series of head bowed- fist raised statements of political solidarity. Zollar dips back to the hand jive of the jazz musicians of the Savoy Ballroom Lindy and witty stylizations of be-bop jive that evokes the whole era in the coolest ensemble friezes that out micro-move Fosse.

The fifth work in the program was the solo ‘Rainbow Round My Shoulders’ by choreographer Donald McKayle in memoriam to dancer-choreographer Mary Hinkson Jackson, who died in 2014. Jackson, a Martha Graham dancer, was known for breaking industry racial barriers. Courtney Robinson danced with dramatic precision in the classic Graham style. [Perelman Theater, 300 Broad Street] April 17-19, 2015; philadanco.org.