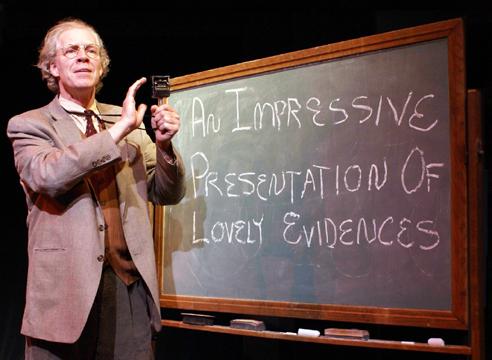 UNDERNEATH THE LINTEL is one of the funniest and most entertaining of all shaggy dog stories.

In it, a bureaucrat (Christopher Coucill, a versatile performer who brings in variety of entertainment skills to this role) who has rarely left his small hometown of Hoofddorp, the Netherlands, embarks on an adventurous world journey to hunt down the miscreant who owes a hefty fine on a 113-year overdue library book returned in cowardly fine-dodging fashion through the library’s night depository slot.

Receiving the long-absent volume, a Baedeker guide to Europe from 1873, interests the middle-aged librarian who finds it even more fascinating than the prospect of moving from his clerk position to head of acquisitions, a post for which he has a sneaky competitive rival. Following library procedure, as described in Glen Berger’s well-constructed and witty play, the librarian goes to library records to see if he can find a name or address for the dilatory borrower. What he finds intrigues him more than a loan from a century ago being returned. The member doesn’t have a full name, only an initial, A., and his address is a post office box in China. The librarian wonders how such a person even got a card.

UNDERNEATH THE LINTEL takes the form of a touring lecture the librarian gives in halls and auditoriums around the world. He is determined that people should know about his discovery and the rudeness of letting a library book remain overdue for 113 years.

Berger’s genius in is blending the innocence of the librarian, who is given to silly jokes and wonders at events and happenstances that wouldn’t faze someone more worldly, with the obsessive journey he is about to undertake by following clues to the Baedeker borrower’s identity. Berger is a teasing writer. He’ll lay down clues and know his audience will beg mentally for the librarian to see them to their conclusion. He is also a master of the three-pronged joke in which the last in a series of points will end in nonsense or some turn of speech that characterizes the librarian. Berger also blends history and a sure sense of literature, Biblical and otherwise, with a knack for silly contemporary social commentary. Berger gives his librarian a pedestrian and childish sense of humor, that of a little boy who thinks he’s being naughty by taking an extra day off from school.

It all works because everything in UNDERNEATH THE LINTEL is tinged with humor, sometimes delightfully offbeat, and because the adventure is entertaining. Coucill has been doing the play for a while. I’ve seen his performance twice before, in Wilmington and Rehoboth Beach, Delaware. Coming to Hedgerow is a rite of passage of sorts for Coucill because his parents met while studying there under Hedgerow’s foresighted founder, Jasper Deeter. Coucill directs his own show, and he has the librarian’s persona down pat without a hint of self-consciousness. Berger’s jokes come clearly through his reading. UNDERNEATH THE LINTEL provides lot of laughs, both with and at the librarian. Read the full review >>  [Hedgerow Theatre, 64 N. Rose Valley Road, Rose Valley, PA] April 10-25, 2015; hedgerowtheatre.org.