When fellow residents of a Dublin tenement slum suspect aspiring poet Donal Davoren of being an IRA assassin on the run, he does nothing to correct their mistaken assumption, to gain the admiration of his nationalist neighbors and the love of the pretty young Minnie Powell. It’s all a funny ruse until it turns tragic, in Sean O’Casey’s THE SHADOW OF A GUNMAN, the first in the Irish playwright’s famed Dublin trilogy, and the first of the three to be performed by Philadelphia’s Irish Heritage Theatre. The other two–Juno and the Paycock (1924) and The Plough and the Stars (1926)—will follow with productions by IHT this fall and next spring (in observance of the centennial of the 1916 Easter Rising).

Set in May 1920, during the Irish War of Independence, the controversial two-act tragicomedy, which premiered at Dublin’s Abbey Theatre in 1923, merges realism with poetry in an insightful, funny, and poignant view of O’Casey’s compatriots, who “think a joke is a serious thing and a serious thing is a joke.” Under the astute and sensitive direction of Peggy Mecham (with dialogue and scene coaching by John Gallagher), the IHT’s skillful cast of eleven brings depth and nuance to these flawed but irresistible, and consummately Irish, characters and their struggles, delivering the humor and humanity of their roles in convincing Irish accents. Dexter Anderson stars as the dreamy and introspective romantic Donal Davoren, who quotes Shelley and Shakespeare, makes the telling observation that “No man willingly dies for anything,” and, in his desire to win the affections of Minnie (the glowing Josephine Patane), poses the not-so-rhetorical question, “What danger can there be in being the shadow of a gunman?” Kevin Rodden co-stars as Seamus Shields, a struggling peddler with whom Donal rooms; he is intelligent beyond his station in life, disillusioned with and sarcastic about the republican cause, disenchanted with all the guns in the country, frustrated by the hopelessness of the Irish, and precognitive in his deep-rooted superstitions. Anderson, Patane, and Rodden are three impressive young talents to watch.

The lead actors are supported by a fully engaged ensemble, with not a weak link among them. Keith Miller and Jeff Barth are disturbing in their respective roles as the real IRA bomber and a British auxiliary policeman, and Jimmy Guckin brings just the right bombastic patriotism to Tommy Owens, whose reckless gossip-mongering leads to disaster. Scene-stealing appearances, filled with spirit and silly malapropisms, are turned in by Angelique Bouffiou as the gregarious Mrs. Henderson, Eric Pedersen as Mr. Gallogher, who writes a request for help to the IRA in laughable legalese, John Cannon as the drunken Bible-quoting Protestant Adolphus Grigson, and Mary Pat Walsh as his long-suffering wife. Rounding out the cast is John Reardon as Mr. Mulligan, the sour no-nonsense landlord to whom the under-employed Seamus owes eleven months’ rent. 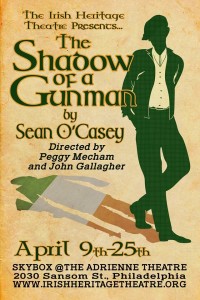 Peggy Mecham’s set design and Kate Danaher’s décor effectively convey the dinginess of Seamus’s room, with grimy walls, simple wooden furnishings, a vintage typewriter and leather-bound books, old lace curtains tacked to the windows, woven woolen blankets, and religious objects that together honor “faith and fatherland.” Lighting by Andrew Cowles and sound by Bob Perdick vividly capture the changing moods and the startling disturbances in the night, and well-fitted costumes by Courtney Boches and Alexa Ross evoke the class and personalities of the characters in authentic fabrics and period style.

In our own troubled times of vigilantism, religious warfare, and terrorist attacks on an international scale, THE SHADOW OF A GUNMAN is a potent reminder that, in the end, there’s nothing funny, heroic, or glorious about terrorism, just deadly. Corpses can serve no “brotherhood, God, or king,” they only serve to invoke an endless cycle of hatred, vengeance, and violence. This is one timeless message that we can only wish would become dated, but remains all too relevant. [Skybox at the Adrienne, 2030 Sansom St.] April 9-25, 2015; irishheritagetheatre.org.