Republished by kind permission from It’s Your Newsfeed 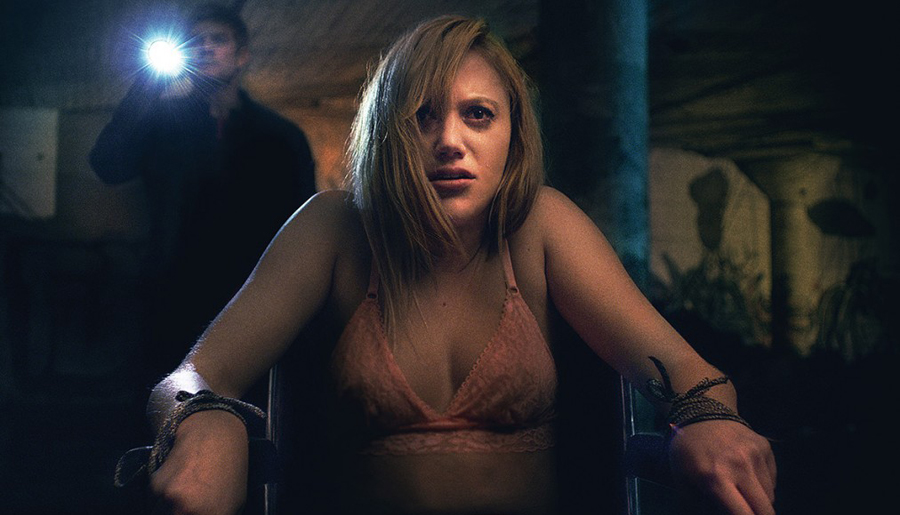 The sophomore effort of three-first-name writer and director David Robert Mitchell is a 100-minute-long teen indie horror flick, and it’s taking everyone by surprise. Originally slated for VOD release, the solid positive buzz surrounding the film led to its limited theatrical distribution. The first really good film of the year, I thought. I can’t wait to see what everyone’s talking about!

Turns out I have no idea what everyone is talking about. It Follows did none of the things for me that my favorite critics said it would. It did little more than annoy me.

The film surrounds Jay (Maika Monroe), a late-teens, early-20-something girl who has an ill-fated (and super duper lame) sexual experience which leaves her with a condition whereby a sex monster follows her with the sole purpose of killing her. Her partner tells her (after drugging her and tying her to a wheelchair. Romantic!) that her only escape from the sex monster is to have sex with other people and pass this condition along, and eventually it will leave her alone in favor of other sex-having-people to kill.

You can just taste the allegory, can’t you? Fortunately, the film didn’t try to push an agenda or serve as a cautionary tale, because if it had I’d call the premise conservative, prudish, propagandist bullshit. GOD FORBID young people have sex. The premise is not what annoyed me. Instead, I was distracted by an  inattention to detail. Primarily: How the hell do people know about this sex monster? Wouldn’t the person that originated the beast be killed before they could form a conclusion as to why this happened?

Horror films in general tend to require a good amount of suspension of disbelief, I’m aware, so I’ll let that one slide in the effort of not killing the plot straight away. Most of my distractions arise from extraordinarily inconsistent production design. The film doesn’t seem to know (or care) where in time the story takes place. The bulk of the movie features old cars, corded landlines, autumn-toned fabrics reminiscent of the 70s, and rabbit-ear televisions playing black and white movies. And yet, the opening scene shows a different ill-fated girl with a flip phone, and later one of Jay’s friends has a pink sea shell compact with a screen like a smart phone, and they’re the only two characters with any semblance of modern technology. Either we’re dealing with a filmmaker who couldn’t make up their mind, or a filmmaker who thinks he’s saying something profound and if you have a problem with it then you just don’t get it. Neither one of these is better than the other; the former shows laziness and the latter shows a kind of pretension I hope to never experience in real life. If there was meaning here, it was totally lost on me.

There also seemed to be some confusion about what time of year the film was taking place. In one scene Jay is swimming in an outdoor pool, and in the next scene she’s in a cable-knit chunky turtleneck under a heavy cardigan, and the rest of the film they’re in shorts and t-shirts and the like. I’ll go ahead and answer my own query: lazy.

I think I can hear the screaming of people condemning my cynicism. But how can I be less cynical when I’m so preoccupied with plot holes and disparities in detail? The design of a film is supposed to add, not detract, from the story, right?

To those screaming, I’ll give the movie its due credit: it is a beautifully shot film. As much as I think tying Jay to a wheelchair to provide exposition was just as excuse to use this shot, the camera mounted on the spinning wheelchair was quite fun. The cinematography aided to the somber mood of the film, which was also bolstered by our strong, full-of-angst lead and supporting cast. Most importantly, the movie was, indeed, scary. (It had a lot of scary moments, anyway.) I’m mainly just glad this movie didn’t act like your typical horror movie.

Something to appreciate about It Follows is the caveat that the sex monster will appear as a person, but never the same person twice, and (though I also have a problem with this) sometimes it can appear as someone Jay knows. This shape-shifting is as unnerving for us as it is for Jay, particularly when it appears as a mutilated woman urinating on the floor or a seven-foot-tall man towering in the hall or a stark naked dude on her roof. That element of surprise was utilized well, but the fact that it could appear as someone known to Jay was not utilized well enough. She never mistook a sex monster for a regular person, and the audience did only once.

A more effective method may have been to take out the regular-person footnote entirely and make it so that all of the sex monsters appear as people who had died of this, the world’s worst STD. That way, when Jay battles the final sex monster, there could have been an added level of understanding on her past. It seems to me the moment would have been stronger if the person the sex monster morphed into in that scene was just a coincidence. (Vagueness for the sake of spoilers.)

My specific gripes could go on (that final battle was flimsy, there was no dramatic build, the excuse about the absentee parents felt like the answer to a question that hadn’t been asked, Hugh is an awful fake name), but more than anything it feels to me like our three-first-name filmmaker got lucky. He had an idea of how a film should look and feel, but cared little about overall the end result, and he’s subsequently lapping up the praise. (I feel this way particularly after reading an interview where he had little of anything substantial to say about his decision making. Just look at how often he says the same thing three different ways.)

So many people are being moved to think and feel things that this movie doesn’t actually provide, which is usually a good thing. It just didn’t happen for me. Their reactions remind me of my own reactions to films like Melancholia and Nymphomaniac, where the audience feeling something in the pit of their soul is almost more important than the story itself. It Follows feels like David Robert Mitchell took a class at the Lars von Trier School of Moodiness, and got a C+.

Maybe I’m missing the point entirely. But It Follows reminds me of a quote from a classic film: “I’ve found that a hit record is like a stew. All the ingredients have to come together just right. Otherwise, it’s just soup.” Except in this case, the hit record is this movie, and I’m eating the stew with a slotted spoon. I’m catching all the hefty bits, but the substance is falling away, and all that’s left is soup.