HAMLET was written around 1600 and the first production outside Europe took place in 1607 on board the Red Dragon, anchored off the coast of Sierra Leone, in the presence of four tribal chiefs. Four centuries later, Zainab Jah (known as “Lady Z” to her friends), who lived with her grandmother in Sierra Leone until moving to Britain aged ten, is now on stage at the Wilma, personifying one of the most talked about young princes in world literature.

In creating a Gesamtkunstwerk (an all-embracing work of art that incorporates a wide range of theater arts), director Blanka Zizka put together a collaborative design team to create a physical and aural world in which “corrupt royalty is surrounded by decaying society.” Zizka went all out to persuade Zainab Jah to play Hamlet, not because this production is the first in recorded history in which a female actor who grew up in West Africa plays the lead, but because in the eyes of the experienced and discerning artistic director of the Wilma Theater, Zainab Jah is perfect for the part. Henrik Eger spoke to the actor about the role and working with the Wilma.

Searching for Hamlet around the globe

Henrik Eger: Blanka Zizka, artistic director of the Wilma Theater, described you as the most suitable of all actors from around the globe whom she “could trust and who would trust me [. . .] an actor who possessed great presence and could easily transform onstage. [. . .] It eventually became very clear to me that Zainab was going to be my Hamlet. She embodies the qualities I’m looking for in an actor exactly.” How did you respond to this unusually high praise?

Zainab Jah: My reactions to Blanka offering me the role of Hamlet was one of absolute shock, or as we say in Britain, I was gob-smacked. I certainly did not expect to EVER be offered the role by anyone, and certainly not by Blanka, since I’d never worked with her. [However,] I was aware of her reputation. I was very familiar with her work, especially since I’m New York-based.

Eger: Zizka also invited you to play Hamlet as the actor “who was willing to work in the physical way I approach rehearsals—experimenting and improvising, without fear.” What stands out for you about the physical aspects of your training as an actor, and the physicality you brought to the stage in some of your performances in the past, both here and abroad?

Jah: I began acting when my grandmother put me in her children’s theater company in Freetown [capital of Sierra Leone] when I was quite young, but later my training was more focused in modern dance and classical ballet in London. This turned out to be a good thing for me as it means I have an ease of movement and a keen spatial awareness, which I’m not sure I would have developed quite as quickly as I did when I became a professional actor. It’s not something I was able to demonstrate as actively in The Convert as I do in HAMLET.

The Convert is set in the late 1800s, in Victorian era Zimbabwe, which means there were corsetry, stockings, garters, high-necked blouses, and very restricted movements. With HAMLET, however, I have ultimate freedom of movement and it definitely affects how the character moves within the emotional and physical landscapes of the production.

Eger: For the past three years, Zizka developed a new ensemble of Philadelphia-based theatre artists to conduct rigorous, two-week workshops, providing extensive physical and mental training, by bringing in some of the best-known master teachers from the US and abroad. Warm-ups and exercises from the training workshops are incorporated into each day’s rehearsal schedule. Which workshops did you attend, and what were the most challenging experiences you took from them?

Jah: I attended the Jean Renee Toussaint vocal and movement workshops [by the Stemwerk master vocal teacher], as well as the swordfight workshops [by fight choreographer Ian Rose]. Both proved to be incredibly valuable. The voice workshops really encouraged us to view the whole body as a vessel for sound, not just the vocal chords but the entire body.

Eger: Tell us more about working with Blanka Zizka and her approach to directing.

Jah: Blanka’s directing approach is extremely focused and thorough. She examines every single moment. Every line is mined and sifted. She is relentless in her pursuit for naked honesty and truth—without clichés of displaying those truths.

Eger: Is this HAMLET ensemble different from ensembles you have experienced at other theaters, both in the US and abroad. If so, how?

Jah: This HAMLET ensemble is different from many I’ve experienced, mainly because we had the good fortune of meeting over a much longer rehearsal period than is normal. Work on the show began as early as last June, starting with the various intense workshop processes. We were able to develop a language, a group dynamic that helped us to bond on a deep level, which in turn provided a safe place that allowed us to be extremely open and available emotionally. 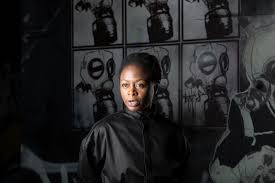 Eger: “HAMLET is a play of edges, of borders. The play sits uneasily astride divides. I think we have found a political and psychological thriller at the heart of Hamlet,” as Wilma dramaturg and literary manager Walter Bilderback sees it. Could you describe your role as Hamlet—thinking, playing, fighting, and sitting “uneasily astride divides”?

Jah: HAMLET is all of the above. It is also an emotional roller-coaster and something of a marathon, but it is not a beast to be wrestled and tamed. It does force one to go to extremes, to climb emotional heights because the circumstances demand it, the language demands it. You cannot half-step any of it.