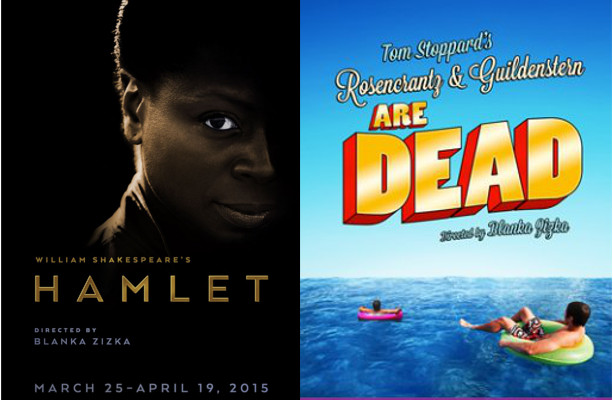 William Shakespeare’s Hamlet and Tom Stoppard’s Rosencrantz and Guildenstern are Dead are two of the best plays in the English language and share most of the same characters and much of the same dialog. How many people must have thought wistfully, “Why doesn’t a company do them side-by-side, using the same actors?”

Well, some of those people have been theater producers. Virginia’s American Shakespeare Center has performed the two pieces in rep several times, and concurrent productions have been seen in the past year in Kansas City, Bidgeport, CT, and New York City. Philadelphia’s Wilma Theater is doing its own dream pairing, concluding its 2014/15 season with successive productions of Hamlet (March 25-April 19) and Rosencrantz and Guildenstern are Dead (May 20-June 14).

“Ever since my production of Our Class, I have been developing a company of actors around my work,” says Blanka  Zizka, the Wilma’s artistic director. “When I decided to do Hamlet with this company in mind, I immediately thought of Rosencrantz and Guildenstern are Dead as a way to give the actors who have smaller roles in Hamlet the leading parts in the next play.”

Hamlet takes place in the royal castle of Elsinore, as the prince of Denmark hesitates and prevaricates, deciding whether to take revenge for his father’s murder. “I’ve been looking at Shakespeare’s Hamlet through the eyes of today’s decaying cities and decaying democracies in a world that is changing drastically,” says Zizka. “Specifically, I’ve been thinking about the isolationism of the ultra-rich, who are making decisions about the world without real engagement with it.”

Stoppard’s post-modern comedy takes up the story of two minor characters from Shakespeare’s work, having the pair question their own role in the drama unfolding around them. “I’m interested in exploring in Rosencrantz and Guildenstern are Dead a way of thinking about the fate and fear of those who are caught in the game of the powerful, without having the power, will, or appetite for risk to change it,” explains Zizka.  “Rosencrantz and Guildenstern undergo a big transformation in [Shakespeare’s] play. Introduced as the best childhood friends of Hamlet, they increasingly side with the powerful, until they become Hamlet’s jailers. In Tom’s play, they are, perhaps, more innocent. What Tom explores is the state of not knowing, not understanding– the waiting, fear, and impulse to go on– to play and theorize in order to avoid thinking about death. They get only short glimpses of the lives of the powerful, which don’t make any sense to them. They have no information.”

Although they are not being performed concurrently, the Wilma’s productions feature the same actors playing the same parts in both plays. (The exception being Zainab Zah, brought in for a gender-opposite casting as the Dane in Shakespeare’s play.) The Wilma has been slowly building a company of actors with a shared artistic vision, offering professional actor training programs that place emphasis on the physiological rather than psychological (naturalistic) style of acting and focus on finding emotions in the body through movement and vocal exercises. The cast of both productions is drawn from this company.

“[My] work is much closer to Artaud and Grotowski’s explorations than to Lee Strasberg’s system,” explains Zizka, contrasting two major theoretic schools of acting. “This company of actors have undergone training with Jean-Rene Toussaint (who also teaches at The Pig Iron School for Advanced Performance Training), Theodoros Terzopoulos from Attis Theater, Athens (who will direct next season’s Antigone, a collaboration between Attis and the Wilma, with actors from both companies), and Ivana Jozic, the leading actress of Jan Fabre’s Troubleyn Theater in Antwerp. In these workshops, focus is placed on developing bodily and vocal flexibility and the ability of actors to transform on stage.”

Rehearsals for Hamlet were preceded by a two-week workshop on Rosencrantz and Guildenstern for actors in both plays. “Through our work on both plays so far, some wonderful surprises have jumped out,” says Ed Swidey, cast as the Player King in both works. “I’ve been struck with the beautiful nod to the power of theater that Shakespeare makes with the Player scenes. Shakespeare seems to be suggesting, in the scene where the Player speaks a speech from a long-forgotten play at Hamlet’s request, that a truthful telling of a make-believe story can have more power to alter the course of human events than actual truth. Hamlet’s first ‘act’ of aggression toward his uncle is to have a play performed to shed light on Claudius’s guilt.”

“The main thing that I’ve taken from comparing the two plays that informs both versions of may character is that, in both, he’s a consummate professional actor,” Swidey continues. “In Hamlet, his simple, truthful on-the-spot telling of a story is enough to change the temperature in the room, to have everyone present instantly rapt, and ultimately to spur Hamlet into taking action that even the revelations of his father’s ghost couldn’t fully convince him to commit to. In Rosencrantz and Guildenstern are Dead, the Player is such a good actor that it’s often (maybe always) impossible to tell if he is acting or not.”

According to Zizka, the major difference between the works is temporal. “As in Beckett, whose influence is palpable, Rosencrantz and Guildenstern put emphasis on being in the moment in order to avoid thinking about the bleak future. They can’t remember the past. (The irony is, of course, that they have no past, since they are characters made up by a writer—a writer who also kills them!) By contrast, Hamlet’s story focuses on the powerful past asking for revenge; it’s the past that drives the action.”

“Stoppard’s genius is in using the events of Shakespeare to explore his own themes,” concludes Swidey. “Shakespeare’s genius is, well, beyond description, at least by me.”

One Reply to “Shakespeare vs Stoppard: Exploring the Wilma’s dream pairing of HAMLET and ROSENCRANTZ AND GUILDENSTERN ARE DEAD”