Republished from NealsPaper.com by kind permission.

Ken Ludwig taps literature’s most iconic detective as he casts his deerstalker hat into the few-actors-many-characters comic mystery arena with BASKERVILLE, a funny, inventive, entertaining take on Arthur Conan Doyle’s “The Hound of the Baskervilles.” Ludwig sets hilarious jokes, puns, and surprises while retaining a palpable semblance of genuine suspense in relating the tale of brutal murders on the moors. Director Amanda Dehnert manages the McCarter Theatre production’s pace well, leaving room for exposition and serious moments while cooking up some marvelous sight gags, vaudeville bits, and physical hijinks.

“The Hound of the Baskervilles” is a gruesome tale built on a family legend. A wicked member of a noble family, Sir Hugo, who has debauched and killed a young village girl, is beset by a large, ferocious animal with sulfurous red eyes while running from his crime on the foggy moors near the family estate in remote Dartmoor, Devonshire. An almost exact event occurs to the more honorable sitting Baskerville baron of 1896, Sir Charles Baskerville, as he stands, smoking peacefully, while waiting to meet someone at about the spot where his unlucky ancestor met his vengeful retributive fate. Alarmed by the unfortunate coincidence, a Baskerville neighbor, Dr. Mortimer, arrives at 221B Baker Street, Marylebone, London to consult with the great Sherlock Holmes (Gregory Wooddell). 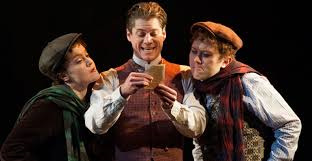 Wooddell is an excellent Holmes, precise and unflappable while enjoying the various stratagems and disguises he employs to catch an insidious murderer. Ludwig gives Holmes all the familiar trappings Conan Doyle made into legend — a literal and admiring assistant in Lucas Hall’s Watson, a simultaneously doting and deprecating landlady in Pfitsch’s Mrs. Hudson, a damsel under duress, and two Baker Street irregulars, urchins who carry Holmes’s messages and do his bidding. As usual, Holmes is familiar with the British train schedules and can worm information out of a London cabbie or two. Holmesian tradition is preserved with a wink from Ludwig who can make comic hay from his lead character’s habits and foibles while paying admiring homage to them.

On Dehnert’s stage, props, hats, and other paraphernalia fly from the wings into a waiting character’s usually sure hands. Chairs, desks, tables, and other elements of Daniel Ostling’s set come rolling into position as if pushed by someone just out of sight at the fringes of the stage. Stanley Bahorek is a comic whirlwind, staid and obsessive as one character and morphing into a toothy, manic Jerry Lewis while playing another. Playing about a dozen characters, including two principals, Jane Pfitsch changes gender so often, she’s probably confused about which dressing room to enter by the end of the show.

Dehnert maintains the balance between comedy and suspense impressively. Dehnert’s excellent ensemble keeps Ludwig’s lark of a play sailing smoothly and amusingly. Comedy is king, but Dehnert and company make it so you fear occasionally for characters, such as when Watson is hit on the head with a large boulder and Ludwig foreshadow the large, vicious beast that killed Sir Charles and terrorizes the Devonshire landscape.

Philip S. Rosenberg’s lighting adds to the grimness and hazard of the Dartmoor setting, especially when he represents the ‘hound’ in shadow. The howls of the beast, various gun shots, and several storms sound especially perilous thanks to the design of Joshua Horvath and Ray Nadelli. Daniel Ostling’s set can change from a bleak terrain or a flower-strewn copse in a matter of seconds, especially when those plants come pummeling in or Rosenberg’s lighting alters the mood. Jess Goldstein joins the ranks of the traditional with his handsome costumes. Holmes, Watson, and other men looked especially well turned-out. Goldstein is to be congratulated on the quick-change outfits that always looked fully draped. Read the full review >>[Matthews Theatre at McCarter Theatre, University Place and College Road,Princeton, NJ] March 10-29, 2015 mccarter.org.