With the departure of its managing director and artistic director in quick succession, Plays and Players Theatre is undergoing some changes. The theater dropped the final two shows from its season, replacing them MZ FEST, a series of female-created works in progress running March 31-April 5, 2015. 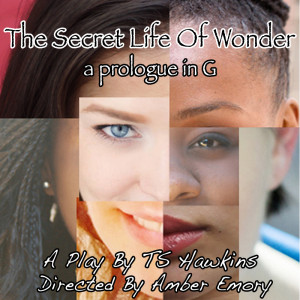 The Secret Life of Wonder: a prologue in G is the first full-length play by actor, poet, and playwright TS Hawkins. Directed by Amber Emory, who also produces the festival, Secret Life explores the lives of seven girls (Nastassja Baset, Marisol Custodio, Jackie DiFerdinando, Kimie Muroya, Zoe Richards, Rebekah Sharp, and Kaitlin Pribulsky) being escorted into womanhood, as a foreshadowing to Ntozake Shange’s work “for colored girls who have considered suicide/when the rainbow is enuf”.

Shit Men Have Said to Me: Tales of How Men and Women Communicate is a new devised work by ReVamp Collective, a woman-centric theater company. Directed by Carly Bodnar, the work blends together the thoughts and interactions confronting societal realities from catcalling to slut shaming. Features Lisa Fischel, Colleen Hughes, James Kern, Slade Roff, and Adam Rzepka, with art installation by Lauren Doyle.

The third piece, Take/Sacrifice, will explore how we sacrifice others to obtain the things we desire. Directed by Sarah Mitteldorf of Kaleid Theatre, the piece takes place in a landscape littered with those we have sacrificed to secure the things we want. Surrounded by iconic figures and archaeological mysteries, our wishes become reflections of ourselves – what we want from the world, how we want the world to behave, and the lengths we are willing to go to make it so. What do we cling to? What do we want so much that we’ll destroy each other for it? Features Pratima Agrawal, Jess Brownell, Jessica Jacob, and Rachel O’Hanlon-Rodriguez. [Plays and Players Theatre, 1714 Delancey Street] March 31-April 5, 2015; playsandplayers.org.