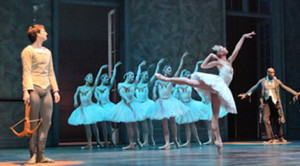 If you care about things like gender equality, cultural sensitivity and breaking convention, Swan Lake represents everything that is wrong with classical ballet. But if you want to think about the male gaze, a film studies theory that many dance scholars now apply to the issue of feminism in dance, if you want to think about issues of authenticity and cultural appropriation and the problematic history of “character” dances, if you want to see the traditional ballet form challenged but simultaneously upheld (or if you just want to get out of the snow and treat yourself to an evening of stellar dancing), then Christopher Wheeldon’s adaptation of the Tchaikovsky classic, performed this weekend and next by Pennsylvania Ballet, is just the ticket.

I’ll admit that I’ve been looking forward to this one for a while, having missed the storybook ballet when it was presented back in 2011 amidst the Black Swan Oscar frenzy. Swan Lake is a classic for a reason, and its numerous re-workings run the gamut from Matthew Bourne’s (which features for just a few moments at the end of Billy Elliot and explores homoerotic themes through a cast of all male swans) to Wheeldon’s, which places the work in the context of the Paris Opera House and employs a show-within-a-show framework, complete with a sinister “patron” who represents the abbonés of nineteenth-century Paris (they were granted behind the scenes access in more ways than one).

The ballet opens like an Impressionist painting coming slowly to life: ballerinas dressed in long rehearsal tutus and shawls prepare by pinning their hair and adjusting the ribbons on their slippers. It blurs the lines between art and artifice with can-can dancers concluding the gala that would have been the prince’s birthday celebration in the original production. (In a nod to Toulouse-Luatrec and the Moulin Rouge, their skirts are printed with black cats and windmills).

Due to the physical demands of Swan Lake (it clocks in at just under three hours and the dual role of Odette/Odile is one of the most difficult of the canon to dance), PA Ballet has five different couples dancing the lead roles including Mayara Pineiro and Jermel Johnson, Oksana Maslova and Alexander Peters, Brooke Moore and Ian Hussey and Lillian DiPiazza and Lorin Matthews, but on its snowy, Thursday night opening, it was Lauren Fadeley and Zachary Hench.

Fadeley was charming as the coquettish Coppélia last season and surprisingly successful in her embodiment of the Siren in last month’s Prodigal Son (not surprisingly because she lacks talent or emotional depth, simply because in her case they’re usually employed in service of the ingénue, not the femme fatale) but she crafted a realistic portrayal of both the tormented (Odette) and the tormenter (Odile). Her fouette turns in Act III—perhaps one of the most well known examples of virtuosity in ballet—seemed a bit out of time for the first few revolutions but they finished to a well deserved applause and her tragic exit at the end of Act IV was perfectly ethereal and otherworldly; it was hard not to cry.

Thursday night’s performance also confirmed that Zachary Hench will remain a perennial favorite, despite his retirement. The role of the Principal Dancer (in which he is both the prince and a dancer performing the role of the prince) was created for Hench in 2004 and it’s easy to see why: he is passionate but boyish, a strong and confident jumper but also a brilliant and generous partner.

Amy Aldridge also deserves mention—her Russian Dance was precise yet sultry—but the real accolades should go to the corps. Wheeldon’s choreography for the swans, sometimes as few four in number but sometimes as large as eighteen, is never dull. Patterns emerge and then give way, ever evolving and fluid, just like the mysterious lake from which the ballet takes its name. The soft port de bras belie powerful footwork, encompassing the juxtaposition between hopelessness and strength, between evil spells and love eternal, that makes Swan Lake, in any iteration but especially this one, such an enduring classic. [Academy of Music, 240 S. Broad Street] March 5-15, 2015; paballet.org.