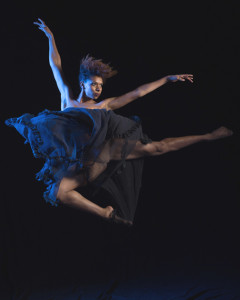 The Black Pride and Black Power movement gave rise to the visibility of the Afro hairstyle in the 1960’s, as it became a symbol of ethnic pride and represented “black beauty”. In a performance on Friday February 27, 2015, at the Mandell Theatre in Philadelphia, Dance Iquail used the tutu, which is an iconic costume in classical ballet, placed it atop the heads of the dancers and shifted its representation from a symbol of white ballet to a symbol of black pride. This could and probably should have been the main choreographic motif for Dance Iquail’s Black Swan. Unfortunately, with multiple sections that unsuccessfully connected and movement vocabulary that failed to embody the sensibility of the vocal styling of the Nina Simone soundtrack, Black Swan left me with plucked feathers rather than soaring inspiration. A four-year project in the making, Black Swan, based on the program notes, had five objectives:

Were all of these accomplished? I would argue not.

To be fair, some of those things may have been achieved in minimal doses at various points throughout the show.

I know from personal experience that it can be challenging to tackle any political issues using dance as your medium.

So I applaud Dance Iquail for taking on the task of embarking on a journey to expand the discourse regarding race and ballet.

With the current social issues of police brutality against people of color propagating a wide cross-section of America, the need for discourse surrounding racial tensions and inequality is paramount. Dance Iquail had the perfect opportunity to remove the shades from the dark room of repressed ballerinas and dig deep to reveal a clearer narrative. There was a solo danced while racial slurs flashed across a projection screen, there was a group section that used lights to separate the white dancer from the black dancers but then the line became “blurred” as I was not privy to the reason that caused some dancers to cross over while others stayed behind and there was a exquisitely danced duet by a male and female dancer that showcased the strength and beauty of the elegant, strong, black female dancing body. However, with the only sign of Black Swan being a politically charged work coming from the Nina Simone soundtrack, I was led to believe that the piece was more about the dancing and less about the message.

Director/ Choreographer Iquail Shaheed, developed a concept that was the fruit of many articles written about the struggles of black ballerinas. Articles like “Where Are All the Black Swans?” by Gia Kourlas , “Building Diversity in Ballet: Black Swans are Still Too Rare” by Virginia Johnson and “Dancing in the Margins: Experiences of African American Ballerinas” by Nyama McCarthy Brown, all served as catalysts for this undertaking. So imagine my surprise when the first person to enter the stage was a white dancer.

Wearing a sequined corset and an asymmetrical tutu constructed to be short in the front and longer to the back, the lone while female dancer effectively demonstrated her command of the classical ballet vocabulary. A stream of African American dancers who each performed solos until they all congregated on stage followed her. While on releve in the center position, the Caucasian dancer was surrounded by her four black counterparts who lifted and carried her. The placement (center stage) and the position (releve) of the white dancer, made me uncomfortable as the image of the elevated white dancing body made me ask the question “where are all the black swans”?

The exquisite technical dexterity of his fine dancers provided a wonderland of physical admiration. Attitude turns, fan kicks, tilts, back undulations, arabesque turns, and grand jetes, were all performed with precision and ease.

The piece came to a climax when Shaheed had his dancers sit at the edge of the stage facing upstage as they joined the audience in watching a video montage of ballerinas past and present. A wonderful collage of memories that provided hope.

Looking at the screen, I was presented with the faces of black ballet.

Then the integrity of this section was interrupted when it was followed by camp and humor. The lone male dancer of the cast entered the stage wearing the sequined corset, tutu and pointe shoes. He proceeded to perform Italian fouettes, piques, pirouettes and arabesques on pointe, all the while interacting with a female dancer in a comical way as if to show her that he was better on pointe than she was or could be.

Some may say this was commentary on neutralizing gender roles and gender specific dance steps but I would argue that the timing was poor and the transition into such a statement was inexplicably abrupt.

There is no easy or simple way to raise awareness about social issues but Black Swan, conjured up a painful past, questioned the present and challenged our uncertain future. If the piece was refocused on one central idea of the five noted in the program, I think it would be more successful. [The Mandall Theater] February 25-28, 2015; danceiquail.org.