Students from Drexel University’s music industry program are breathing life into music tracks that have been silent for more than 40 years. Through a partnership between Drexel’s Antoinette Westphal College of Media Arts & Design and Reservoir, an independent music publisher based in New York City, a set of unfinished songs recorded on the Philly Groove Records label in the 1970s could find their way onto your playlist this summer. Students will be presenting some of the first finished tracks during an event at Drexel’s URBN Annex at 6 p.m. tonight, March 3, 2015.

Professor Toby Seay, is teaching the undergraduate class, “Uncovering the Philly Groove,” where students work with raw vocal and instrumental tracks to complete songs that were originally started well before they were born. “This is a chance to jump time in recorded music history, using the skills they’re learning today to resuscitate a project that was started by professionals years ago. For the music industry faculty, Uncovering The Philly Groove is a chance to demonstrate, in a very tangible way, the kinds of creative opportunities the music business continues to offer.” 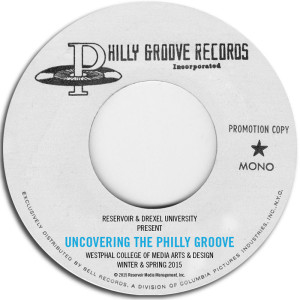 Reservoir, which has more than 100 No. 1 singles to its name, acquired classic soul and R&B label Philly Groove Records in 2012.  In addition to well-known works, such as The Delfonics’ “Ready Or Not, Here I Come” and “La-La Means I Love You,” the acquisition also included many tracks whose production hadn’t survived the label’s 1974 termination. Partially finished songs, recorded by undiscovered acts like Navy Star, The New Concept, and Music Machine, remained in storage at the studios where they were being recorded or in private collections.

The partnership between Reservoir and Drexel came together as the publisher embarked on a search for these forgotten tracks. As it happened, approximately 43 of them had been residing in the archive of the Sigma Sound Studio –an iconic Philadelphia recording studio used by some of the top R&B, pop and rock artists during the ‘70s, ‘80s and ‘90s. When the studio closed its doors in 2003, Drexel acquired its trove of music, including the Philly Groove tracks.

Seay, who manages the university’s audio archives, including Sigma Sound Studios Collection, connected with Reservoir’s VP Faith Newman to reunite Drexel’s Philly Groove tracks with the rest of Reservoir’s stock. In the process, the pair, along with Marc Offenbach, an assistant teaching professor in Westphal College and an advisor of its student-run record label, and Reservoir’s marketing & communications director Catherine Addo, hatched the plan to have Drexel students work on resurrecting some of the songs.

Under Seay’s guidance, the class will first tend to the technical upkeep of 16 tracks that Reservoir has presented the students to work with—developing file names and metadata for each track. For the creative portion of the project, students will compile the recordings’ raw vocal and instrumental takes, using modern mixing technology to add a sonic profile to each song that wouldn’t have been possible when they were recorded.

“I’m hoping to see students take on multiple interpretations of each track,” Newman said. “Sonically, it would be amazing to contrast sounds that might have been used on these recordings in the ‘60s or ‘70s with what a contemporary producer would do with them today.  I’d like to see the class embrace the creative challenge of realizing both what was intended when these songs were recorded and what we, years later, can imagine.” [Drexel’s URBN Annex] March 3, 2015; drexel.edu.