We’re all for the Philadelphia International Festival of the Arts (PIFA)–it’s great to have a major springtime performing arts festival in the city. But is it just a little strange that in a festival with a theme of Paris 1910–20, few of the shows and none of the literature seem to mention that there was a little war going on, one that became known as The Great War (and later World War I)? More than 1.3 million French soldiers were killed, more than 4.3 million were wounded, and then a worldwide influenza epidemic followed the war, killing millions more? In other words, the period of 1914-1920 was a period of death and destruction that had never been seen in the history of humankind.

It was not a nice time. 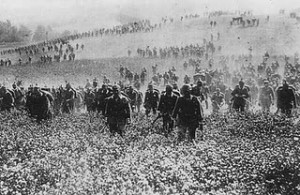 It’s a little bizarre to make a Paris theme of a performing arts festival in the first place (let’s build an Eiffel Tower!), unless you were really going to examine the ideas, philosophies, and goings on of the time in a serious manner, and build art from that. But to apply this “joie de vivre” distortion on this brutal time period with complete disregard to the most devastating, unextractable, and prolonged event of the timeframe is a such profound blindness to actuality as to be offensive. I suppose the PIFA planners assume they (the Parisians of 1910-20) lived as many do today, with Iraq and Afghanistan as willfully disregarded wars, except for simple geography–the Western Front came some 30 miles from Paris.

The theme itself smacks of something you might find at The Flower Show (which had the “Springtime in Paris” theme this year, as well as an Eiffel Tower). Is it not bizarre this obsession with pretending to be Paris or to recreate a different city within our own city for some finite period time? So we can what, forget where the hell we are? If you want to be taken serious as a arts festival, you need more than dress up, you need more than an “amusing” theme to appeal to Main Line board members, who want to paint themselves as Parisian whores and call themselves sophisticated. You need to have substance.

From PIFA’s website: “Paris from 1910 – 1920 was a blank canvas waiting for the next generation of innovators to usher in a new age of inspiration” and “It’s in the spirit of artistic experimentation and uninhibited creativity that Paris 1910–1920 is reborn in Philadelphia.” I’m pretty sure the artists in Paris very much had the war on their minds–but not us, we see only uninhibited creativity, with no real idea what the hell that means. (People tend to be less inhibited when they think, “We’re all going to die!”).

So enjoy all the quality performances that PIFA is sponsoring, but remember, 1910-20 was not such a great time to be in France. In fact, one out of five of you would be dead and two others would be missing legs, and the rest would be starving, merde alors!