Everyone wants to feel special. This longing to be acknowledged is at the core of Kirsten Greenidge’s MILK LIKE SUGAR, a play about dreams and the reality.

The play starts with three high school girls who think mostly of boys and iPhones, or boys with iPhones. We quickly discover one of the girls, Margie (Danielle Leneé), is already pregnant and full of girly fantasies about motherhood, demonstrating the bitter difference between physical and emotional maturity that makes teenage pregnancies so problematic. Her friends Annie (Nastassja Baset) and Talisha (Melanie Lawrence) want to feel as special as Margie – and get Coach diaper bags as baby shower gifts, of course – so in between texts, tattoos and funny taunts they make an impulsive decision to get pregnant as soon as possible.

The play’s main focus is on Annie, who gets rejected by her chosen baby daddy Malik (Brandon Pierce), because he has bigger plans for himself: he doesn’t want to get stuck in this place, but to go to college and have a better life. The recent problem of a college degree failing to guarantee a better life aside, his ambition is an example to Annie that there are other paths out there. Annie tries to find her way, no longer entirely comfortable with Margie and Talisha, yearning to be loved by her viciously unhappy mother (Kimberly S. Fairbanks) and intrigued by the unpopular but energetically optimistic Keera (Curtisha Starks). 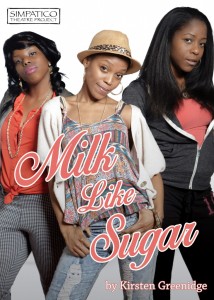 Despite its heavy subject matter, the play is full of fun moments, charming dialogue and witty observations. Much of that comes from the characters that successfully embody both tragic and comedic elements, as the best characters often do. Annie’s mother particularly – played by Kimberly S. Fairbanks, who seems to radiate painful bitterness and anger – rings true as the example of a life wasted in day-to-day survival, but she also has some of the funniest lines in the play. Nastassja Baset, Melanie Lawrence and Danielle Leneé have engaging chemistry that’s fun to watch, but they can also deliver the darker and more dismal aspects of their characters.

The script in MILK LIKE SUGAR has an occasional tendency to spell out ideas in a way that sounds like the playwright preaching rather than the character talking. It’s a common enough problem in plays where the characters are not sophisticatedly self-aware of their shortcomings and capable of dissecting them out loud à la Hamlet. With characters like this, the playwright is supposed to only show, not tell, who these characters are and trust the audience to get it. It doesn’t always feel like Kristen Greenidge trusts her audience and it results in some cringeworthy expositional moments.

Despite its flaws, MILK LIKE SUGAR is a powerful play that offers voices we don’t hear often enough on stage. Like its characters, the play isn’t perfect, but it is special. [Simpatico Theatre, The Skybox at the Adrienne Theatre Center, 2030 Sansom Street] February 11-March 8, 2015; http://simpaticotheatre.org.