Penelope Reed, accomplished actor and executive director of the Hedgerow Theatre in Rose Tree Park since 1991, takes the lead as Mary, the senior of three bright and independent Victorian ladies who travel into the future in Eric Overmyer’s ON THE VERGE. Reed was directed by the much younger Kittson O’Neill, artistic associate at the InterAct Theatre. O’Neill grew up in Connecticut and Australia, has acted in many theaters in the Philadelphia area, New York, and various regional theaters. She has directed many plays, appeared in a number of films, and also works as a dramaturge and teacher. 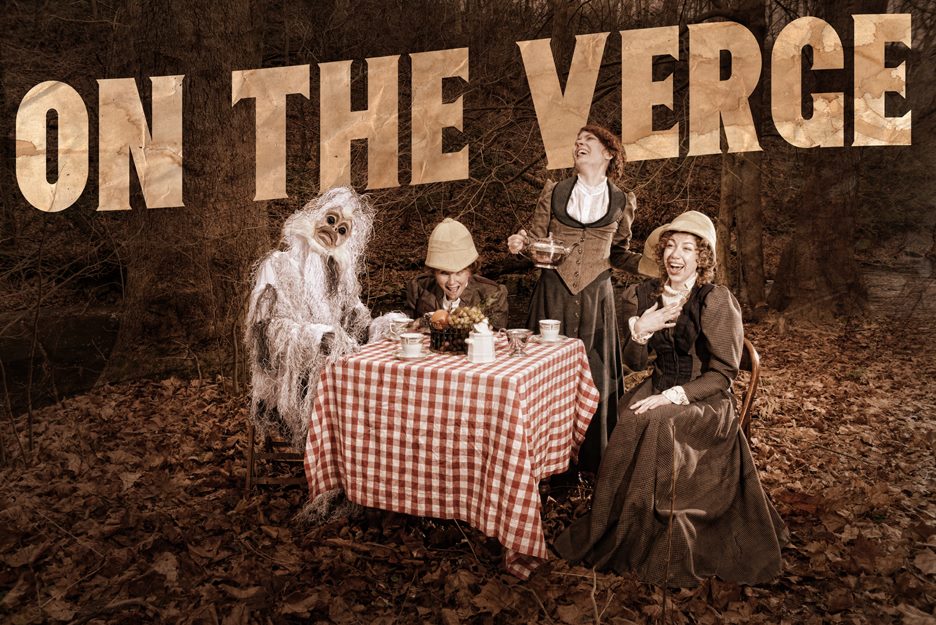 Henrik Eger: Looking back at your many theater experiences, what do you remember about the first time you directed a play?
Kittson O’Neill: Well, since I only just embarked on this part of my artistic life, I remember it clearly. My overwhelming emotion was terror, but since I am lucky enough to have always had amazing actors around me, my terror soon turned to joy. I love acting and I love watching my fellow actors so rehearsal is a blessing twice over!

Eger: Are you saying that your work at the Hedgerow was your directorial debut? That sounds exciting.
O’Neill: I was a replacement director for this show, so I didn’t know my actors well. I had met them all before we began, but some for only a few minutes, so the first day of rehearsal was a huge question mark. Would we know how to talk to each other? Would they see the play the way I did? ON THE VERGE is a big and complicated play. It asks a lot of the actors, physically and emotionally. I knew that I was going to push them and push the designers. I was delighted to find they were more than on board! Our cast has actors in the first years of their careers and Penn [Penelope Reed], who has been acting everywhere and in everything. That could make for a bumpy ride, but every one of them said “yes” to every insane thing I asked them to do. I am so grateful.

Eger: Tell us more about your interactions when directing the almost legendary Penelope Reed—on stage and off stage.
O’Neill: I honestly didn’t fully understand Pen’s history when we started rehearsal, thank goodness! And she never pulled rank in any way. It wasn’t until I googled her for fun during tech that I realized what an incredible career she has had. By then it was too late: we were all having too much fun for me feel intimidated. Also, my mother is a theater maker in Albany, NY and she and Penn have a lot in common, so all through the process I felt a protectiveness and cheekiness toward Penn, perhaps because making a play with her felt, literally, familiar.

Eger: Describe those moments where you and Reed dialogued, and perhaps even changed roles during certain moments of the rehearsal process.
O’Neill: There was a lot of dialogue, particularly as we worked to unearth our take on the end of the play, but there was never a change of roles. Because I am also an actress, I am particularly mindful of trying not to impose my aesthetic as an actor on my cast.

Eger: Where there any funny moments in your interactions with Reed—on stage and off stage?
O’Neill:I had no shame about showing Penn exactly how I wanted her to do her drunk burlesque. Watching YouTube videos of pole dancing with Penn and the rest of the cast will always be one of my favorite rehearsal moments ever! She never balked. She just looked me in the eye and said, “Do you want me to shake my booty here or further downstage?” How can you not fall in love with that actor?

Eger: If ON THE VERGE is a celebration of self-discovery for the three Victorian ladies, what did you discover about yourself as a director working with four great actors (Brock Vickers, Jennifer Summerfield, Maryruth Stine, and Penelope Reed), especially the most senior of these wonderful performers?
O’Neill: I am much more comfortable with the steering wheel than I thought I was. I asked a lot of this cast and the designers. They gave me their trust and that helped me to really trust myself and my instincts. I am still a young director, so I learned a lot for my next show, but I’m at ease in the driver’s seat. That feels nice. I also discovered that I really love goofy jokes—the goofier the better.

And that honesty really is the best policy. ON THE VERGE is a very heady play. It’s easy to get lost in the ideas, but when we came back to truthfulness and honesty, everything clicked. That’s how I work as an actor, and it was so satisfying to see my personal aesthetic working on in a full production, too.

Eger: What advice do you have for young directors working with seasoned actor-directors?
O’Neill: The greatest respect you can show actors is to treat them like actors, like all the actors in the cast. Trust yourself and your vision and they will, too.

Eger: I enjoyed your production of ON THE VERGE. Is there anything else you would like us to know about your work with Reed and her colleagues?
O’Neill: Hedgerow really took a chance on me as a young director and I think that’s because they are an actors’ theater first and foremost. Penn and Jared [Reed, Hedgerow’s artistic director and Pen’s son] saw my long history as an actor as a real qualification to direct, and I am SUPER grateful to them for that. Also, I was very lucky to have an amazing group of designers around me as well and without them and the tireless crew, we would not have the show we have.

One Reply to “Intergenerational Theater, part 1: Kittson O’Neill talks about directing the veteran cast of ON THE VERGE (Hedgerow)”