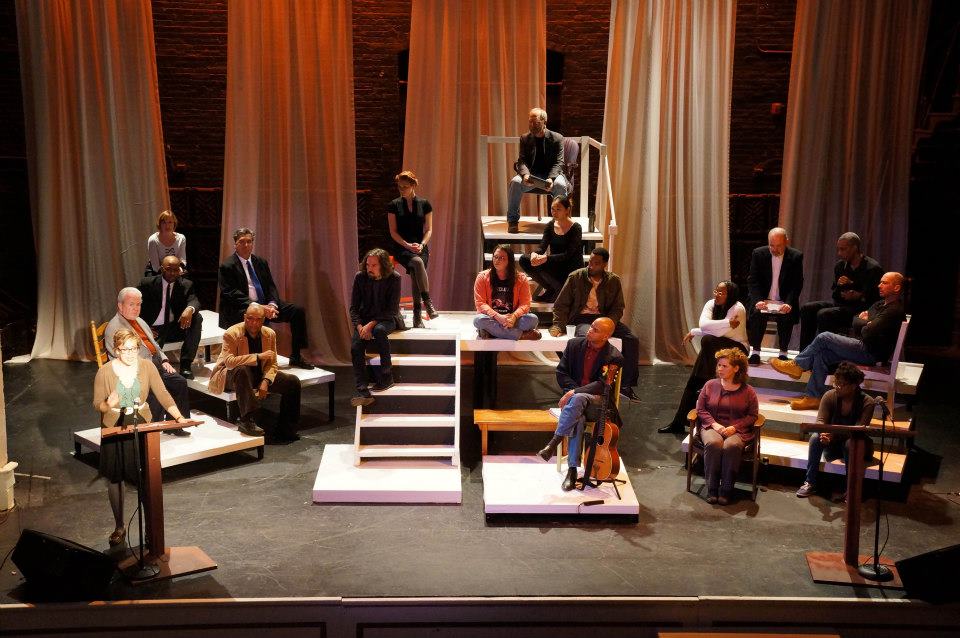 “This time we have to succeed”, Naomi Klein told Occupy Wall Street protesters in 2011. Klein sentiment is echoed in VOICES OF A PEOPLE’S HISTORY OF THE UNITED STATES, now onstage at Plays and Players: the struggle for equality has been on-going since the birth of this nation and every generation has hoped to finally be the one that succeeds.

Directed by John Doyle, the play shows us how almost anyone can be a target of cruel injustice whether because of race, gender, sexuality or other chance of birth. The conclusion drawn through the selections is that the current form of capitalism demands someone—or almost everyone—to suffer inequality in order for it to function. For a play that starts with the insistence it’s not political, that is quite the stance to take.

Many of the chosen speakers and speeches are from the latter half of the 20th century, and there’s also a significant amount of material from the last five years. This sense of the contemporary adds to the feeling that this play is less a historical account of resistant voices and more like a political call to action today with references to history.

That’s not to say it’s bad the play is political or contemporary. Without the passion of belief in the need and possibility of a political change VOICES would turn downright disheartening. After all, it showcases hundreds of years of seemingly futile attempts to reach that elusive state of equal opportunity the Declaration of Independence promises. The speeches are not only provocative but full of infectious hope that this time, united, we really will succeed. [Plays and Players Theater, 1714 Delancey Pace] January 29-31, 2015: playsandplayers.org.