Sincerity is a buzzword of the last few years. It’s one of those elusive qualities we might seek in our favorite indie song or coffee shop: like authenticity or originality. George Burns famously thought it was the secret to success: “if you can fake that, you’ve got it made.” Team Sunshine’s new production, THE SINCERITY PROJECT seeks to capture that elusive quality on stage, exploring the vulnerability of a heart-to-heart conversation with first-person storytelling, performance art, physical theater, music, and dance. 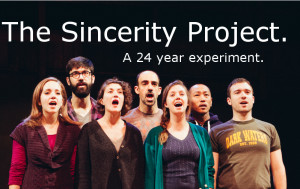 Workshops of THE SINCERITY PROJECT have appeared as part of Fringe Arts Scratch Nights and First Person Arts RAW. As they launch the finished production, Team Sunshine is setting ambitious goals: they hope to make it the first of 13 versions over the next 24 years! A sort of theatrical 7 plus Seven.

Can theater be sincere? What does it mean to reveal personal secrets onstage? Is truth a form of performance? Find out. The show runs December 4-13, 2014, at FringeArts [140 N. Columbus Boulevard] fringearts.com; teamsunshineperformance.com.