An extended version of this review was published on NealsPaper.com. Republished by kind permission.

Although Lindsey Bliven, playing the title role, rouses the Walnut Street Theatre audience in numbers such as “Anything Can Happen” and “Supercalifragilisticexpialidocious,” the outstanding moment of Wayne Bryan’s staging of MARY POPPINS is relatively quiet scene which contains no magic or music.

A new governess arrives at Cherry Tree Lane. Not Mary Poppins, but Miss Andrew, “the Holy Terror”, the strict nurse Mrs. Banks summonses to mind her unruly children and to please Mr. Banks, who constantly refers to the upbringing Miss Andrew provided him. Wearing a coat with pointed cap sleeves, Deborah Jean Templin troops on to stage as if carried by a Poppins-like wind and manages to terrorize all in her wake. Jeffrey Coon’s Mr. Banks, far from being delighted, flees for his very soul. Templin, manages to do what no other performer in the production accomplished: she brings the play a boil and has it command attention.

The story is clear, even with the significant changes book writer Julian Fellowes makes from the movie. There are special effects of varying fascination, and there’s Matthew Bourne’s elaborately choreographed “Supercalifragilisticexpialidocious,” which is in itself a reward. But few delights, no matter how creative, lift this MARY POPPINS up to the atmosphere. It’s as if a final bolt of energy has been denied it.

Then comes Templin’s Miss Andrew, and from the most unexpected place, there’s a power surge. Templin’s launches into Miss Andrew’s featured number, “Brimstone and Treacle,” and the Walnut stage comes to roaring life. The actress fills the stage with her threatening voice and more threatening moves and expressions.

It is hard to pinpoint why the Walnut’s MARY POPPINS doesn’t take off from the beginning. Bryan has been provided with all the elements he needs. J Branson’s set is bright enough. David Elder is a likeable Bert who seems to enjoy the freedom his character has to break out into dance at the least provocation. Bliven is spit-spot as Mary Poppins. Cameron Flurry and Jacob Wilner are lively enough as the Banks children. But everything, even the magic, happens matter-of-factly. There no sense of wonder, or “how did they do that?” in Mary Poppins’s tricks.  It may be timing, it may be a familiarity with “Mary Poppins,” but effects don’t have sufficient zip.

Nor do dance numbers. The reason “Supercalifragilisticexpialodocious” is so effective is it involves a lot of synchronized arm motion and the spelling of the tongue-twisting caterpillar of a word in mime. This adds liveliness and variety to the proceedings. Also, Bliven and Ellie Mooney, set up the number well by having a decent book scene of Jane and Michael shopping in a “chat shop.” 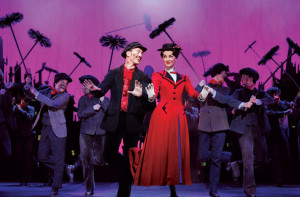 While adapting MARY POPPINS for the stage, Fellowes wisely preserved several of the key tunes from the 1964 movie, but he didn’t always provide natural set-ups that lead the to songs.“A Spoonful of Sugar” is promulgated by a mishap in the kitchen that seems more self-consciously slapstick than comic.

This inclusion, rather than smooth elision, of songs presents a challenge to a director of  MARY POPPINS. Richard Eyre even stumbled over it in the original London production of Fellowes’s script. The Broadway rendition and its national tour seemed to solve the dilemma. Bryan has not totally made the songs seem like the next natural step to the story. The new songs, “Practically Perfect,” “Playing the Game,” and “Anything Can Happen” integrate better into the action that leads to them. Of the original songs, only “Let’s Go Fly a Kite” and “Step in Time” take off from a relatively smooth runway.

The 1964 Disney movie is light, magical, and fantastic. Using animation, it stresses the wonderful talents of Mary Poppins and the jauntiness of Bert. The stage adaptation of MARY POPPINS is more in keeping with Travers’s book. Mary is more austere and much more curt and sardonic in some of her responses to Jane, Michael, and Mr. Banks. The mood is darker.

In doing the play, especially during a holiday season, a director has to decide between approaches. Does one accentuate the fluff while adding something about Mr. Banks’s dilemma to give a core of reality to the proceedings? Or does one show a household in disarray and a troubled man, warring against his own nature, struggling to get it right amid precocious children and wife who is not happy with rigid Edwardian conventions? Bryan chose a middle route between lightness and gravitas. He doesn’t get so dark that MARY POPPINS loses its appeal to children. Nor does he plumb the malaise in George’s soul.

Bryan’s production has no center. His MARY POPPINS is not dull or unenjoyable, but it needs small infusions of speed and energy to make it more vibrant and to hide the seams in Fellowes’s script. Read the full review >> [Walnut Street Theatre, 9th and Walnut streets] November 4, 2014-January 4, 2015; walnutstreettheatre.org.

One Reply to “MARY POPPINS (Walnut): Flying between lightness and gravitas”