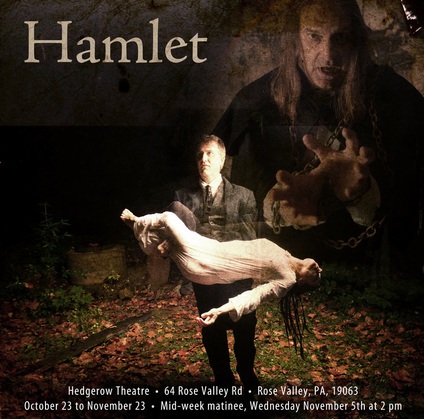 Henrik Eger: Do audiences expect “their” Hamlet to reappear like the ghost of Hamlet’s father?
Dan Hodge: HAMLET is surrounded by mystique and reverence that makes it seem unassailable. It is a play approached with ingrained expectations. This production was an enormous exercise in letting go, because there is no way to please everyone. I had to create an event that felt truthful to me and to engage a room full of skilled artists.

Eger: What were your main goals directing HAMLET at the Hedgerow?
Hodge: I was interested in clarity and drive. This production is an answer to the Macbeth I directed for Hedgerow last year, which was conceived as a thriller for their fall slot. I aimed to create a HAMLET that was as brisk, arresting, and engaging as the Scottish Play.

Eger: As an actor-director, what shaped your decision-making processes?
Hodge: I am always interested in actors who readily have access to deep humanity. In that way, Jared Reed, a seasoned and thoughtful actor, is an excellent fit for Hamlet. This Hamlet could not be a confused twenty-something, but an adult robbed of his faculties by an older generation. It’s captivating to see adults with clear ideas of their lives, suddenly losing all mooring by circumstances ordinarily within their control.

I wanted to situate the play beyond a doublet-and-hose time period, so audiences could spend their time watching people with whom they can identify, rather than giggling up their sleeves at the funny clothes. Framing HAMLET in an Edwardian setting clarified the aesthetic of the production and the roles each character assumed.

Eger: Apparently, you enriched the production with lines from other Shakespearean plays. Could you elaborate on your inspirations behind those alterations?
Hodge: Cutting is always tricky. HAMLET is a long play, and of Shakespeare’s great tragedies, it is the loosest in structure. In delivering a production that could speak to the needs of the audience, I focused intently on the plot of the play—which is straightforward. This meant streamlining secondary plots and providing some greater context. I removed anything in the way of comprehension, resulting in many historical and mythical allusions falling by the wayside.

Before Hedgerow, I never added text from other Shakespearean plays into my productions. Last season, I added a speech from Hamlet into Macbeth, which successfully heightened the dramatic tension. Returning for this show, I felt uninhibited about creating a text that might yield the greatest dramatic potential. In a play as sprawling as HAMLET, with only a handful of actors, some scenes require additions or subtractions to allow for quick scene changes.

Eger: Could you give some examples of how you altered or enriched HAMLET?
Hodge: When I interpolate text from other Shakespearean plays, it is frequently for keeping characters engaged in recognizable relationships while smoothing over major cuts. To streamline the text of Hamlet, I removed whole scenes, which occasionally left me with the dilemma of having the same characters together [on stage at the same time], causing a substantial shift in relationships. Late in the play, after the scene at Ophelia’s grave, a similar interaction occurs between Hamlet and Horatio. There was a major tonal shift, and I borrowed lines from Othello, and cribbed some of King Lear to create a transition that remained true for each of the characters.

The largest addition occurs for Claudius in the scene after Hamlet drags Polonius’ body from his mother’s chamber, and Claudius dispatches Rosencrantz and Guildenstern to find him. There, I excised a series of short scenes. This meant that as soon as Claudius sent them out, I needed them to return with Hamlet. To make this jump in time, I added a speech for Claudius. There is a wonderful piece in Measure for Measure where the Duke meditates on the value of life in the midst of hardship. Adding this speech as a soliloquy gives us a peek into the life of this murderous king, and gives [actor] John Lopes something to enrich his character’s journey.

Eger: Usually, Ophelia is portrayed as an innocent, naive adolescent. You chose an older actress, Annette Kaplafka, who struck me as more mature and stronger than any Ophelia I had ever seen.
Hodge: It is important that Ophelia mirrors Hamlet. Since our Hamlet is undeniably 40, it compelled me to find someone who could stand as his equal. I am unconvinced by the traditional portrayal of Ophelia as a “wilting flower.” In this production, initially, she is a person with great confidence and self-possession, which is stripped from her over the course of the play. Watching someone lose everything, when she begins with so much, provides a stronger springboard into the madness that follows.

Eger: You chose Jennifer Summerfield to play a female Horatio, usually one of Hamlet’s closest male friends, leading to some interesting male-female interactions.
Hodge: Jennifer is an actor that I go out of my way to work with. I knew her keen insight, as well as her chemistry with Jared, would yield great dividends. The relationship between Hamlet and Horatio is one fraught with complications—if one chooses to explore them. Horatio is an intellectual equal to Hamlet. She is the only person in whom he can fully confide. She is also an outsider at the Royal Court, so making her an educated, unmarried woman in this time period heightens her “other-ness.” It’s intriguing to see Hamlet die in her arms. She feels like another great, unfulfilled love in his life.

Eger: I wonder what Shakespeare would have said about your creative casting and borrowing lines from some of his other plays? Could it have been: “There is nothing either good or bad, but thinking makes it so”? Thank you, Dan Hodge.

One Reply to “To alter or not to alter, that is the question: Dan Hodge on directing HAMLET in unorthodox ways”