Republished from The Dance Journal

Finnish choreographer Jorma Elo has been shuttling back and forth to Philly this fall to make ‘Gran Partita’ a new work to premiere on BalletX in their current program with Olivier Weaver’s 2013 piece ‘Instantly Bound’ and ‘Increasing’ which Matt Neenan premiered last summer at the Vail International Dance Festival.

Elo is resident choreographer at Boston Ballet, and is also one of the most prolific guest choreographers working internationally, with over 60 ballets to his credit, often choreographing five or six pieces a year, on both large and small companies- from American Ballet Theatre, New York City Ballet, Nederlands Dans Theater, Pennsylvania Ballet- just to mention a few. After his gig in Philly, he is creating an evening length ballet for the Finnish National Ballet, where he started as a dancer at age 16.

As busy as he is, Elo couldn’t have appeared more serene at the Performance Garage setting his new piece ‘Gran Partita’ on BalletX, even though it was admittedly still very much in development late in October. The choreographer was confident enough to conduct an open rehearsal at the Performance Garage to give a glimpse. The excerpts in decidedly scrambled order, but the rehearsal segments instantly evoked the ballet‘s edgy atmosphere and Elo has a mood that is inspired by Orson Welles’ film-noir classic ‘Touch of Evil.’ 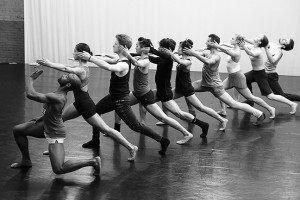 The ballet has the stylish contrasts of mach-speed, even perilous ensemble movement set to disquieted music by Alban Berg, followed by a stream of sensuous male-female duets with silky lift patterns that keep evolving as the music moves to selections of Mozart and Bach.

Elo‘s detailing is coming into focus, but he is still shape shifting the order. The dancers repeat a segment and a seemingly very agitated Elo singles out Daniel Mayo, who apparently botched a finishing phrase. Elo tells him snarkily ‘No, Danny you don’t have this at all.” Christine Cox, the emcee of the rehearsal annotates from the sidelines, “Just Jorma’s Finnish sarcasm,” Mayo comes forward and corrects the move twice, which lands him in a crouched position. Elo walks over to him stoically, puts his hand on his shoulder, and says “so good, perfect.”

Elo was back rehearsing in the Performance Garage and had time to discuss the ballet and working with essentially a new company of dancers. Elo‘s previous work was in 2006 for the premiere of ‘Scenes View 2‘ the first year BX co-artistic directors Matt Neenan and Christine Cox were launching the company.

“When I worked last time with Christine and Matt they had several dancers from Pennsylvania Ballet, which was great, they were classically trained, but naturally their main focus was different,” Elo recalled. “Now this is a group of dancers specifically for this company and they make it look very smooth, very fast. So I try to keep up with them and challenge them. I feel very comfortable since day one with this company. They have invited me with warm hearts,” he said. .

It is also part of his approach to spend downtime with the dancers over lunch and in the days before the premiere take morning class with them, otherwise looking very relaxed, not concerned with the sharpness of his battement, but not looking like he had retired from performing a decade ago at age 43.

“I started quite late compared to a lot of choreographers and really fell in love with choreography quite late,” he recalls, “I had done smaller works while when I danced, but they were more to find out if I had the skill to do it. So I feel like I need to work a lot. The only way is to get in the studio with dancers since I don’t have my own company, have no other opportunity to play around with ideas,” he said. He said he feels so fortunate to have the opportunities now to make up jumping in the game so late.

Elo adamantly does not like to categorize his choreography. “I like very different kinds of movement. As a dancer, I started doing a lot of Cunningham and Graham, and then I went to more to classical ballet and then was exposed to a variety as a dancer, so I had a large spectrum of styles, all equally interesting to me. I don’t consciously think of anything particular style when I go into the studio. They are accessible to me and it just happens.”

Elo is known for his relaxed interplay with dancers and encourages them to reflect their ‘primal’ aesthetic impulses with dance and music, “that just come up in the flow of the moment, that I have with the dancers in the studio. What kind of musicality I can get from those various styles that are in me,” and he Elo acknowledges there is a big difference with this generation of dancers schooled in several techniques. “You don’t have to go to the basics anymore, wherever I want to go choreographically,” Elo reports “they are ready for it.” [The Wilma Theater 265 S. Broad Street] November 19-23, 2014; balletx.org.