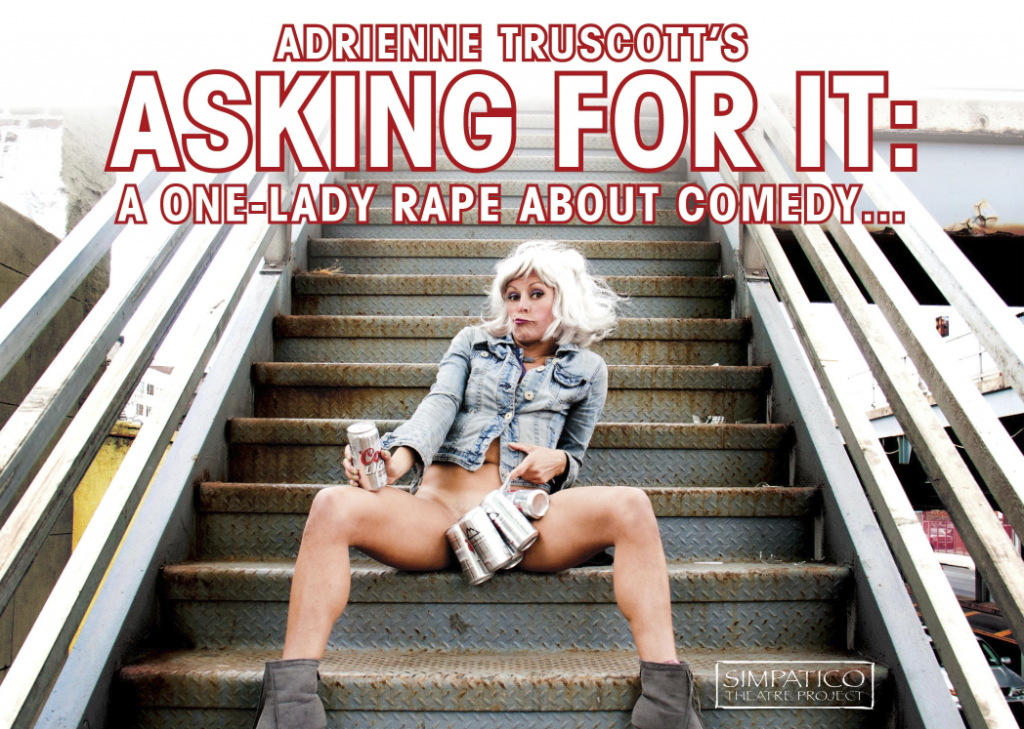 Walking into ASKING FOR IT, one senses the smell of freshly poured beer, the charm of a nighttime comedy club, and a calming comfortable environment. One might expect a comfortable fourth-wall-breaking stand up comedy routine. But the audience learns the life lesson; “ask and you shall receive.” Adrienne Truscott’s wonderfully elaborate and complicated one-hour performance is a confounding “comedy show” with rape jokes, nudity, and heavy doses of reality.

The show begins with a comedy rookie (Truscott, who also wrote and directed) running through the house naked from the waist down. At first the audience is quite uncomfortable with this informality, but we come to forget about it and pay close attention to the comic’s performance rather than her costuming, until of course, she reminds us that her genitals are exposed. The comic then begins a routine that looks quite rehearsed, putting the audience on edge already because most pros tend to make their “shows” conversational. One gets the sense that this “comic” is not very good at what she does. The punch lines get worse and worse as the evening goes on, making the audience groan more often than laugh. The comic often refers to blowing a “rape whistle” on stage if anyone in the audience feels uncomfortable. By her final jokes, not a single laugh is heard in the house.

I might have questioned what I was doing wasting my night on tasteless and terrible comedy. Watching the piece, however, an overwhelming thought comes across the minds of the audience: this is not just bad puns and awful one-liners, but a slap of reality. Rather than a comedic nightmare, ASKING FOR IT is a brilliantly choreographed masterpiece of commentary on politics, media, and society.

Truscott’s performance is excellent. Her act is so believable I almost find myself questioning whether or not this was a real comedy routine. The design of the show (by Allen Radway, with lights by Andrew Cowles) adds to the authenticity of the work, as do special lighting effects, such as projections of Truscott’s body.

Truscott’s title expresses it best: she asks the audience to open their eyes and listen. For the whole performance, they do just that. [The Skybox at The Adrienne Theatre, 2030 Sansom Street] October 24-November 16, 2014; simpaticotheatre.org.

2 Replies to “ASKING FOR IT (Simpatico): You asked for it, you got it”