Adapted to the stage by Andrew Leslie from Shirley Jackson’s cornerstone horror novel, THE HAUNTING OF HILL HOUSE is a seasonally spooky treat brought to audiences by Philadelphia’s BrainSpunk Theater. While troubled woman Eleanor Vance (Layne Marie Williams) and sensory perception specialist Theodora (Mahogany Walker) agree to stay at a notoriously haunted house, the house reveals more than slamming doors, misplaced objects, and cold drafts. Rich with sorrowful history and tales of death and failure, “the fascinating secrets of Hill House” find mysteriously chilling ways of helping the guests to relive the past, all under the supervision of curious researcher Dr. Montague (Charles Michael Bendas), heir to the house Luke Sanderson (Seth Linehan), and unfriendly housekeeper Mrs. Dudley (Catherine Deremigio-Fichera).

The labyrinthine dialogue may not be the most exciting to listen to, as every actor in this show voices complicated and intricate lines at an impressively and almost incomprehensibly fast pace. The set, adorned perfectly with Victorian paintings, vintage furniture, and elegant artifacts, snakes audiences into a terrifying encounter that Eleanor and Theodora have with a laughing, evil entity who seems to mock their fear. 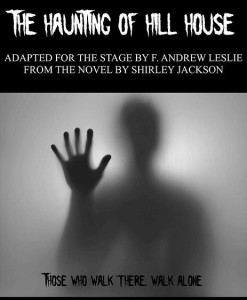 After the scariest and most thrilling scene of the play, the characters decide they must stick together in order to continue Dr. Montague’s mission, and fully protect themselves. The main parlor becomes the unlikely group’s “center of operations”, and although the idea of sticking together seems necessary in theory, Hill House’s tenants grow  impatient and annoyed with one another.

Just after another good scare and a strange message appears in the upstairs hallway written in chalk, Dr. Montague’s pushy wife (Kris Andrews) and snobby pal Arthur Parker (John Schultz) show up to further confuse the situation. Mrs. Montague attempts to communicate with the spirits of Hill House through a special tool in a way most unpleasant to everyone except Arthur, who delivers some of the quippiest jokes of the show while hitting on handsome Luke.

After an eerie incident in the ominous “stone tower” puts an unknowingly entranced Eleanor in great danger, the other guests decide that she must vacate Hill House before the conclusion of Dr. Montague’s experiment. Having “fallen under the spell” of the murderously enchanting house, Eleanor is desperate to stay. Though the unseen ending is totally anticlimactic, it is true to the original story of Hill House, and is, indeed, an ending. Do not expect to be truly rattled, but do expect to be told what is considered one of the most revered scary stories of all time, during ‘The Haunting of Hill House’.[Christ Church Neighborhood House Theater, 20  N. American St.]  October 18-November 1, 2014; brainspunktheater.com/.